The lawns and gardens are manicured to perfection. The grounds surrounding the estate sprawl majestically to the water. And the megamansion that sits at their center is an imposing structure of red brick and ivy—more a monument to the power of discreet, old money than an actual home where a family might make happy memories.

Writer/director Cory Finley initially treads lightly around this pristine setting before tearing right through the middle of it and exposing its toxic heart. The idea of something sinister simmering within a genteel, refined place like coastal Connecticut may not sound novel. But Finley, a young playwright, pulls off a tricky feat with his feature film debut. He combines the delicious bitchiness and verbal acrobatics of “Heathers” with the structural rigidity and tonal restraint of Yorgos Lanthimos, the Greek director of such off-kilter dramas as “Dogtooth” and “The Lobster.”

“Thoroughbreds” is classically Hitchcockian in its smoldering homicidal tendencies, yet bracingly current with the spot-on casting of Anya Taylor-Joy and Olivia Cooke as childhood friends who reconnect and reveal the internal damage they’ve become skilled at suppressing. Yet despite all these comparisons, Finley has created a film that feels original and alive.

Try as they may, his characters find that their wealth and privilege can’t insulate them from who they actually are. And so when they give in to their true natures, it’s simultaneously frightening and liberating. What starts out as darkly funny becomes deeply unsettling, and the road to get there is suspenseful and precise.

Taylor-Joy and Cooke co-star as Lily and Amanda, teenagers who were close as children but have grown apart over the years. Outwardly, they couldn’t seem more different, even though they both hail from the same opulent suburb. Lily is the picture of perfectly coifed preppy chic—so accomplished and brilliant that she finished boarding school early and has come home to begin an internship with a prestigious financial firm. Amanda is makeup-free in her messy waves and overalls—and at the film’s start, she’s come to Lily for tutoring as she recovers from a bloody scandal involving her prized horse. Lily is jittery and polite; Amanda is deadpan and direct. The tension is palpable from the start.

But before either of them has said a word to the other, composer Erik Friedlander’s percussive score puts us on edge, especially with his reliance on slow and steady bass drum. And cinematographer Lyle Vincent’s expert use of Steadicam to navigate the myriad hallways and grand rooms within Lily’s home makes this luxurious place feel like a maze of shadows and secrets.

As these young women dance around each other and feel each other out, Amanda is the one who emerges as the more assertive of the two, even though she’s the one in need of Lily’s help. Cooke is just a master of delivering brutal, low-key one liners. She might just be a sullen, detached teen—or she might be a straight-up sociopath. And Taylor-Joy reveals a chilly narcissism beneath Lily’s polished veneer. Her ability to lie and manipulate with cool efficiency is just chilling.

The push-pull of their burgeoning friendship is riveting to watch—like a delicate boxing match. As they warm up to each other (if you could call it that), they challenge each other to explore their physical and psychological limits with seemingly silly games, like tricking their bodies into crying or seeing who can hold her breath underwater longer in the pool. These individual moments create a mounting tension.

Ultimately, they find they have a common goal—or at least a target for their rich-girl isolation and frustration—in the form of Lily’s cruel and condescending stepfather, Mark (Paul Sparks). He’s sadistic and obsessed with fitness, and he doesn’t even bother to hide his contempt for Lily. Surely, the world would be a better place without him.

But they’ll need assistance in putting their plan into motion—and that’s where Anton Yelchin comes into play in one of his final film roles. Yelchin—who died in 2016 at just 27 years old—provides some much-needed humanity within this rarefied setting as a low-level drug dealer named Tim, who reluctantly agrees to help them with their deadly idea. Yelchin is humorously swaggering and delusional but there’s a vulnerability within his striving and climbing that makes him a sympathetic figure. And it’s so good to see him on screen one more time.

The tone of “Thoroughbreds” grows significantly darker as it creeps toward its climax; the house grows more ominous and Finley’s technical precision becomes even sharper. He’ll use rack focus to snap us to attention, or alternate between sound effects and silence to suggest violence in a way that’s far more disturbing than actually showing it to us.

“Thoroughbreds” may reach the finish line a little quickly and neatly, but at least it never turns soft and nice. Finley remains true to his vision, and it’s a thrilling spectacle to behold. 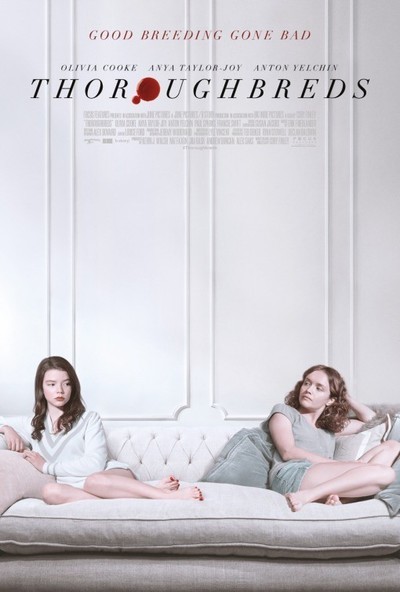