Camilla Nielsson’s purposefully infuriating documentary, “President,” covers a 2018 presidential election in Zimbabwe that is so transparently fraudulent, one could easily imagine it being satirized on an episode of “Veep.” After 38 years of oppression under the Zimbabwe African National Union-Patriotic Front (ZANU-PF) regime, president Robert Mugabe is forcibly ousted from power in the military coup of November 2017. Yet this seeming move towards reform quickly proves to be a mere power play, as fellow ZANU-PF member Emmerson Mnangagwa plans to take his place in yet another rigged election. His charismatic opponent is Nelson Chamisa of the Movement for Democratic Change (MDC) Alliance, a 40-year-old lawyer who fought against President Mugabe’s regime when he was a student activist, resulting in him getting beaten with a metal pipe that fractured his skull.

He is clearly the more popular candidate, drawing enormous crowds while Mnangagwa can’t even fill a stadium after bussing in alleged supporters. And yet, it comes as no spoiler when Mnangagwa insists that he won, despite the fact that the numbers never add up in his favor, with 200,000 extra votes being tabulated in a given province. When asked how sixteen counties could’ve possibly reported identical election results, the ZANU-PF’s laughable lawyer argues that only a behavioral scientist could account for how such an amazing coincidence could occur. Not even a second grader who cheated on his math test could get away with this pathetic lie—at least, one would hope.

Executive produced by Danny Glover and Thandiwe Newton, “President” serves as a nightmarish follow-up to Nielsson’s equally riveting 2014 documentary, “Democrats,” an intimate look at the three-year process in which Zimbabwe’s Parliamentary Select Committee (COPAC) was given the futile task of drafting a constitution that would bring democratic laws to Mugabe’s dictatorship. Both films feature a great deal of unsettling laughter from both politicians and citizens, who appear to be voicing their awareness that the very notion of democracy being attempted in Zimbabwe is a farce. Indeed, Paul Mangwana, a lawyer and unequivocal “yes man” for ZANU-PF, openly admits to Nielsson that “the game of politics is pretending,” and that any effort to subvert Mugabe’s system is “useless.”

In my review of “Democrats,” I wrote, “How Nielsson could capture such honest responses—from a man whose very life depends on his ability to deceive—is one of the film’s lingering mysteries.” Mangwana resurfaces in “President” during a crisis meeting held by the Zimbabwe Election Committee (ZEC) one week prior to the election, where attendees voice their outrage that MDC was denied access to the voter roll, ballot papers and the ballot printing process itself. In a feeble attempt at drowning out these criticisms, Mangwana whines about these “unfounded” allegations before storming out of the room, sporting all the Trumpian behavior of a true loser.

Of course, none of this is a laughing matter, especially when six civilians are fatally shot by soldiers following a protest against ZANU-PF, as the camera lingers on the literal blood in the streets. Nielsson’s film isn’t suspenseful so much as it is characterized by a looming dread. In many ways, this election serves as a microcosm of democracy’s rapid decay on a global scale, and not even the optimistic swells of Jonas Colstrup’s occasionally intrusive score can trick us into believing that Chamisa stands a chance at being declared the winner, despite the fact that the MDC’s “parallel voter tabulation process” estimates he won by 69,000 votes. There’s no question as to why the people love Chamisa. At a rally, he charms the crowd by sending up the ZANU-PF’s glaring crime of enabling $15 billion to vanish with no arrests.

In response to President Mnangagwa founding an anti-corruption unit, Chamisa quips, “A mosquito can’t cure malaria.” No wonder the ruling party can only manufacture their win through bullying and intimidation, causing this film to make a fitting double bill with Lisa Cortes and Liz Garbus’ study of voter suppression in the United States, “All In: The Fight for Democracy.” We hear of how village chiefs in Zimbabwe told citizens at the voting booth that they would be denied food if they cast their ballots for Chamisa, whereas the ZANU-PF promised food in exchange for votes. Other voting offices were simply raided by thugs likely hired by Mnangagwa, who would beat anyone tasked with tabulating the votes in an accurate manner.

Though Chamisa claims change can be delayed but not denied at the film’s end, the subsequent years have only affirmed that such hope remains as elusive as Godot. An estimated 17 people were killed and 17 women were raped by security forces during protests in early 2019, and these atrocities committed by Zimbabwe’s government have reportedly increased since the dawn of the pandemic. Just this past October, Chamisa survived two assassination attempts as he succeeded in registering voters who have become disgusted with ZANU-PF. It’s no surprise that many of the crew members listed over the end credits of Nielsson’s film are anonymous, since so many of them risked their lives to ensure this footage saw the light of day.

The travesties of justice on display throughout “President” become so repetitive and inevitable that it renders one exhausted, grateful if only that the killing of democracy has been so clearly and meticulously documented. No matter how bracingly intelligent the MDC’s lawyer was when making his case, Zimbabwe’s Supreme Court either refused to or were forcefully prohibited from doing the math. When ZANU-PF’s win is ultimately defended as being “independent of figures,” an opposition member laughs that this was a “selection” rather than an “election.” There’s a telling moment when police in riot gear attempt to block Chamisa’s press conference following Mnangagwa’s preordained victory—until they realize it might not look so good to the international press assembled there. “With the eyes of the world on us, we delivered a free, fair and credible election,” Mnangagwa declares during his hastily scheduled rebuttal press conference. The eyes of the world were watching alright, and with a defeated sigh, they collectively rolled. 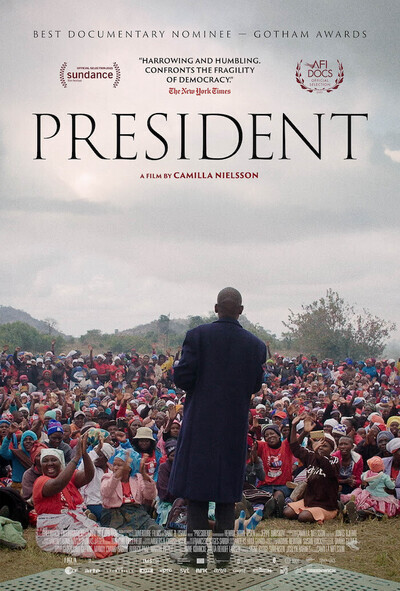