Joe Pesci’s infamous “You think I’m funny?” scene in Martin Scorsese’s 1990 landmark, “Goodfellas,” will be remembered chiefly for earning the actor a well-deserved Oscar. His character, Tommy DeVito, is a monster of such fearsome volatility that he turns roomfuls of strangers into appreciative studio audiences, eliciting canned laughter fueled entirely by self-preservation. They laugh, so that they may not get bumped off. One of the greatest masterstrokes of the scene is its use of wide angles, enabling us to survey the faces of various bystanders, whose expressions morph from amusement to grim seriousness, as DeVito cheerfully plays their emotions like a piano.

I was frequently reminded of this sequence while watching Camilla Nielsson’s riveting, ultimately enraging Zimbabwe-set documentary, “Democrats.” It charts the three-year process in which the parliamentary committee, COPAC, was tasked with drafting a constitution that would allegedly bring democratic laws to their nation’s dictatorship ruled by President Robert Mugabe. Though Mugabe is largely left offscreen, he makes two key appearances that bookend the picture, and it’s here where Nielsson’s depiction of Zimbabwe most strikingly mirrors Scorsese’s portrayal of the restaurant where DeVito dines in “Goodfellas.” Though Mugabe addresses crowds of citizens with a pleasant, almost fatherly demeanor, he slides in declarations of his own power and dominance that trigger riotous guffaws of support from the submissive audience. It’s not for nothing that Mugabe leaves the podium after a speech early in the film, before quipping, “I forgot to launch the thing”—the “thing” being the gathering process that will compile the views of Zimbabweans to be incorporated in the Constitution. Clearly, Mugabe has little regard for any views other than his own.

A pre-title montage skims all-too-briefly over the crimes Mugabe has committed against his own people, including the ethnic cleansing that claimed at least 20,000 lives between 1982 and 1985. At the forefront of Nielsson’s focus are the chief negotiators selected to draft the Constitution: Douglas Mwonzora, a human rights lawyer from the opposition party, MDC-T, and Paul Mangwana, a lawyer and unequivocal “yes man” from Mugabe’s party, ZANU-PF. There’s a great deal about these men that can be perceived purely through their body language. Mwonzora remains a stoic figure throughout, even after being jailed for three weeks in yet another feeble governmental attempt at intimidation. His composure is cool and collected, while his eyes remain fixed on the glimmer of freedom starting to materialize on the horizon. Yet for Mangwana, that glimmer is nothing more than a mirage. The pervasive laughter rupturing from his mouth suggests that he knows the notion of democracy in Zimbabwe is a farce. “The game of politics is pretending,” he admits to the camera, and later reveals his belief that any attempt at subverting Mugabe’s system is “useless.” How Nielsson could capture such honest responses—from a man whose very life depends on his ability to deceive—is one of the film’s lingering mysteries.

There’s an irony here worthy of “Catch 22” in the idea of people being expected to speak their minds in a country that has continuously ordered them to keep their mouths shut. As Mwonzora journeys to various public events and surveys the opinions of citizens, he finds them voicing identical views in favor of Mugabe (there are also shades here of “The Manchurian Candidate”). Mangwana lets out his standard chortle upon hearing that a meeting of Zimbabweans was preceded by a prayer warning them against opposing Mugabe. Any Catholic who’s had to endure a homily about the sinfulness of voting for a pro-choice candidate will undoubtedly be able to relate. Yet Mangwana’s smile fades once members of the public finally begin to speak out, championing progressive policies that cause him to sulk in his car, looking profoundly miserable. After a clause is discreetly inserted into the Constitutional draft, reportedly by the “drafters,” that disqualifies the incumbent by limiting his leadership to ten years (Mugabe has been President since 1987 and was elected Prime Minister in 1980), Mangwana’s tone changes entirely, verging into outright desperation. Suddenly, he finds himself in the crosshairs of his own party, and reports of attempted assassinations followed. If his own agenda wasn't so despicable, he’d be downright sympathetic.

“Democrats” won the Best Documentary prize at this year’s Tribeca Film Festival, and it’s easy to see why viewers were so taken with it. The film’s question of how democracy can be achieved in a rigged system is especially timely, considering how America’s corporate powers have caused countless citizens to feel as if their voices have been silenced. What’s lacking from the film is any substantial exploration of the Constitution itself, and the democratic laws that would’ve made it a game-changer in Zimbabwe, had any of them been put into effect. Though a sequence late in the film hints at Mwonzora and Mangwana developing a semblance of teamwork while completing the final draft, we don’t get a good enough sense of how this occurred or how it impacted their work. Regardless, the film’s final moments are shattering, affirming the futility of their efforts amidst the hollow laughter of the oppressed. It’s no surprise that Mangwana’s brother, Nick, ZANU-PF’s U.K. chairman, has dismissed the film as a “sitcom” designed to demonize his party. I’d sure love to see his rebuttal video. 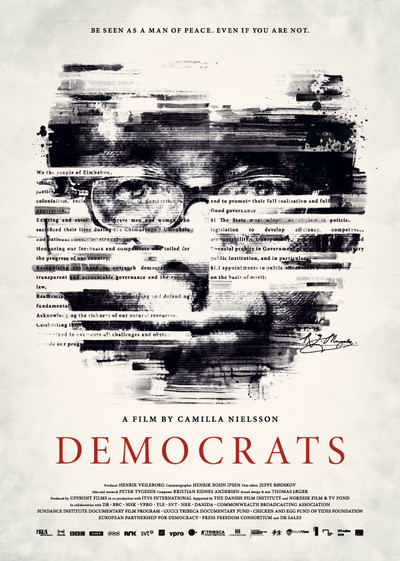