All In: The Fight for Democracy

The scariest thing about Amazon’s voter suppression doc “All In: The Fight for Democracy” is how it slowly builds and enforces its thesis that history is repeating itself. Gone are the days of blatantly unpassable literary tests and poll taxes prohibiting non-White people from the ballot box. Instead, the new voting prerequisites come wrapped in concerns about fraud. These new requirements—extra identification, removal from voter rolls for supposed inactivity and closing of polling places—were for your own good, we are told, so that democracy can function fairly and correctly. The Republican makers of these new laws failed to acknowledge their effect on people of color and those in low-income areas, and why these new rules are necessary.

An explanation comes from Stacey Abrams, the Democratic gubernatorial candidate in the 2018 Georgia election. “When elected officials feel they may not have the power anymore, they have two choices: They can either be more responsive to those they lead, or they can eliminate the people they have to answer to.” The latter seems to be the chosen path; there are numerous scenes of people waiting for hours outside polls only to discover they are either not registered or have multiple forms of I.D. rejected. This leads to disenfranchisement, as people don’t think the system works for them. As a result, they don’t vote. “All In” uses the past to show how the right to vote has always been a struggle throughout history for people who weren’t rich White men.

Directors Liz Garbus and Lisa Cortés frame their history lesson, and their call to action, with the story of Abrams’ upbringing, education and subsequent entry into politics where she became the first Black woman to run for governor in either major party. The 2018 election results were extremely close and highly contested, with Abrams ultimately losing by 50,000 votes. We learn that, a month prior to election day, her competitor and the eventual winner, Brian Kemp put over 53,000 voter registrations on hold, most of them from minorities. After refusing to explicitly concede (her fiery speech is included here), Abrams started an organization to fight voter suppression.

“All In” could have easily been a justifiably angry look at what happened in 2018. Instead, the film introduces several scholars, lawyers and other experts to trace the right to vote back to the Founding Fathers. In America’s beginning, the only ones who could vote were White male property owners. After the passing of the 15th Amendment, Black men were also allowed to vote and hold office, at least until Reconstruction ended. Meanwhile, women marched and protested, but would have to wait for the 19th Amendment to be ratified.

“The greatest moments of progress are followed by the most intense periods of retrenchment,” says author Ari Berman as he describes how such an important period of advancement for Black men after the Civil War was followed by nearly 100 years of Jim Crow. Andrew Young points out that one vote put an end to Reconstruction, allowing for the issuance of laws and practices designed to circumvent the 15th Amendment. These details are provided by Carol Anderson, whose every appearance has the viewer hanging on her every word. She and Abrams are the most memorable talking heads in “All In.”

Young’s comment about one vote bringing about all that suffering could also be used to describe what happened after the Supreme Court gutted the Voting Rights Act in 2013. Just as the removal of troops from the South post-Reconstruction beget the numerous bad faith actions designed to keep Blacks from voting, the Supreme Court decision allowed these same states to repeat this cycle. Their rationale was that, since Barack Obama was elected President, voter suppression no longer existed.

It’s here where Garbus, Cortés and producer Abrams really lean into how the racist practices of the past affect not just Black and brown people, but Asians and Indigenous people as well. Some of the details are absolutely terrifying, with examples showing how different regions did their best to prevent their minorities from voting before the Voting Rights Act was passed. Over the past seven years, the same path is being followed by seemingly innocent laws that sound less egregious but are actually perpetrating the same restrictions. The late John Lewis appears here, both as a U.S. Representative and the man whose skull was cracked on the Edmund Pettis Bridge in Selma, to remind us of the importance of the right to vote.

Abrams holds court at the center of “All In: The Fight For Democracy.” When not dispensing information on ensuring your electorate voice is heard, she offers up stories about her pastor parents’ rules for her. They demanded she not only got a good education, but that she also helped those less fortunate. “We were poor too!” Abrams amusingly says, mimicking her younger self’s disbelief at the latter demand. She also tells a story of how she was denied the same audience with the governor of Georgia that every high school valedictorian received because a White cop didn’t think Black people could be that smart. There’s a bit of humor in the tale when her father explains how he used words unbecoming of a pastor in response to the guard’s actions, but the outcome is a sad reminder of the power of stereotypical perception.

It’s pure coincidence that Abrams would once again be denied entry into the Governor’s mansion many years later, but rather than harp on that, she and the filmmakers fill the film with what we need to know before voting on Election Day. As a result, “All In: The Fight For Democracy” is a valuable public service wrapped in an educational, informative and engaging documentary. 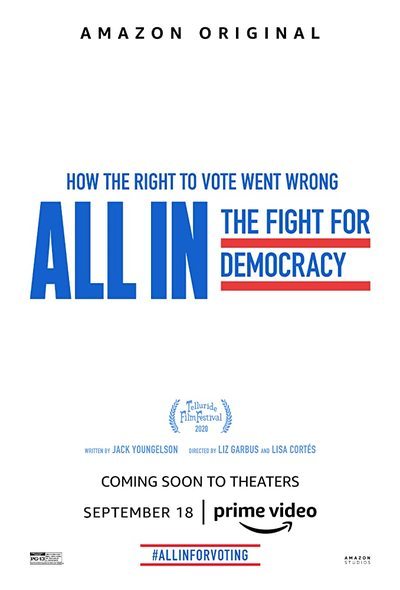 Stacey Abrams as Herself