“Pokémon Detective Pikachu” wants to be “Who Framed Roger Rabbit?” for a new generation, but often feels more like “Teenage Mutant Ninja Turtles II: The Secret of the Ooze.” Stuffed to the edges with references to the world of the international phenomenon known as Pokémon, Rob Letterman’s PG-rated adventure film starts with a clever premise and interesting world-building, but then succumbs to a common problem of the modern blockbuster—shallow, CGI-heavy noise. For the incredibly low bar of the video game adaptation genre—which this technically is as it shares elements with a 2016 Nintendo DS game—this one comes out better than average, but it is unlikely to work unless you’re a loyal fan of everything that is Pokémon. (Related: My 4th grader loved it.)

Justice Smith stars as Tim Goodman, a young man who lives on the outskirts of Ryme City, a place that has become a model for human/Pokémon cohabitation. For years, humans partnered with Pokémon and trained them for battle in arenas, but a man named Howard Clifford (Bill Nighy)—the Steve Jobs of the Pokémon world—wanted a place where there was more comfortable freedom for the two species to co-exist. So people like Police Lieutenant Hide Yoshida (an unbelievably wasted Ken Watanabe) and young reporter Lucy Stevens (Kathryn Newton) have Pokémon partners but there isn’t an emphasis on training, fighting, etc. Clifford is nearing the end of his life and will hand his empire over to his son Roger (Chris Geere), who looks like he may not be as peace-seeking as dear old dad.

After Tim’s police detective father dies in a car accident, Goodman heads to Ryme City to find out exactly what happened. That’s where he crosses paths with Tim’s partner Pikachu. Most Pokémon sound like they’re saying their name in a cutesy voice to humans. So the little yellow dude sounds like he’s saying variations on “Pikachu” to everyone in Ryme City—everyone except Tim. When Pikachu talks to him, Tim hears Ryan Reynolds, who does solid, entertaining voice work, especially in the first half of the movie before the plot and CGI even mess that up. Tim and Pikachu have to solve the mystery of what happened to Tim’s dad, which leads them into an investigation involving what is basically a Pokemon PED called ‘R’ and the involvement of a legendary Pokémon named Mewtoo.

The design of Ryme City is one of the strongest elements of “Pokémon Detective Pikachu.” With its massive skyscrapers with colorful billboards perched on all of them, it has echoes of “Blade Runner” if the replicants were all replaced by cuddly creatures. Some of the most fun to be had with “Detective Pikachu” is just admiring the eye-popping visuals when Tim first gets to Ryme City and seeing how the creators of the film have incorporated Pokémon mythology into a massive urban setting. Sadly, a lot of the visual pop of “Detective Pikachu” fades in the middle as it becomes more and more reliant on CGI sequences and expository-heavy flashbacks delivered through a hologram technology that may be the laziest screenwriting technique of the year—magic holograms that can show us and the characters everything that happened!

Here’s where someone might step in and say that I’m being overly critical of a film arguably stolen by a supporting Pokémon named Psyduck, whose anxiety has to be managed or he could explode (I could relate, dude). “Detective Pikachu” exists in that gray area where it wants to be taken just seriously enough to allow for questions about its themes and plot but also sometimes feels like it wants to just be fun for the little ones. Consequently, it's a bit too complicated for kids (my second grader was a little confused) and is too shallow for adults and teens to even remember it the next day. “Pokémon Detective Pikachu” is the kind of movie that uses things like loss and estrangement as manipulative plot devices. It’s an incredibly shallow screenplay, one that offers less thematic resonance than most of the Pokémon cartoons.

Of course, not everything can be Pixar in terms of screenwriting, but when the design is as strong as it is here, it’s disappointing to consider what little the writers do with this world. One of the most rewarding elements of watching a movie with your children is discussing the themes presented by the movie and how the film conveys them, but any conversation of “Detective Pikachu” gets back to visuals or characters from the Pokéverse that your little ones spotted on the fringe before long. The human characters and the actual plot simply never develop any weight or momentum, and the movie never recovers after a poorly-executed scene involving moving earth that is really just loud and annoying (and the CGI doesn’t look all that good either, especially in that scene).

“Pokémon Detective Pikachu” almost works as a foundation for a franchise. If it’s hit, and it likely will be, I’ll actually look forward to returning to this world. Now that the visuals have been defined and the rules have been clarified, maybe the writers next time will give their characters—both human and Pokémon—something more interesting to say and do. Now that they've "collected them all," what do they do with them? 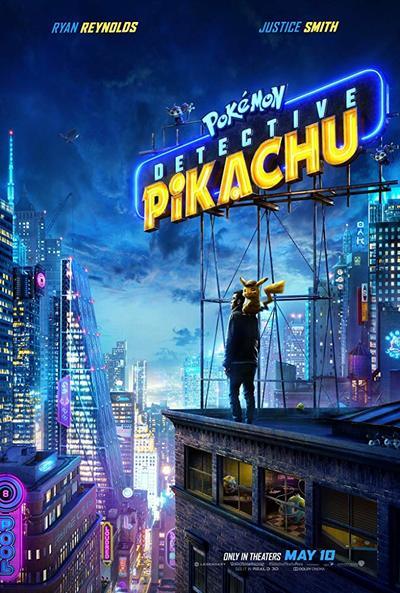 Rated PG for action/peril, some rude and suggestive humor, and thematic elements.