A movie "inspired" by a line of toys has one essential challenge—to be more than a feature-length commercial. Tops in that category are "The Lego Movie" and "The Lego Batman Movie," with "Trolls" following behind. "Playmobil: The Movie" comes much further down the list, just before "UglyDolls," which couldn't even get its message straight about how beauty is what's inside.

It's not a spoiler to say the message here is that we should all be open to adventure and play. But it drags along, the 110-minute running time seeming even longer than that. And it fails to justify itself as a film, with a lackluster storyline that does not try to keep consistent the rules of the world it creates. After a whole scene establishing the limited mobility of the Playmobil characters, they suddenly switch to being able to have human-like joints and range of motion. It does not even work as a commercial, never showing us why these toys could be especially fun to play with.

More troubling, this is a movie for young children that begins (in live-action) with a teenager and her six-year-old brother opening the door of their home to a pair of police officers, who have come to tell them that their parents have been killed in an accident. Stories about children need to get the parents out of the way somehow so the kids can have an adventure, but this is too intense and shocking for film's tone and likely to upset younger children.

It then jumps ahead four years, as the now-22-year-old Marla comes home exhausted, the burden of her responsibilities having taken all of the sense of fun and adventure out of her life. "It's like when Mom and Dad died, you died, too, and we're just pretending to be a family," her now-ten-year-old brother Charlie (Gabriel Bateman) tells her. So, she probably needs more than a magical trip to toyland to cheer her up, but that's all we're going to get.

Marla (Anya Taylor-Joy) discovers that Charlie has run away. She uses his cell phone's tracking device to find him at a not-yet-open toy fair with a massive display of Playmobil toys including a castle, pirate and Viking ships, and a Roman Coliseum-style amphitheater set up for gladiator battles. There is also a lighthouse with a magical ray of light that transports them into the world of the toys. Marla is a Playmobil version of herself, but Charlie transforms from a child into a burly Viking with a beard.

Charlie has been captured by the evil Emperor Maximus (Adam Lambert), who says he will give the people what they want—brutal trial by combat. Charlie joins a collection of warriors including an Amazon, a futuristic bounty hunter, and a pirate captain (Kenan Thompson) assembled by Maximus as gladiators.

Marla is determined to rescue him. And so, she has the adventure she dreamed of before her parents died, visiting all kinds of different lands (but is there really a Playmobil kit to build a seedy nightclub that's run by a worm-creature)? She meets an assortment of characters, with the stand-outs being the super-cool and elegant British spy Rex Dasher (voiced by Daniel Radcliffe), and a fairy godmother whose most important magical power is encouragement (voiced by Meghan Trainor). Most of her time is spent with Del (Jim Gaffigan), this movie's version of The Dude, an easygoing guy who wears Hawaiian shirts, sells "enchanted" pink bales of hay, makes a mean burrito, and is in debt to the worm-creature.

The settings, like the songs, and, let's face it, the toys, are bland and generic. "Playmobil: The Movie" might help pass the time on a snow day, but it is nowhere near as entertaining as whatever stories kids will make up for their toys themselves. 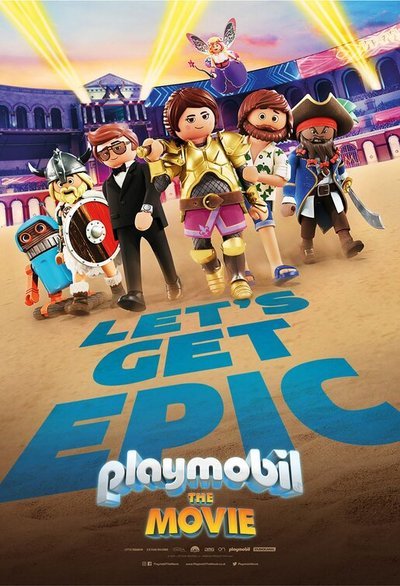