Bring it on, Bat dudes and dude-ettes. I am not among those flapping my Bat wings with overflowing joy over “The Lego Batman Movie,” the latest building block in a burgeoning animated toy-box franchise based on 2014’s “The Lego Movie.” Before you head to the comments section below to disagree, consider that this dissent comes courtesy of someone who bestowed four whopping stars upon its predecessor, a supremely original and consistently entertaining outing about resisting socially-enforced conformity.

It could simply be that I suffer from superhero fatigue these days. It’s a not-uncommon malady, one that seems to be also affecting even the stars of these repetitive enterprises as witnessed by current Bat surrogate Ben Affleck when he couldn’t summon the enthusiasm to also direct a sequel to last year’s critically maligned “Batman v Superman: Dawn of Justice.”

I also haven’t really been truly fond of a big-screen Caped Crusader since Michael Keaton’s inspired outside-the-box interpretation of the role. When he sneered, “I’m Batman,” it contained true menace. When Will Arnett throatily growls his lines in this Lego version, it is usually in the service of derisive mockery that only semi-regularly hits its mark.

Of course, if I wanted to spend a morning with a narcissistic grumpy billionaire who claims he and he alone can bring law and order to the world while bragging incessantly about his accomplishments, I could have simply skipped the screening and turned on any cable news channel instead. Although Batman scores points for often beat-boxing rather than tweeting his self-praise.

But besides an implacable me-first disposition, the synthetically molded superhero and a certain White House dweller also have a financial patron in common: Treasury secretary nominee Steve Mnuchin, who earns an executive producer credit on this spoofy spinoff. Hmm. Are you thinking what I am thinking about how they might just build that border wall—namely, one Lego brick at a time?

Granted, I will never be mistaken for a diehard Batman fan. I was more into Superman as a kid, mostly because of Lois Lane—but I was a loyal admirer of the campy ‘60s Batman TV series (referenced here via its “na-na-na-na” theme song, cheesy villains and the pop-art “POWs!” employed during a fight scene—a bone thrown at us oldsters). So, yes, I am not the target audience. Then again, neither are kids under eight or so, who likely aren’t going to get most of the non-bathroom-and-butt-related humor.

Basically, those who are batty for this stuff will positively devour all the Easter eggs that whisk by. But those who aren’t as up on the 78-year history of the character will likely feel as if their brains have been scrambled.

That’s not to say I didn’t find some pleasure in this aggressively frenzied comedic spin directed by Chris McKay (who worked as an animation co-director/supervisor on the first Lego film) on this most dour of comic-book heroes as it draws upon decades of Bat lore for its inside jokes (no previous incarnation of the Dark Knight is left un-zinged, including an obscure baddie known as the Condiment King) and cultural references that zip by faster than any souped-up Bat vehicle. But it soon becomes apparent that not everything is quite as awesome this time around. For one, there is barely a plot other than how the bromance-inclined Joker (Zach Galifianakis, who turns his leering clown into an incessant whiner) is ticked off that Batman refuses to acknowledge that he is his No. 1 arch-rival. Instead, Batman hurtfully claims that Superman is his greatest enemy before admitting, “I am fighting a few different people … I Iike to fight around.”

Action scenes consume most of the film's 104-minute running time, with a surplus of villainy summoned from not just the DC Comics universe but also home studio Warner Bros.’ warehouse of baddies—including the Eye of Sauron, Voldemort, King Kong, Gremlins, Godzilla and the Wicked Witch of the West and her Flying Monkeys. There is plenty of visual razzle-dazzle, to be sure, but not much else.

The sequence that I most enjoyed, however, was a rare quiet and semi-serious one when Batman returns to his near-empty secluded compound that occupies an entire island and reheats the lobster thermidor thoughtfully left in the fridge by manservant Alfred (a fine Ralph Fiennes). Dressed in a silk robe but still in his mask, Batman accidentally punches in 20 minutes instead of 2—glad to know I am not the only one who does this—and dines in solo silence before he heads to his Wayne Manor movie theater to giggle over the romantic interludes of such relationship flicks as “Jerry Maguire” and “Marley & Me.” Later, he gazes at photos of himself as a youngster alongside his parents, who—as Batman fans know—were tragically murdered. Bruce Wayne might be, as he declares, “the greatest orphan of all time,” but he also fears commitment to family, friends, even to fellow crime-fighters and foes.

That all changes when Barbara Gordon (Rosario Dawson, who eventually becomes Batgirl) replaces her father and takes over as commissioner. Instead of being a lone vigilante, she wants Batman to work alongside the city’s police as a team, the better to keep Gotham safe. In addition, while at a charity event for an orphanage, Bruce manages to unknowingly adopt googly-eyed foundling Dick Grayson (a nicely eager-beaverish Michael Cera), who eventually assumes his own super persona as sidekick Robin.

Certainly, the five writers who pieced together this pastiche of Batmania have done their homework. But the story peters out long before it concludes with—what else?—a dance number. I guess I should semi-applaud any movie that employs Mariah Carey to provide the voice for Gotham’s pearl-wearing and pant-suited mayor. But when it comes to humorous satire, it is the movie that has to sing even while it stings. 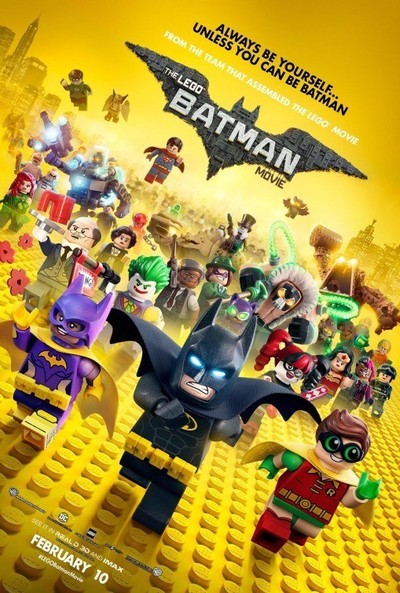 Rated PG for rude humor and some action.

Zach Galifianakis as The Joker (voice)