In 1917, in the Portuguese town of Fátima, three small children were visited by an apparition of the Virgin Mary. She urged them to pray, to dedicate themselves to the rosary, and in so doing they could bring about an end to the war then ravaging Europe. The children, Lúcia dos Santos and her cousins Francisco and Jacinta Marto, told their parents in descriptions vivid and specific: the vision was "brighter than the sun," a dazzling figure shedding "rays of light". As word got around, pilgrims flocked to Fátima. (Fátima is still a regular pilgrimage destination.) The two younger children died in the flu epidemic of 1918, but Lucia lived to the age of 97, dying in 2005. She became a nun and published multiple memoirs, the main one being Memórias da Irmã Lúcia. Marco Pontecorvo’s "Fátima" tells the story of these children and the upheaval in their lives—and their family's lives—due to the children's refusal to retract their story, even when put under enormous pressure from civil and religious authorities. "Fatima" is told simply but emotionally, prioritizing the sensorial reality of the children's world and the people inhabiting it. This devotion to the "real" makes the holy vision palpable and plausible.

Marco Pontecorvo is the son of the legendary Gillo Pontecorvo ("Battle of Algiers"). He has worked mostly in television, and "Fatima" is his third feature. For "Fatima," he and his co-screenwriters Valerio D'Annunzio and Barbara Nicolosi, use a framing device: in 1989, an author and professional skeptic (Harvey Keitel) visits the aging Sister Lúcia (Sônia Braga) in her Carmelite convent in Coimbra to interview her about her experiences. Over the course of the film, Keitel's character raises questions, interrogates her testimony, and Sister Lúcia answers forthrightly, sometimes teasing him with little quips, a twinkle in her eye. (People who went to visit Lúcia over the years mention her sharp sense of humor.) These conversations provide space for the philosophical and theological questions the story presents. Keitel's manner with Sister Lúcia is respectful and both allow the other to have their say. "Not everything unexplainable is necessarily transcendent," Keitel says. Sister Lúcia responds, "Faith begins at the edge of understanding." While there is a gap between the characters that will probably never be bridged, their conversation is invigorating, a healthy debate that avoids polarizing hostility.

The main action takes place in 1917, where Lúcia (the remarkable Stephanie Gil), and her cousins (Jorge Lamelas and Alejandra Howard) wait in the dusty fields for their apparition (Joana Ribeiro) to return to them. When she appears, she does so softly, walking in bare feet, wearing a white dress and veil. Her message is urgent: the war must end. Lúcia's brother Manuel has been declared missing in action and Lúcia's mother Maria (Lucia Moniz), an intense mercurial and sometimes harsh woman, is fearful she hasn't prayed hard enough for her son's return. Maria is convinced Lúcia is lying. Why would the Virgin appear to a child, and not a very good child at that? The Mayor (Goran Visnjic), a secular man, is alarmed by the pilgrims flocking to Fatima, and goes so far as to padlock the church. He also pulls the children in for rounds of interrogation. The Catholic Church hierarchy gets involved, with the local priest (Joaquin de Almeida) calling in the big guns. The children remain steadfast. “She was as real as you are,” Lúcia tells her outraged mother.

One of the things that distinguishes "Fatima" from similar films is its careful attention to character development. Everyone gets to be complex: the children, their parents, the priest. Even the Mayor has a complicated relationship with his wife, his wife who loves her husband but believes the children. The Mayor could have been portrayed as a sneering villain. You can see the enormous pressure he's under. Lucia's mother could also have been portrayed as a villain. She's not. She's torn in a million different directions.

Miracles are tough to portray on film. You run the risk of being hokey, or turning a spiritual experience into little more than a CGI effect. Pontecorvo and his cinematographer Vincenzo Carpineta avoid this by turning their lens onto the natural world. The focus on the tall grasses moving with the wind, the rustling of the leaves, makes nature seem like an emanation of a larger entity trying to communicate. Terrence Malick is a master at this, evoking the experience of faith through constant shots up into the air, seeking the light, with fragmented voiceovers coming like whispered prayers. Pontecorvo doesn't push it as far as Malick pushes it, but he does create a sense of the physical world not being just physical. There's a beautiful moment where Lúcia suddenly sees the treetops above her head wavering, as though they are not trees at all, but reflections of trees in the water. Reality is not real, there's something beyond.

As I was thinking about this problem of portraying miracles on film, Henry Ossawa Tanner's stunning 1898 painting "The Annunciation" came to mind. When I lived in Philadelphia, I'd go "visit" it every time I went to the Museum of Art. Done mostly in shades of red and yellow, "The Annunciation" shows a dark-haired Mary, sitting on a bed and staring across the room at a blazing column of flame. It almost looks like a bright slash in the fabric of time. In so many paintings of the Annunciation, the angel appears with wings, halo, the expected accessories. Tanner, though, captures something else, the experience of the transcendent.

Pontecorvo, in his simple and patient way, by focusing on the earthiness of the surrounding world, as well as the three-dimensionality of the human beings in that world, accomplishes the same thing. There's one sequence when the children are given a vision of the pits of hell, and this doesn't work nearly as well as the rest of it. It's very literal, with screams and fireballs and smoky blackened sky. Compared to the rest of the film, it screams special effects lab, and doesn't have half the power of a woman in a white veil walking across a field.

The story of "Our Lady of Fatima" has been told many times before, the most well-known being Warner Brothers' 1952 version "The Miracle of Our Lady of Fatima." Faith-based films are nothing new, and the tradition continues with films like "The Passion of the Christ," the works of Malick, and Martin Scorsese's "Silence" (to name a few). "Fatima" takes belief seriously, but it takes humanity seriously too. 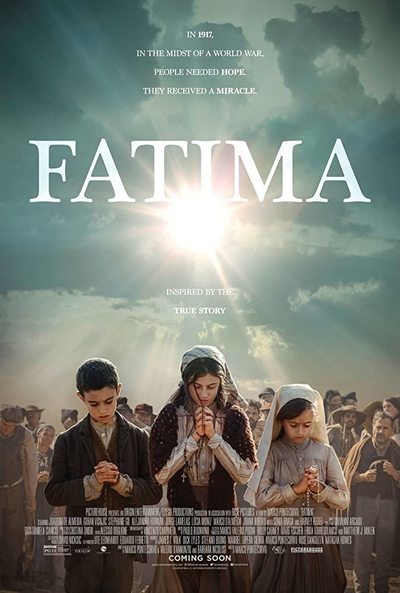 Rated PG-13 for some strong violence and disturbing images.