My Journey Through French Cinema

Bertrand Tavernier’s “My Through Journey Through French Cinema,” like the two Martin Scorsese first-person docs that obviously inspired it, “Personal Journey Through American Cinema” and “My Voyage to Italian Cinema,” isn’t about the filmmaker’s own career but about the cinephilia that preceded and influenced it. As such, the three-hour memoir/meditation’s natural home would be the French equivalent of PBS.

In foreign contexts, the film is somewhat more anomalous. Had Tavernier been crafting it for American art houses, he would have been well-advised to shape a two-hour version. He might have also have been wise to start out with the part of French cinema that still excites foreign viewers most, the era of the New Wave. That brilliant artistic moment does finally make an appearance, in hour three, but it’s after two hours spent exploring the years 1930-60, which will be far less familiar to non-French viewers.

In a way, it’s the cinematic equivalent of François Truffaut’s intoxicating book The Films in My Life, though that comparison may not be entirely to the benefit of Tavernier’s work. Imagining the same work executed by Truffaut, it’s easy to envision a consummately witty, charming and illuminating film, one that would sweep the viewer along on a tide of cinematic rapture and insight. The Tavernier version, by contrast, is sober, sincere and professorial rather than deeply exciting or revelatory.

World War II is the devastating event that looms over Tavernier’s entire chronicle, reaching from out from the ‘40s well into the ‘60s. Starting out in memoir mode, the filmmaker recalls being a three-year-old in Lyon when Liberation came, announced by lights that he would forever after associate with splendors of cinema.

His earliest memory of movies is of the flashing lights of a car and motorcycle as they sped along a mountain road in a gangster film. Recalling the scene years later, Tavernier realized the movie was by Jacques Becker, a favorite director who dominates the first hour of “My Journey Through French Cinema.” Calling him “the most American” of French directors—a compliment that wouldn’t be regarded as such in other eras—Tavernier praises Becker for his eye-level viewpoint, his distrust of plot and empathy for his characters, especially the central place he gave women.

Using clips from Becker’s best known films, “Casque d’Or,” “Le Trou” and “Touchez Pas au Grisbi” (which he salutes because it wasn’t like American gangster films), Tavernier provides an insightful tribute to the visual eloquence and originality of his first artistic hero, whose death at 53 in 1960 was a great loss to French cinema.

The next artistic heavyweight considered is Jean Renoir, but there’s a catch. While Tavernier recalls the “shock” of encountering the brilliance of “The Grand Illusion,” and recognizes both its dazzling stylistic expressiveness and political daring (it was banned by the Nazis), he ultimately deems Renoir politically undesirable. Though the elder director was a man of the left, as his Popular Front-oriented films of the ‘30s attest, he evidently was not leftist enough for Tavernier, a one-time Communist.

While this reviewer doesn’t have the expertise to evaluate such charges, Tavernier passes along the inflammatory accusation that Renoir moved to America in 1940 to convince the U.S. that the Petain government was good for France, and the view that it was disgraceful for the son of Pierre Auguste Renoir to become a naturalized American citizen.

However cranky and tinged with ancient political hostilities, the film’s reflections on Renoir lead naturally into a consideration of the great French screen star Jean Gabin. In the 1930s, Tavernier aptly notes, the young and brawny Gabin was the ideal “working class hero”: a veritable poster boy for the Popular Front. Though, like Renoir, he decamped to Hollywood during World War II, he bought his contract back from Universal in order to return and fight. Returning to the screen thereafter, Gabin had lost the youthful dash that we still associate with his iconic image, but Tavernier makes a good case for the richness and skill of his post-WWII work.

Turning to the work of Marcel Carné, still a divisive figure in the world of French cinema, Tavernier delivers one of most detailed disquisitions on technique and style, noting for instance that Carné almost always used a 32mm lens. Illustrating his comments with entrancing passages from films like “Port of Shadows” and “Le Jour Se Lève,” he says, “Every shot energizes the narrative. No two are alike.” All the same, Tavernier says the visually gifted director couldn’t write a line and he credits the spirit of generosity in his films to screenwriter Jacques Prévert.

Following a tribute to the importance of music in films and the work of composers Maurice Jaubert and Joseph Kosma, Tavernier allows us a peak into the cinematic revolution of the 1960s via his work as a press agent for producer Georges de Beauregard, who launched the New Wave with “Breathless.” While giving us portraits of cineastes including Agnès Varda and Claude Chabrol, Tavernier recalls working as a publicist on “Contempt” and other films by Jean-Luc Godard, an inveterate iconoclast who said he didn’t want to meet critics who’d praised his work, only those who’d panned it.

Prior to working with de Beauregard, Tavernier found his way into the world of filmmaking as an assistant to director Jean-Pierre Melville, who joins Becker as the twin titans in his personal pantheon. The section on Melville, a difficult character as well as a great inspiration, is easily the most engaging part of this film’s second half. The glimpses that Tavernier provides of such icy crime dramas as “Le Doulos” (supposedly Quentin Tarantino’s favorite movie), “Le Samouraï” and “Le Cercle Rouge” left this viewer eager to return to Melville’s work. That’s perhaps the best reaction a work of earnest cinephilia like “My Journey Through French Cinema” can provoke. 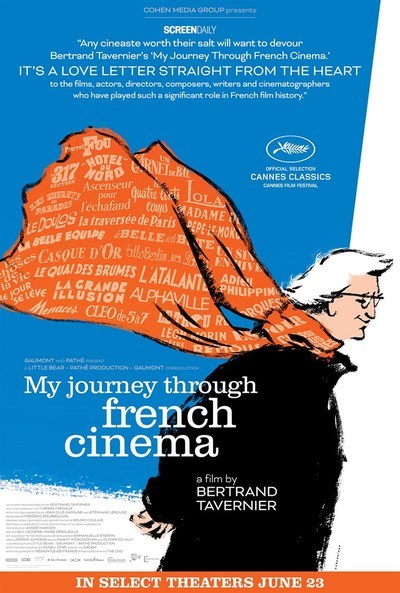 My Journey Through French Cinema (2017)