Growing older is a balancing act between skills that have never been better, and abilities that sometimes betray. At 50, Max the Liar has never possessed more wisdom about his profession of burglary. But he no longer cares to make the effort, and his dream is to salt away 96 kilos in gold bars that have been stolen at Orly Airport. Then he will retire. Max is a solid, well-groomed, impeccably dressed, flawlessly polite man whose code is so deeply embedded that he never refers to it, even indirectly. During the course of three days, he uses all of his wisdom and experience to make his dream come true, and it is almost enough.

Max is played by Jean Gabin, named "the actor of the century" in a French poll, in Jacques Becker's "Touchez Pas au Grisbi," a 1954 French crime film that uncannily points the way toward Jean-Pierre Melville's great "Bob Le Flambeur" the following year. The two films follow similar story arcs and have similar heroes: middle-age men, well-liked, able to figure the odds, familiar in their haunts of clubs and restaurants, vulnerable only because of the passions of their hotheaded pals. Gabin plays a man of few words, who displays warmth that is real but understated; a man who is always thinking a step ahead, using brainwork instead of footwork or gunplay to survive in the underworld.

His weakness is his friendship for Riton (Rene Dary), a sidekick who he calls "Porcupine Head," and who he has essentially carried for years. Does Max love Riton? Max seems to be the current or former lover of almost every woman in the movie, and yet, yes, Riton is who he loves. There's a lovely scene where Max outsmarts rival hoods who are trying to tail him, and takes Riton with him to a safe house -- an apartment Riton never knew existed.

There he pours them a bottle of wine, makes a midnight meal of pate and biscuits, and takes fresh pajamas, blankets and toothbrushes out of a cabinet and hands them to his friend. Although Gabin's face reveals nothing, we sense that Max enjoys this domestic interlude more than anything else that happens in the movie; certainly he is bored in nightclubs and tired of crime, and although he visits his elegant mistress Betty (Marilyn Buferd) for conjugal observances, this involves more ritual than desire.

Max, like Bob and many other French gangsters, lives in Montmartre, a district seen with particular detail in the film. "I believe above all in Paris," Becker said, and his film shows an instinctive familiarity with the way the city works. The film opens and closes with Max dining in the same restaurant, and notice how quietly the point is made that ordinary civilians are not welcome, no matter how many tables are empty, when Madame Bouche's favorite gangsters are in the house. Max pays off a young friend's tab at the end of the evening, and in a later visit, gives Madame some money to hold for him; the restaurant is also his bank and club.

They all leave, that first night, to escort two showgirls to the strip club where they work; they are Lola (Dora Doll) and Josy (Jeanne Moreau at 25), who Riton regards as his mistress. At the club, we meet the drug dealer Angelo (Lino Ventura) and the club owner Pierrot (Paul Frankeur), a k a "Fats." Max and Angelo seem to be on good terms, but a little later Max opens the door of a dressing room and sees Josy being embraced by Angelo.

This would come as particularly bad news to Riton, who fancies himself a ladies' man and thinks Josy belongs to him, but look how elegantly Becker resolves the situation. Instead of telling his pal that he's a cuckold, Max advises Riton to give up Josy. He points out aging playboys steering hookers around the dance floor, calls attention to the bags under Riton's eyes and suggests they go home early. Riton suggests he stay for one more drink. No, says Max, with that flat, calm Gabin delivery; he knows what one more drink will lead to: A bottle of champagne with Angelo, and then having to take the girls out for onion soup, and then having to have sex ... it's easier just to leave now.

The plot resolves itself as a race between Max's attempts to fence the gold bars through his Uncle Oscar (another cadaverous relic with a young mistress), and Angelo's attempts to kidnap Riton and find out where the loot is hidden. Max senses something fishy is going on and warns Riton; that leads to their midnight dinner. And as the two old friends turn out the lights, we realize this opening sequence has occupied some 40 minutes with flawless storytelling that has consisted almost entirely of small talk in the restaurant and the club, and then a subdued chase as Max is tailed to his home.

What happens the next day, I will leave for you to discover, describing only an extraordinary scene where Max learns Riton has been nabbed. Max knows this means the gold bars will be required as ransom. But he's less concerned about the gold than about his pal, and he has a wonderful soliloquy, an interior monologue, which we hear in voice-over, as Max paces his apartment. He talks about what a dope Riton is, and what a burden he has been for 20 years: "There's not a tooth in his head that hasn't cost me a bundle." We understand that Max, who is competent above all things, almost values Riton's inability to live without his help. At the end of his soliloquy, instead of growing angry as a conventional gangster might, Max opens a bottle of champagne, plays a forlorn harmonica solo on his jukebox, sits in a comfortable chair and lights a cigarette. He treasures his creature comforts, especially when he might be about to lose them.

Jacques Becker (1906-1960) was not the flashiest of French filmmakers; he had a way of dealing directly with his material. In this film there are no fancy shots. Almost everything is seen at eye level, point of view is respected, and the style shrinks from calling attention to itself. Becker's directness and simplicity inspired the affection of younger directors like Francois Truffaut. "He invented his own tempo," Truffaut wrote after he died. "He loved fast cars and long meals; he shot two-hour films on subjects that really needed only 15 minutes. ... He was scrupulous and reflective and infinitely delicate. He loved to make detailed films about ordinary things..."

And in his review of "Touchez Pas au Grisbi" ("Don't Touch the Loot"), Truffaut noticed: "He keeps only what is essential in the dialogue, even theessentialpart of thesuperfluous." Surely the monologue about Riton's teeth is an example of that; we hear it, but we never see the heist at Orly, nor does Max ever talk about it. "The real subjects of 'Grisbi'," Truffaut concludes, "are aging and friendship."

Consider the scene where Riton looks at the bags under his eyes in the mirror, to see if they are as bad as Max said. Remember Max saying he doesn't want to go to the nightclub because he fears he will get drowsy. And when he goes to the club to enlist Fats in a probably dangerous mission, the club owner's wife asks Max to take care of her husband, observing: "At my age, there's no second chance."

Gabin himself was almost 50 when he made the film. There's not a trace of vanity in his performance. Having played the escaped prisoner in Renoir's "Grand Illusion" and the dashing criminal in "Pepe Le Moko," he grew up to play grown-ups. Becker probably met Gabin on one of Renoir's sets; he was the assistant to the great filmmaker in the 1930s, on "Grand Illusion," "Rules of the Game" and many other films. His own work includes two titles often ranked with "Touchez Pas au Grisbi" -- "Le Trou" (1960), about prisoners laboriously trying to escape, and "Casque d'Or" (1952), with a star-making role for Simone Signoret in a story of love and betrayal during the 1890s.

The world of French crime films is a particular place, informed by the French love for Hollywood film noir, a genre they identified and named. But the great French noirs of the 1950s are not copies of Hollywood; instead, they have a particularly French flavor; in "Touchez Pas au Grisbi," the critic Terence Rafferty writes, "real men eat pate," and this is "among the very few French movies about the criminal class in which neither the characters nor the filmmakers are afflicted by the delusion that they are Americans." A few years later, in Godard's "Breathless" (1960), Belmondo would be deliberately channeling Bogart, but here Gabin is channeling only himself. He is the original, so there is no need to look for inspiration.

"Touchez Pas au Grisbi" opens Friday with a newly restored and subtitled print at the Music Box, and is in limited release around the country. Related reviews at Roger Ebert's Great Movies site(www.suntimes.com/ebert)include "Bob Le Flambeur," "Breathless" and "Grand Illusion." 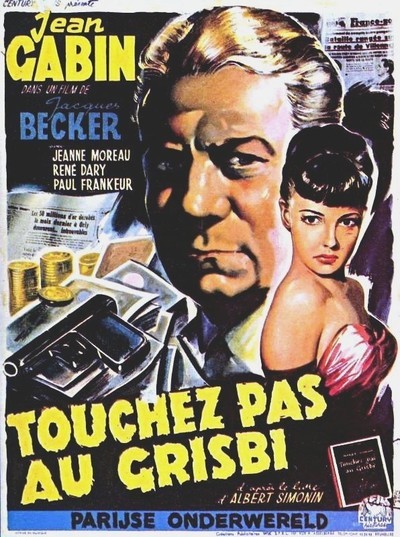