For the young heroes and heroines in the tenderly magical fables by Irish animation studio Cartoon Saloon, their large-than-life journeys take them inward. In tandem with the wondrous handcraft on display, it’s the honest richness of their characters’ predicaments that distinguishes the studio's features from most Western family-friendly fare.

Cartoon Saloon's latest soul-soothing and modestly enchanting gift to the world, “My Father’s Dragon,” from director Nora Twomey and screenwriter Meg LeFauve (“Inside Out”), graciously revives the 1948 children’s novel of the same name by Ruth Stiles Gannett. The tale centers on a courageous kid and a juvenile dragon on an adventure laden with lessons in emotional intelligence presented via imaginative scenarios.

More suited for a younger audience than Twomey’s excellent and Oscar-nominated directorial debut “The Breadwinner,” about an 11-year-old girl in Afghanistan during the Taliban rule, “My Father’s Dragon” wrestles with how fear paralyzes or propels us. A whimsical creature terrified of their home disappearing; a parent losing their temper in the face of uncertainty; a child feeling momentarily powerless—everyone experiences fear with similar acuteness. But it’s in how they choose to react that fear can become a vehicle for growth.

Leaving behind their once successful store in a tight-knit community, a kindhearted boy named Elmer (Jacob Tremblay) and his caring mother Dela (Golshifteh Farahani) move to a dense urban locale known as Nevergreen. In the unfamiliar environment, Elmer believes Dela’s promise that they’ll soon own another establishment. Their everyday lives will resume their course. Yet as the pressures of life mount around her, that goal seems rather distant.

As a reward for his kindness amid the domestic turmoil, a talking cat guides Elmer to the colorful Wild Island to free the still-not-fully-developed dragon Boris (Gaten Matarazzo) from Saiwa (Ian McShane), the leader of all the fauna who uses him to prevent their floating home from sinking. Designed for maximum cuteness, the animals here look and behave with the charm natural to fairytales: a pack of smiling tigers has heads larger than their bodies, and there's also an anxiety-ridden lemur, a mother rhino and her offspring, and some cotton-like pikas.

Liberated from his forced duties, Boris explains he wishes to become an “after-dragon,” an evolved version of himself with the ability to spit fire. He needs the boy’s help to decipher how to reach his full potential. In exchange, Elmer wants his new fantastical mate to come back with him to Nevergreen for a few days to attract attention for him and his mother’s potential new business. The fluffy islanders, however, need them both to save Wild Island.

The vegetation in this realm often appears in red and pink tones, like a conscious decision taken to contrast the beautifully textured backgrounds and Boris’ yellow and green striped skin. Boris' skin is the most directly faithful visual element from the original illustrations published more than 70 years ago.

Acclaimed for their works based on Irish folktales, most recently “Wolfwalkers,” Carton Saloon continues to demonstrate that 2D is not only a viable technique in animation but one fertile for innovation. In “My Father’s Dragon,” some of the more abstract sequences employ an elemental aesthetic with figures drawn as silhouettes moving fluidly across the frame to depict fear non-verbally. Elsewhere there are signature characteristics, such as Elmer’s large eyes. The curved lines of his physiology are reminiscent of some of the company’s other protagonists—such as the brave Parvana in “The Breadwinner.”

Boris’ playful personality complements Elmer’s “man with a plan” mentality as they encounter obstacles that strengthen their friendship. Boris and Elmer walk together in a relationship of equals that eventually creates a charged and tearful confrontation portrayed with utter vulnerability. The complications challenge both Boris and Elmer’s resilience and make it clear that in sharing the weight of what scares them they can defeat it. As in several of Disney’s recent releases, there’s no material villain, but innermost insecurity or shortcoming to address.

Just like how his mother lied to him to protect him from sorrow after the move, Elmer in turn must conceal some truths to allow others to maintain hope. LeFauve’s take on that essential understanding of the moral ambiguity sometimes needed to move forward is both intellectually accessible for the target demographic and recognizable to older viewers. Devoid of wordy explanations, Twomey’s sophomore effort states that an individual’s actions, especially those that parents carry out for the sake of their children, can’t always be simplistically classified as fully honorable or negative. Love lies in the in-between.

Though “My Father’s Dragon” doesn’t imitate the grand narrative stakes and dazzling imagery of its predecessors at the studio, it’s still disarming in its earnestness. Even if a wonder feels minor, it reminds us that everything that Cartoon Saloon invests its talents in results in open-hearted, warm, and affecting art that’s never saccharine but thematically matured in essential drops of wisdom. With "My Father's Dragon," we are meant to think of the unknown not as the land of doubt but as the territory of possibility, and of the answers, we lack as the opportunity to create the ones we most desire. 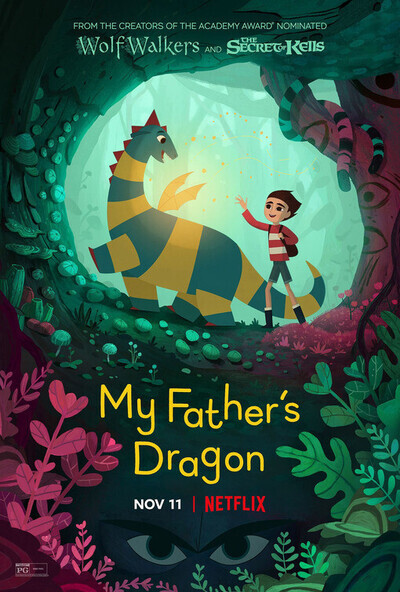 Rated PG for some peril.