Based on the popular young adult novel by Deborah Ellis,“The Breadwinner” is an ambitious but occasionally uneven animated film that tells the story of Parvana (voiced by Saara Chaudry), an eleven-year-old girl living in Kabul with her family under Taliban rule. While women are forbidden to leave their house to go to the marketplace, Parvana is allowed there as long as she is accompanied by her beloved father (Ali Badshah), a one-legged former teacher. The heroine's father tries to instill the importance of telling stories, both as a way to distract from the horrors of the outside world and to potentially serve as an agent of change. While at home one night, a group of Taliban soldiers, led by an especially angry former student who barely seems to be past school age himself, barge in and take her father away to prison. This leaves Parvana and the rest of her family—a sickly mother, an older sister and a baby brother—to fend for themselves despite having no legal way to do something as simple as purchasing food so that they don’t starve. (Even a simple trip to a nearby well for water, as we see, is fraught with danger.)

When an attempt by Parvana and her mother to go to the prison in the hopes of seeing her father ends with her mother being beaten, the girl decides to take matters into her own hands. In order to help distract her brother from what is going on, she concocts an extended fable about a young boy on a quest to stand up to the evil Elephant King that has terrorized his village and stolen the seeds that it needs for next year’s crops. For more practical matters of survival, she takes inspiration from Shauzia (Soma Chhaya), a former classmate who has cut her hair in order to pass as a boy, and decides to adopt a similar disguise. Now she is able to provide for the others by taking odd jobs for money and shopping in the marketplace from unsuspecting vendors. As the two girls experience this unusual degree of freedom, they even begin to idly think about getting out of Kabul altogether and starting a new life. Inevitably, reality intrudes and forced Parvana and her family to make a number of awful choices in order to survive even as the war outside comes closer and closer to their home.

It is ironic that “The Breadwinner” would put such an emphasis on the importance of storytelling, since it is on a narrative level where it is clunkiest. Although we are always behind the brave and resourceful Parvana, there never seems to be a clear idea of what she is hoping to ultimately accomplish. Her initial desire to help free her father wanes with her adventures as the “man” of the house, until the story needs a new hit of dramatic urgency. A subplot involving a distant relative who might be able to help in exchange for his son marrying Parvana’s older sister is awkwardly established and unsatisfactorily resolved. The Elephant King story, which is related in chunks throughout the film, too often disrupts the flow of the main story, and its ultimate purpose—to help explain the whereabouts of Parvana’s missing older brother—feels surprisingly arbitrary for what should be an emotionally powerful moment.

And yet, while “The Breadwinner” may suffer when it comes to the details, it does have a certain undeniable power in its broad strokes. Although the story may sound far too dark for younger viewers, I suspect that more thoughtful children may find it an engrossing story of a young heroine facing adversity using nothing more than her bravery and ingenuity. Director Nora Twomey, who previously worked on such celebrated animated films as “The Secret of Kells” and “Song of the Sea,” puts the material across in a way that allows kids to understand many of the complicated issues on display without dumbing things down. Visually, the film is impressive throughout with a nice contrast between Parvana’s story, utilizing an approach designed to suggest traditional hand-drawn animation, and the Elephant King tale, which is presented in a more overtly stylized manner meant to emulate a paper character-based version of stop-motion.

“The Breadwinner” doesn’t always work, and there are times when I wished that the story had been fleshed out a little more. However, it is always lovely to look at, and Parvana makes for such a sympathetic and compelling heroine that viewers both young and old will want to follow her as she tries to negotiate her way through a number of seemingly impossible situations. 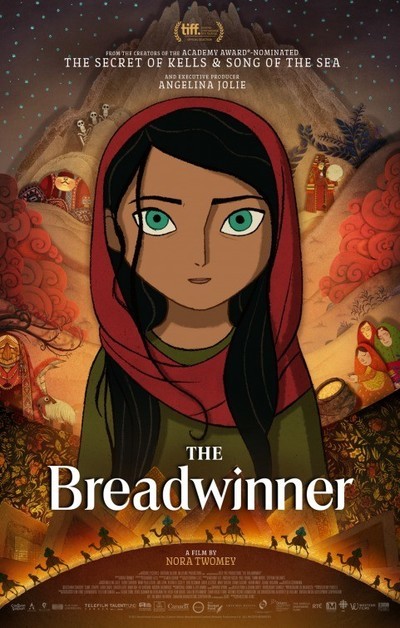 Rated PG-13 for thematic material including some violent images.