Cartoon Saloon, the studio behind “The Secret of Kells,” “Song of the Sea,” and “The Breadwinner,” returns this year with what could be their best film, a rousing, lyrical, gorgeous adventure called “Wolfwalkers.” This beautiful piece of work has echoes of other art from classic fairy tales to Studio Ghibli films about man’s relation to nature like “Princess Mononoke,” but it also develops its own robust, powerful voice. Textured in ways that family entertainment is rarely allowed to be and even more visually ambitious that the other Cartoon Saloon films, this is a special movie.

Set in 1650, “Wolfwalkers” takes place against the backdrop of the English colonization of Ireland. Oliver Cromwell sends a hunter named Bill Goodfellowe (Sean Bean) to a remote outpost that has seen wolf attacks as the city grows into the woods around it. Bill’s duty is to hunt and kill the wolves, but his daughter Robyn (Honor Kneafsey) aches to join him on his daily duties, frustrated by being left behind in a city that doesn’t really want her father or her there. It’s essential to remember that Robyn is an outsider too, her father forced into duty in a way that makes her a target of ridicule by local kids.

Robyn sneaks away and follows her father into the woods, discovering that the legends spoken of in town of a wolfwalker is true. She meets Mebh (Eva Whittaker), a girl who has a wolf form that is independent of her while the human Mebh sleeps. She also has healing powers and control over the vicious wolfpack that has been tormenting people. Mebh is waiting for her mother to return from her wolf form, hoping that she will then lead the pack to a safer place.

“Wolfwalkers” unfolds almost entirely through hand-drawn animation that more often echoes watercolor art that has come to life than what modern audiences expect from cartoons. It has a mesmerizing beauty with so much refined attention to detail. The colors splash across the screen and the line detail sometimes feels like it’s purposefully calling attention to the fact that somebody drew this. Animation sometimes feels like it’s seeking perfection in terms of CGI and detail but what I love about the look of “Wolfwalkers” was how much it reminded me that human artists created it. You can feel the passion of the art in every frame, some of which are striking enough to hang on a wall. Visually, it’s one of my favorite animated films in a very long time, and it reminded of other times I was struck by the beauty of a piece of animated work like “Spirited Away” or “The Tale of the Princes Kaguya.”

With this beautiful visual language, Tomm Moore and Ross Stewart complete what has been called their “Irish Folklore Trilogy” with a story that’s thick with adventure and tension. This is not a cautious, reserved fairy tale like what people typically expect from that genre. It’s really an action movie as Robyn and Mebh seek to save a way of life and keep their people safe. And, of course, there’s layers of subtext underneath about empowerment, colonialism, and man’s relationship with mother nature. It’s the kind of film you can appreciate with your children in a way that sparks conversation afterward about the themes and the artistry. There’s so much going on in every frame.

If there’s a flaw in “Wolfwalkers,” it’s length. I feel like there’s a masterpiece of a 95-minute movie buried in this 105-minute one. Some of the scenes go on just a tad too long and some ideas are repeated one time too many. While the movie doesn’t feel that long because of the joy of just experiencing it, I feel like it could have been slightly tightened up and maybe been an instant classic.

Clearly, this is a minor complaint and I feel like any issues I had with “Wolfwalkers” could fade away with a second and third viewing. And more than most films I’ve seen in 2020, it’s a movie that I know I will watch again. I return to the Studio Ghibli films at different points in my life and get different things from the best of them. I feel like “Wolfwalkers” will have a similar staying power, playing with a different energy in childhood, adulthood, and old age. Great art has the ability to do that.

This review was published on September 14, 2020 with the premiere at the Toronto International Film Festival. The movie is opening theatrically on November 13, 2020 and will be available on Apple TV next month. 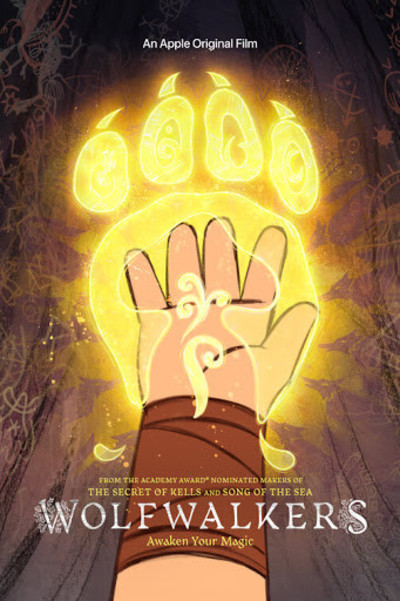