There's lousy, there's excremental
and then there's ... this motion picture

Since 1999 I've been carrying a blue pill in my pocket, holding onto it for the moment when I'd truly need it. The pill, I was told, would instantly erase the memory of any movie — but just the one movie, just the one time.

I was tempted to take that pill after "Freddy Got Fingered." I had the pill in hand as I walked out of every other Adam Sandler movie of the last decade.

But I hung on to it, knowing something even worse was going to come my way one day.

Midway through "Movie 43," I knew the day had come. As the credits rolled with the inevitable blooper scenes of actors breaking character and inexplicably laughing when nothing funny is going on, I swallowed that pill, hoping to erase instantly all mental images of what had just transpired.

As the ads for "Movie 43" promised (threatened?), you can't un-see this thing, so please: Stay away. Even if you might think that sitting through "Movie 43" would be an adventure along the lines of experiencing "Showgirls" or "Howard the Duck," you'll be filled with regret five minutes into this atrocity. There's camp-fun bad and interestingly horrible bad, and then there's just awful.

We've been hearing about this movie for some four years, as producer Peter Farrelly somehow coaxed more than a dozen A-list stars and talented character actors into appearing in a series of aggressively tasteless scenes loosely strung together as proposed elements of a movie that Dennis Quaid is pitching to Greg Kinnear. So whenever a Gerard Butler or a Johnny Knoxville or a Jason Sudeikis or an Uma Thurman became available and/or were blackmailed, Farrelly would bring in a director, and they'd shoot a scene. Unfortunately, the shooting was never fatal.

At least Quaid's character in the movie is insane. The motivations for everyone else go unstated and unexplained.

Farrelly was going for a 21st century version of "The Groove Tube" and "Kentucky Fried Movie," two very funny, very raunchy and very influential sketch-comedy flicks of the mid-1970s.

The only thing "Movie 43" has in common with those movies is it's in color.

Warning! Descriptions of astonishingly unfunny scenes of grotesquerie, scatology and female humiliation are directly ahead.

One assumes Richard Gere knew what he was getting into when he agreed to play an exec for a company selling the iBabe, a music player that looks and feels exactly like a naked woman — with a dangerous exhaust fan in her lower extremities. And when teenage boys start playing with the iBabe in a certain way, guess what happens?

And it seems "Parks and Recreation" star Chris Pratt and real-life spouse Anna Faris were only too happy to play a couple who plan to consummate their love by having him consume mass quantities of Mexican food before defecating on her.

Another real-life couple, Naomi Watts and Liev Schreiber, plays parents who home-school their teenage son to the extreme, with Mom seducing the son and Dad hazing him in unspeakably cruel ways.

Apparently Emma Stone believed in a script that has her playing a trampy, foul-mouthed scamp who exchanges insults and cringe-inducing sex talk with an ex-boyfriend in a grocery store as their exchange is picked up by the PA system.

Stay with me, please. I had to sit through it. You're just reading about my pain.

Academy Award winner Halle Berry no longer can cite "Catwoman" as the low point of her career. In "Movie 43," she initiates a game of "Truth or Dare" on a blind date — and that leads to Berry making guacamole by mashing avocados with her bare breasts, and inserting a turkey baster filled with extra-hot sauce into herself. And then things get REALLY ugly. My God, do they get ugly.

Apparently Hugh Jackman and Academy Award winner Kate Winslet thought they'd be showing off their carefree, comedic sides by playing a blind date scene in which Jackman's character has a realistic-looking scrotum dangling from his chin — which seems to escape the notice of everyone but Winslet.

They were all wrong. Very, very, very wrong.

From "National Lampoon's Animal House" to "Stripes" to many of the Judd Apatow R-rated comedies to "Ted," I've long been a fan of rude-crude-lewd films — IF they're also smart and we care about the characters and there's a lit bit of an emotional investment in their fates. But I don't see a redeeming molecule in a movie that has Chloe Grace Moretz getting her first period while teenage boys and grown men react like Neanderthals, or Kristen Bell playing Supergirl, who becomes the butt of jokes about her crotch, not to mention the humiliation endured by Faris, Berry and Watts. The men in this movie are jerks, idiots, dolts and fools. The women have it much worse.

At least Elizabeth Banks doesn't appear until after the closing credits. By then, a good percentage of any audience that somehow stumbled into this movie should be long gone. 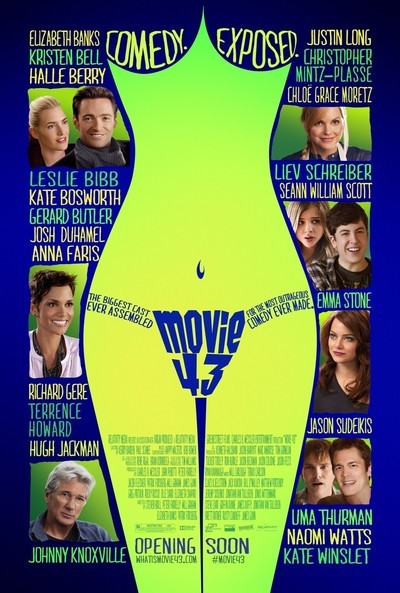 Rated R for strong pervasive crude and sexual content including dialogue, graphic nudity, language, some violence and drug use