“Stripes” is an anarchic slob movie, a celebration of all that is irreverent, reckless, foolhardy, undisciplined, and occasionally scatological. It's a lot of fun. It comes from some of the same people involved in “National Lampoon’s Animal House,” and could have been titled National Lampoon's Animal Army with little loss of accuracy. As a comedy about a couple of misfits who find themselves in the U.S. Army's basic training program, it obviously resembles Goldie Hawn's “Private Benjamin.” But it doesn't duplicate that wonderful movie; they could play on the same double feature. “Stripes” has the added advantage of being a whole movie about the Army, rather than half a movie (“Private Benjamin” got sidetracked with Hawn's love affair).

The movie is not only a triumph for its stars (Bill Murray and Harold Ramis) and its director (Ivan Reitman), but a sort of vindication. To explain: Reitman directed, and Murray starred in, the enormously successful “Meatballs,” which was an entertaining enough comedy but awfully ragged. No wonder. It was shot on a shoestring with Canadian tax-shelter money. What Murray and Reitman prove this time is that, given a decent budget, they can do superior work--certainly superior to “Meatballs,” for starters. For Harold Ramis, who plays Murray's grave-eyed, flat-voiced, terminally detached partner in “Stripes,” this is a chance, at last, to come out from behind the camera. Ramis and Murray are both former Second City actors, but in Hollywood, Ramis has been typecast as a writer (“Animal House,” “Meatballs,” “Caddyshack”), maybe because he sometimes looks too goofy for Hollywood's unimaginative tastes.

In “Stripes,” Murray and Ramis make a wonderful team. Their big strength is restraint. Given the tendency of movies like this to degenerate into undisciplined slapstick, they wisely choose to play their characters as understated, laid-back anarchists. Murray enlists in the Army in a what-the-hell mood after his girlfriend throws him out, and Ramis enlists because one stupid gesture deserves another. They're older than the usual Army recruit, less easily impressed with gung-ho propaganda, and quietly amazed at their drill instructor, Sergeant Hulka, who is played by Warren Oates with tough-as-nails insanity.

The movie has especially good writing in several scenes. My favorite comes near the beginning, during a session when recruits in the new platoon get to know one another. One obviously psycho draftee, who looks like Robert De Niro, quietly announces that if his fellow soldiers touch him, touch his stuff, or interfere in any way with his person or his privacy, he will quite simply be forced to kill them. Sergeant Hulka replies: "Lighten up!" The movie's plot follows basic training, more or less, during its first hour. Then a romance enters. Murray and Ramis meet a couple of cute young military policewomen (P.J. Soles and Sean Young), and they happily violate every rule in the book. One funny scene: Murray and Soles sneak into the kitchen of the base commander's house and do unprecedented things with kitchen utensils.

It's an unwritten law of these movies that the last half hour has to involve some kind of spectacular development. In “Animal House,” it was the homecoming parade. In “Stripes,” the climax involves the Army's latest secret weapon, which is a computerized, armored, nuclear weapons carrier disguised as a recreational vehicle. Murray's platoon is assigned to go to Europe and test it. Murray, Ramis, and their girls decide to test it during a weekend holiday swing through the Alps. After they cross the Iron Curtain, all hell breaks loose.

“Stripes” is a complete success on its intended level--it's great, irreverent entertainment--but it was successful, too, as a breakthrough for Ramis, Reitman, and Murray, on their way to “Ghostbusters.” Comedy is one of the hardest film genres to work in. Nobody knows all its secrets, not even Woody Allen and Mel Brooks. Here's a comedy from people who know some of the secrets most of the time. 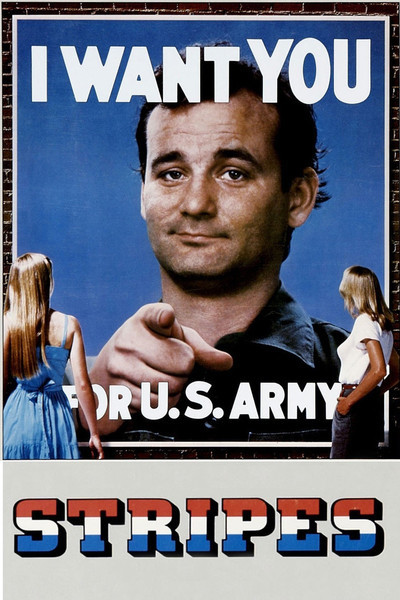