It's been leading up to this all spring. When David Spade got buried in crap in "Joe Dirt," and when three supermodels got buried in crap in "Head Over Heels," and when human organs fell from a hot-air balloon in "Monkeybone" and were eaten by dogs, and when David Arquette rolled around in dog crap and a gangster had his testicles bitten off in "See Spot Run," and when a testicle was eaten in "Tomcats," well, somehow the handwriting was on the wall. There had to be a movie like "Freddy Got Fingered" coming along.

Many years ago, when surrealism was new, Luis Bunuel and Salvador Dali made "Un Chien Andalou," a film so shocking that Bunuel filled his pockets with stones to throw at the audience if it attacked him. Green, whose film is in the surrealist tradition, may want to consider the same tactic. The day may come when "Freddy Got Fingered" is seen as a milestone of neo-surrealism. The day may never come when it is seen as funny.

The film is a vomitorium consisting of 93 minutes of Tom Green doing things that a geek in a carnival sideshow would turn down. Six minutes into the film, his character leaps from his car to wag a horse penis. This is, we discover, a framing device--to be matched by a scene late in the film where he sprays his father with elephant semen, straight from the source.

Green plays Gord Brody, a 28-year-old who lives at home with his father (Rip Torn), who despises him, and his mother (Julie Hagerty), who wrings her hands a lot. He lives in a basement room still stocked with his high school stuff, draws cartoons and dreams of becoming an animator. Gord would exhaust a psychiatrist's list of diagnoses. He is unsocialized, hostile, manic and apparently retarded. Retarded? How else to explain a sequence in which a Hollywood animator tells him to "get inside his animals," and he skins a stag and prances around dressed in the coat, covered with blood? His romantic interest is Betty (Marisa Coughlan), who is disabled and dreams of rocket-powered wheelchairs and oral sex. A different kind of sexual behavior enters the life of his brother Freddy, who gets the movie named after him just because, I suppose, Tom Green thought the title was funny. His character also thinks it is funny to falsely accuse his father of molesting Freddy.

Green's sense of humor may not resemble yours. Consider a scene where Gord's best friend busts his knee open while skateboarding. Gord licks the open wound. Then he visits his friend in the hospital. A woman in the next bed goes into labor. Gord rips the baby from her womb and, when it appears to be dead, brings it to life by swinging it around his head by its umbilical cord, spraying the walls with blood. If you wanted that to be a surprise, then I'm sorry I spoiled it for you. 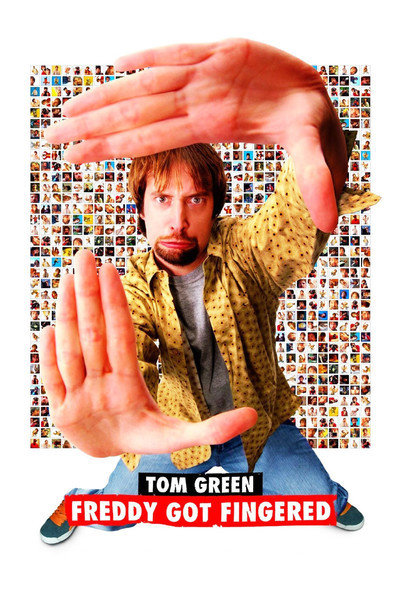