It’s interesting to see how many of this year’s South by Southwest films are directly or indirectly commenting on the state of America since Trump was elected. There are films like Jordan Peele’s brilliant “Us,” which could easily be read as a dissection of the division in this country which has made us our greatest enemy. Harmony Korine introduced "The Beach Bum" by talking about the ways it comments on 2016. And then there’s the comedic approach embedded within Jonathan Levine’s “Long Shot,” a rom-com with a political edge that will be one of this year's most beloved crowdpleasers.

With its commentary on how much a female candidate has to alter her personality to win over the electorate while a TV star sits in the White House, it’s impossible to miss the allusions to the election of 2016. But any sort of political statement—or even a particularly insightful one on gender dynamics, to  the film's detriment—ends up taking a backseat to one of the oldest stories in the cinematic book: two wildly likable stars putting a movie on their shoulders and carrying it in every way. For a century, people have been falling in love with romantic comedies and it’s usually not because of their embedded social commentary. It’s because they like the stars and want to see them find happiness. It’s been a long time since there’s been a rom-com with two stars as straight-up likable and easy to root for as Seth Rogen and Charlize Theron are here.

Fred Flarsky (Seth Rogen) is a journalist at an alt-weekly, the kind of guy who likes to drop f-bombs in his headlines and gets off on ruffling feathers and taking risks. The film opens with Fred infiltrating a White Power group and being willing to go as far as to get a Swastika tattoo to get the story. His journalistic pride is key to his identity, and so he can’t believe it when a conservative media mogul (played by a heavily made-up Andy Serkis) buys out the publication for which he writes. Fred packs up his bags and leaves the job he loves, going out for a day of drowning his misery in drugs and beer with his best buddy Lance (a fantastic O’Shea Jackson Jr.). His rich pal takes him to a fundraiser, where he crosses paths with his old babysitter, Charlotte Field (Charlize Theron), who just so happens to be Secretary of State.

Charlotte has recently been told by President Chambers (Bob Odenkirk) that the former TV star is tired of being leader of the free world and wants to now segue into being a movie star. He won’t be running in 2020, leaving the door open for Fields herself. With a team that includes the tough Maggie Milliken (June Diane Raphael) working to craft an image that will get her elected, Charlotte is also going to do a world tour to garner support for an environmental initiative in which she truly believes. But she remembers Fred, the wide-eyed kid who supported her decades ago. And he remembers her when she was sixteen and still passionate about the world. She decides to give him a job punching up her speeches, and, well, Fred and Charlotte get closer. He opens her up to new experiences and helps her find her voice again. She teaches him to care about something other than his opinion. And there’s some very R-rated humor along the way.

It's a little sticky politically to make a movie in 2019 that arguably asserts that the best way for a powerful woman to find herself is to let her hair down and dance to Roxette. And yet that moment is a perfect example of what works about “Long Shot,” in that Theron and Rogen sell it in such a genuine and joyful way that it’s easy to dismiss the politics and just give oneself over to the charm of it all. In that sense, despite its very raunchy sense of humor, “Long Shot” is an incredibly old-fashioned rom-com, a genre that has often relied on the charm of its stars more than politics or social commentary. People didn’t fall in love with “Pretty Woman” because of its commentary on sex workers—they fell in love with the stars and their chemistry. This genre is often more about a look, a laugh, a connection than it is a statement, and Levine remembers that enough to keep “Long Shot” clicking for most of its over-long 115 minutes. He knows this movie lives and dies on how much we like his leads and want to see them find happiness, and so he only uses the Trump/Clinton connections as a side dish. The main course is less “The American President” and more “Pretty Woman” (and this really is a gender-reversed version of that story if you think about it).

But if so much of the success of “Long Shot” rests on the backs of its stars, how do they carry that weight? First of all, Seth Rogen hasn’t had this kind of rom-com leading role in a decade and he’s improved as an actor in that time, shedding some of his man-child tics while also keeping just enough of them to make Fred into a version of that self-defeating friend we all have. Rogen is very funny, but the movie belongs to Theron, who proves yet again that she can do literally anything. Very few actors can segue so seamlessly from “Mad Max: Fury Road” to “Tully” to this and not miss a single beat. Her comic timing is perfect, her chemistry with Rogen is believable, and she does something that often sinks political movies in that we buy her as a political leader. It’s a great performance. Returning to the aforementioned Roxette scene again, she has a beat at the end of it that cuts through everything that one could say is wrong with this movie by just being deeply human.

“Long Shot” could have been tightened in several places and the party goes a little too long, but it’s easy to see Levine and his team falling in love with Fred and Charlotte as much as I suspect audiences will when this is released. Whatever side of the political fence you’re on and whoever you voted for in 2016, it will be hard or you not to fall in love with them too.

This review was originally published from SXSW on March 10th. 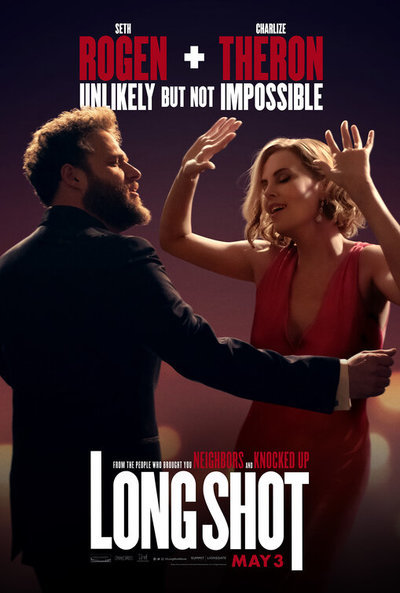 Rated R for strong sexual content, language throughout and some drug use.

Boyz II Men as Themselves