Harmony Korine’s “The Beach Bum” is kind of like when you go to a restaurant and see a list of ingredients for a dish that then tastes exactly like you expect it to. If you’re thinking “Matthew McConaughey as a carefree pothead poet who wanders the Florida coast from the director of ‘Spring Breakers,’ I know what this is,” well, you're not wrong. And yet the shaggy dog nature of this film, one that mimics its protagonist’s neverending belief that everything is just gonna be alright, alright becomes almost transcendent. Korine introduced the film by saying that he had made a movie that was a response to what happened in 2016 in the way that it’s about how we’re all looking harder for that “bliss moment.” Yes, the world is falling apart, but let’s get high with Snoop Dogg and Jimmy Buffett and have fun while we still can. And while that may not sound like enough to support a feature film, “The Beach Bum” works by never losing its tonal statement that all that really matters is what matters to you … man.

“He may be a jerk, but he’s a great man.” This line, said by his daughter Heather (Stefania LaVie Owen) pretty much sums up Matthew McConaughey’s Moondog, a man semi-famous for his published works of poetry and locally famous as one of those personalities that everyone in Key West has an anecdote about and most people have either gotten high with or had sex with. He’s stoned more often than he’s not, semi-naked most of the time, and barely has a care in the world. He’ll sleep on a beach, a pier, or in his wife Minnie’s (Isla Fisher) mansion. She’s ultra-wealthy and lives up the coast, where she cavorts with a rapper named Lingerie (Snoop Dogg). To say Moondog and Minnie have an open relationship would be an understatement, but they love each other and the sex is great when they’re together, as they’re forced to be for Heather’s wedding, the first major event in “The Beach Bum.”

Where Harmony Korine’s film goes from there I shan’t spoil, but let’s just say that Moondog is spun out of his comfort zone and sent on a journey to find himself again. “The Beach Bum” becomes not unlike a modern stoner version of The Odyssey with the epic hero reimagined as a stoner who encounters crazy personalities on his journey home such as Jonah Hill’s broad Southern caricature, Martin Lawrence’s very funny dolphin tour guide, and Zac Efron’s sociopathic rehab roomie. Throughout, Moondog barely breaks a sweat, even as he seems to be facing legitimate violence and legal threat. Everything will work out for Moondog. It always does.

McConaughey leans into his bongo-playing persona in a way that some people will dismiss as easy but actually gives a pretty great performance here. His daughter is right – Moondog is kind of a jerk. He’s that friend we all have who we need to be in just the right mood to go out with on a Saturday night. To say he lacks social decorum would be an understatement, and yet he also has a big heart and care for people in his life. He may not make your life better, but he will get you high enough that you don’t care about it anymore, and McConaughey very deftly balances a character that could have become way too abrasive and annoying. It helps that he’s surrounded by actors who seem to totally get what Korine is going for here, which often feels like a 95-minute party at one of Snoop Dogg’s mansions.

And yet there are points when “The Beach Bum” transcends that description. Korine’s visual gifts are on full display, capturing both the opulence of Florida and its scuzzy side in a way that finds beauty in both. And he once again uses music brilliantly, finding the right song for every occasion with an odd blend of everything from Van Morrison to The Cure (twice!) to Peggy Lee’s “Is That All There Is,” which plays in its entirety in a fantastic scene that features Moondog and Minnie singing and dancing along to it. The song really sums up the themes of this funny, ultimately sweet movie. We’ve seen so many films that are angry about the state of the world in 2019. There’s something inspired about one that reminds us “if that’s all there is than let’s keep dancing.”

This review was filed from the South by Southwest Film Festival on March 10th. 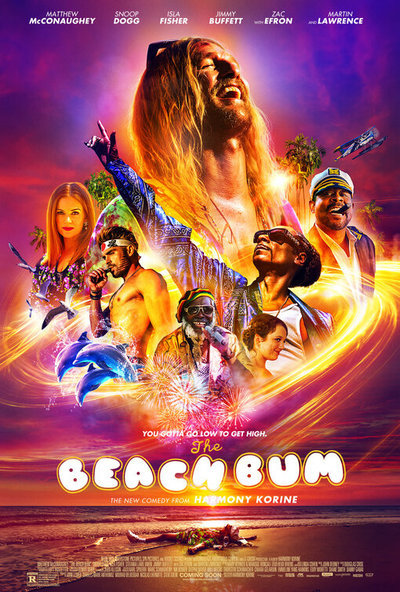 Rated R for pervasive drug and alcohol use, language throughout, nudity and some strong sexual content.