Screwball heroes on a dirty field

In sports and in movies, star quality counts. We may already know the rules of the game, and what strategy is going to be used in each inning, but it can be a joy just watching the pros perform. George Clooney's "Leatherheads" goes into overtime for no good reason, and the only high-wattage star in the lineup is Clooney himself, but man, he knows how to play. The guy's got smarts, wit, timing, a winning face, a good eye -- hell, he's probably even got great legs.

He's also exceptionally savvy about Hollywood movie history and seems to feel quite comfortable with his own place in it. Film fans used to speculate about whether Clooney could become the Cary Grant of our time, and now we know he's our Clark Gable and William Holden and Dean Martin, too.

As a director, Clooney has made only three movies, all of them good and none of them alike: a dark satirical political comedy set in the 1970s, "Confessions of a Dangerous Mind"; a dark political drama set in the 1950s, "Good Night, and Good Luck," and now a screwball/ football romantic comedy of the 1920s, "Leatherheads."

The story, set in 1925, is ripped from today's headlines -- the tale of how money and rules killed professional sports back in the days when there was no such thing. No professional football, anyway. Jimmy "Dodge" Connolly (Clooney), a not-quite-grizzled vet in a younger man's game, does things the old-fashioned way: down and dirty and for the fun of it. He not only plays for the Duluth Bulldogs, he writes the newspaper stories that lionize them, which he dictates to his perpetually soused press pal Suds (Stephen Root) of the Duluth Democrat.

When the Bulldogs go broke (this was back before taxpayers generously subsidized what is theoretically a multibillion-dollar private industry), Dodge cooks up a scheme to recruit Princeton football phenom and bona-fide war hero, Carter "The Bullet" Rutherford (John Krasinski from the sitcom "The Office," in the Joel McCrea-Gary Cooper-Henry Fonda-Eddie Bracken role). With Bullet as their marquee name, the reunited Bulldogs sell every seat in the house.

It seems the patriotic war-story legends surrounding him may have been somewhat exaggerated, and her job is to pump them up, then knock him down. But journalism is never that simple. Lexie takes a fancy to both the youngster and the oldster, and the question becomes who's gonna wind up as the Ralph Bellamy, Dodge or Bullet?

What we have here, as you can plainly see, is an amalgam of vintage screwball comedies ("His Girl Friday," "Meet John Doe," "Hail the Conquering Hero," "Mr. Deeds Goes to Town," "The Lady Eve"), spiked with a little pigskin slapstick (Harold Lloyd's "The Freshman," Buster Keaton's "College," the Marx Brothers' "Horsefeathers").

Clooney knows his movies and has no doubt picked up a few things from Joel and Ethan Coen, makers of the broader and faster-paced "The Hudsucker Proxy" (1994) and "O Brother, Where Art Thou?" (2000) -- named after a gag in Preston Sturges' "Sullivan's Travels" and starring Clooney himself.

The script is less than effervescent, but Clooney and his cast are game. Although "Leatherheads" probably has fewer dull moments than your average NFL contest, sometimes you wonder if the clock is still ticking or if somebody's called a timeout. A scene will end and, just as you're moving on to the next one, you may find yourself wondering: Why was that there?

Yet there's always something interesting to notice: a face, a throwaway visual joke, the way the winter rain on a window contributes to the tone of a scene, or the sight of the muscular 1920s Chicago skyline in the distance behind the ballfield.

Even before the opening credits montage is over, Clooney demonstrates the fleetness of his comedic footwork -- getting a better laugh from a cow and a ball than you'd have any right to hope for. He knows how to compose a shot (the retro short-focus camerawork by Newton Thomas Sigel immediately puts you in a classic Hollywood frame of mind) and how to cut comedy so that it doesn't cramp the actors' style.

Best of all are the picture's abundant grace notes. Clooney's a team player, and his generosity toward his collaborators, as an actor and a director, shines throughout the movie. You'll probably remember the image of a hulking high schooler named Big Gus (Keith Loneker) standing and beaming at a train station. And Belinda (Heather Goldenhersh), the archetypal flapper with a mouth of potty. And a moment in a speakeasy, after a long night and a big brawl, in which soldiers and football players gather drunkenly around the piano (manned by score composer Randy Newman himself) to sing "Over There."

In the final chorus, the camera drifts over to a Bulldog with a buzz-cut named Curly (Matt Bushnell), who finishes the song by himself in a gentle, lingering closeup -- one that reminds you of why we go to the movies. 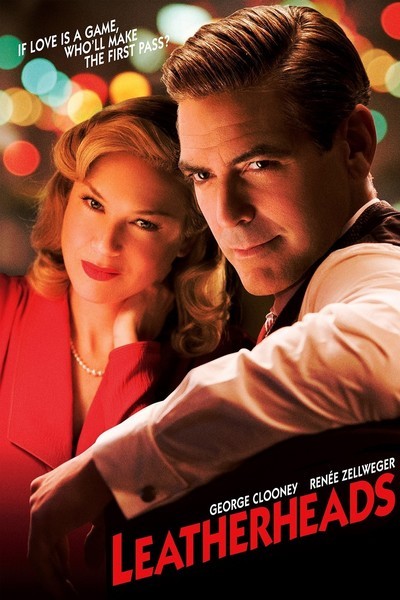