“Jason Bourne” may entice ticket buyers with prospects of a creative and adrenalin-pumping reunion between Matt Damon and director Paul Greengrass, a duo that went beyond typical blockbuster expectations with “The Bourne Supremacy” and “The Bourne Ultimatum.” Being a fan of both of those movies, I too had high hopes for a return to form for the character who shares a monogram with 007. But it’s mere minutes into “Jason Bourne” that something is wrong. Is it the stoic, nearly dialogue-less (25 lines in the entire film) take on Bourne? Is it the more-hyperactive-than-ever action cinematography and editing, designed to make every phone call answered and strident walk taken seem important? How about the familiarity of a plot that literally echoes questions these characters have already asked and answered? “Jason Bourne” is a film I kept trying to like. It just wouldn’t let me.

After learning the truth of his progression from David Webb to superspy Jason Bourne in the previous two Greengrass films and, of course, Doug Liman’s “The Bourne Identity,” JB (Matt Damon) is essentially in hiding. Sure, he pops up for the occasional street fight, but he’s a loner, the kind of guy with no current attachments, deeply off the grid. (It’s worth noting that Greengrass and co-writer Christopher Rouse are just barely interested in setting up where Bourne has been and what he’s up to in 2016.) It’s mere minutes before Nicky (Julia Stiles) drags Bourne back on the radar of the nefarious Powers That Be, this time personified by CIA Director Robert Dewey (Tommy Lee Jones). Nicky wants to give Bourne even more of the background behind the Treadstone project, particularly the details about what really happened to Bourne’s father, Richard Webb (Gregg Henry).

Of course, Dewey can’t let that happen, and he plans to use CIA agent Heather Lee (Alicia Vikander) and an assassin known merely as “Asset” (Vincent Cassel) to keep his undercover dealings undercover. One of the reasons that Dewey is particularly panicked about the return of Bourne is that he’s also deeply involved with a tech pioneer named Aaron Kalloor (Riz Ahmed, currently seen on HBO's “The Night Of”), the head of a company called Deep Dream that promises intense levels of privacy to its customers but has been working with the CIA in secret. “Jason Bourne” includes several of today’s greatest hot button concerns—internet privacy, government intrusion—but they feel like window dressing.

Matt Damon said in a press conference in 2007 that he thought his iteration of Jason Bourne was over; he had reached the end point of his character’s journey, his search for his identity. He stated, “… all of that internal propulsive mechanism that drives the character is not there, so if there was to be another one then it would have to be a complete reconfiguration, you know, where do you go from there? For me I kind of feel like the story that we set out to tell is has now been told.” He clearly still feels that way. Damon can be a complex, character-driven actor with the right material, but his heart’s not in this. Tommy Lee Jones feels even less invested with the little bit of character he’s been given, and poor Alicia Vikander might as well be named Plot Device in that we know exactly what her arc is going to be from the minute we see her. Perhaps worst of all, Greengrass finds a way to waste Vincent Cassel, one of our most physically vibrant and menacing actors. Cassel does most of his acting scowling through a sniper scope, and isn’t allowed to really break out until the end of the film. Only Riz Ahmed makes any impact on a performance level, doing a lot with very little—watch the way he subtly plays a successful businessman who knows the skeletons are about to fall out of his closet. There's a much better version of "Jason Bourne" that focuses on him, contrasting his arc as a man caught up in something greater than himself with our hero's.

Ahmed registers because one senses an urgency to his character’s plight, which is not the case with the rest of the film. Rarely has there been so much intensity in the pursuit of a story that feels like it has no stakes. When “Jason Bourne” is done, ask yourself what everyone was yelling, running and fighting about. Good luck coming up with a satisfying answer. It’s as if Greengrass and company knew that they couldn't orchestrate an intriguing new arc for their beloved character, so they just repeated one. The film is like Jason Bourne fan fiction in how much it completely reworks things we’ve seen before, only with a few more years of cyberterrorism buzzwords to give viewers the illusion of not just depth but a plot.

Even Greengrass’ trademark style feels uninspired. Barry Ackroyd (“The Hurt Locker”) is an undeniably talented cinematographer, but his style doesn’t have the same kinetic energy as Oliver Wood’s work in the original trilogy, which put us right in the middle of the action. It’s a fine line, but a crucial one; Wood’s camera feels urgent, as if we might get punched too, whereas Ackroyd’s feels cluttered and desperate. Returning editor Christopher Rouse (who’s cut all of Greengrass’ films) is the technical MVP here, giving the film a propulsive energy that could convince some people they’re watching something fun and exciting just by sheer force. However, when it’s over, even viewers more eager to forgive this failed creative reunion will wonder what it is that they just watched, and what purpose it serves other than financial. And why no one figured out a new, engaging way to tell a story that’s already been told. 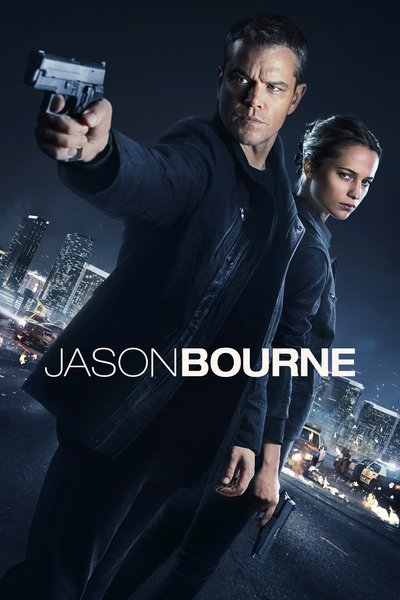 Rated PG-13 for intense sequences of violence and action, and brief strong language.