"Irrational Man," seemingly Woody Allen's 328th motion picture, stars Joaquin Phoenix as a philosophy professor named Abe who becomes obsessed with murdering a judge, and Emma Stone as the awestruck student he romances. It is not merely a bad film. It is a collection of notes for a film that never quite evolved to the rough draft stage, much less cohered into a finished movie. That makes it more dispiriting than other notorious Woody Allen misfires, like "Celebrity" and "Curse of the Jade Scorpion" and "Scoop," where at least you could kind of see what the filmmaker was going for, and sense the movie lurching in a certain direction even as it kept stumbling over its shoelaces and crashing into things.

The biggest problem is the script—or what passes for the script. "Irrational Man" has been directed by Allen with  characteristic grace and economy (he's been a better director than writer for about twenty years), and it has been acted with what could be described as heroic resourcefulness; in scene after scene, Phoenix and his costars strive to create characters that seem plausibly human, and occasionally succeed. There are other compensatory virtues as well, including Daris Khondji's leafy widescreen images of Rhode Island, and a lively needle-drop score anchored by The Ramsey Lewis Trio, which lends a Kubrickian chill to the talk of despair, alcoholism and murder.

But every good effort by cast and crew is undone by Allen's disorganized, boringly declamatory screenplay, which often sounds like a bad impersonation of Allen's dialogue by somebody who has listened to his films with a superficial ear, and come away thinking that the key to sounding smart is dropping great thinkers' names and oversimplifying their thoughts. Both characters have voice-over narration as well. When the voice-over isn't making observations that require no prompting ("A lot was very wrong with Abe") it's describing actions mere seconds before or after they're performed by the characters, as if providing its own narration track for the blind.

Abe is the film's number one purveyor of tone-deaf assertions that are misleading at best, cut-and-pasted at worst, like "Kant would agree that in a truly just world, there's no room for lying" and "Doestoevsky got it" and "Anxiety is the dizziness of freedom" (a Kierkegaard crib). And Abe is so oblivious to how full-of-it he sounds that he ramps up to  proclamations with phrases like, "You know, Simone de Beauvoir once posited, quite correctly..."

If Abe were supposed to be a college educated twit like Diane Keaton's character in "Manhattan," his manner of speaking would make dramatic sense even as, to paraphrase Allen's character in the latter film, you fantasized about knocking his other contact lens out. But Abe is supposed to be a philosophy professor of some renown, albeit one who has fallen on hard times thanks to depression, a drinking problem, and an inability to keep Abe, Jr., in his pants. In fact, Abe is supposed to be so impressive that colleagues and supervisors look past his painfully obvious and socially unacceptable alcoholism (he blithely swigs from a flask in public, like a high school kid trying to seem reckless and dark) and approach him at parties to say things like, "I loved your essay on situational ethics." ("Thank you," Abe replies, "It caused a little controversy with the philosophy department at Adair"—whereupon, in my dreams, the movie cuts to Woody Allen being handed a trophy for writing the clumsiest expository sentence of all time.)

Phoenix strives to deliver these lines rather than retch them up like hairballs. He succeeds more often than you might think. As his worshipful student, Jill, Stone pulls off almost as many miracles. In some ways, Stone's is the harder role. Where we instantly believe that Abe would be attracted to Jill because of her youth and beauty and relative innocence (who wouldn't be, when she's played by Emma Stone?), it takes more persuasion to convince us that Jill, a smart and responsible young woman with a handsome, sensitive young boyfriend (Jamie Blackley), would find this shambling, unshaven, forty-something quote-machine irresistible. Abe is nearly as insufferable as Max von Sydow's painter in "Hannah and Her Sisters" and nowhere near as amusing, and his go-to garment is a t-shirt that hugs his bloated belly so tightly that it makes him look pregnant.

How smart and self-aware are these characters supposed to be? Is Allen making points about the emotional ignorance and moral bankruptcy of educated people? How much of a joke is Abe's tragic backstory, which includes a mother who committed suicide by drinking bleach, a best friend who died stepping on a mine in Iraq, and numerous doomed attempts to do good by visiting the world's disaster hot spots? The script's dramatic and satirical elements are so unformed here that you'd have to leave them in a kiln for a week before you could call them half-baked. Allen barely seems to care about developing Abe and Jill and their world, much less filling out potentially vivid supporting characters like Parker Posey's Rita, a colleague who escapes the doldrums of her unhappy marriage by enticing the new guy with promises of "great grass" (she time-warped in from 1978, apparently).

There's an unnerving arrogance to the script's lack of polish and shape. The movie seems to think we'll care deeply about its characters simply because they're on screen saying and doing things. This attitude is merely irritating until the film's near-midpoint, when "Irrational Man" evolves from Allen's umpteenth older man-younger woman romance (troublesome enough, given that Abe resists Jill over and over until he can't anymore) into a murder conspiracy. Abe and Jill are out at lunch when they overhear a woman in the next booth tearfully telling her friends about a corrupt family court judge. Allen has of course been plagued by accusations that he molested Dylan Farrow, the young daughter of his ex, Mia Farrow, and at points along the way he has asserted that the judge in his own custody evaluations was incompetent and ethically compromised. Abe becomes obsessed with murdering the family court judge because doing so would rid the world of an evil, worthless man, and strike a blow for justice far beyond anything Abe could accomplish as a writer, and nobody would be able to trace the crime back to him because he and Jill have no personal connection to the case.

The result plays like Allen's daydream of murdering the judge who kept him apart from the girl he had been accused of molesting. This is nestled inside what feels like a more familiar, self-justifying fantasy about Allen's affair with his wife Soon-Yi, Farrow's daughter with conductor Andre Previn. One needn't have a opinion, informed or otherwise, on Allen's private life and alleged crimes to find this scenario repugnant—not just because it all seems on first glance blatantly autobiographical, but because Allen keeps it at arm's length, and wrapped up in lush imagery and jaunty music and plausible deniability, as he tends to do.

Everything is conceived in mordant comic terms, so that we seem to be watching a retread of themes and situations that Allen covered with more flair in "Crimes and Misdemeanors" and "Match Point," his two most blatantly Dostoevsky-inspired movies. But here Allen doesn't seem to be exploring and illuminating his capacity for ruthlessness, or our gossipy imaginings of same, but merely rubbing everyone's face in the scandal, even as he somehow, simultaneously denies to us that he's doing any such thing.

It's as if Allen is determined to give his detractors rope with which to hang him. That's his prerogative. But it would have been nice if he'd given them a good movie to watch while they braided the noose. 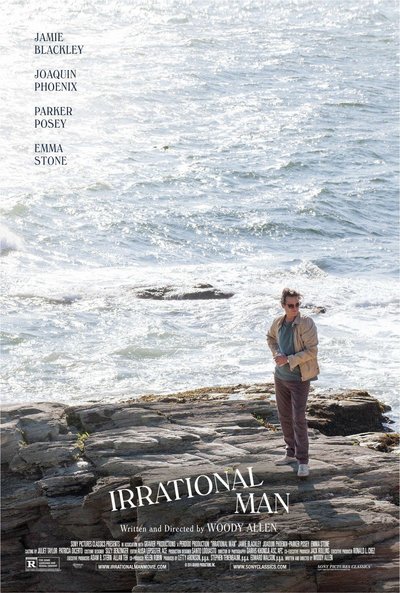