While watching “Home,” a comical animated spin on alien-attack thrillers with the usual tacked-on touchy-feely messages, I began to get bored as did the families seated around me. Rare is the child-filled theater that falls silent during the opening minutes of any movie, especially when they should have been laughing at Steve Martin’s supposed wild-and-crazy vocals as Smek, the daffy leader of a nomadic race of pastel-hued outer-space blobs known as the Boov.

Then I started to grow nostalgic. Before donning cheap plastic 3-D glasses was considered de rigueur and when artists still prided themselves on drawing images by hand, Disney made a brave move and released the two-dimensional  “Lilo & Stitch” in 2002—just as the computerized revolution that began with “Toy Story” and continued with “Shrek” and “Ice Age” was about to make such non-CG cartoon titles nearly obsolete.

Somehow, this disarming story about a lonely orphaned Hawaiian girl whose best pal is an ill-tempered fugitive space creature that looks like a mutant koala bear and acts like John Belushi at an all-day buffet found its way into the hearts of moviegoers.

It didn’t rely on a green ogre picking wax out of his trumpet ears or a squirrel-rat being continually tortured by the forces of nature. The charming oddity managed to capture the spirit of the islands by extolling the concept of “ohana,” which celebrates family and unity, while spinning Elvis Presley oldies on its soundtrack. Whatever sci-fi  elements were involved were kept to a minimum. Instead, the focus was on appealing characters, relatable relationships and delightful forays into Polynesian kitsch. And, despite being an underdog, the low-tech Oscar nominee for best animated feature ended up saying “aloha” to $271 million in ticket sales worldwide.

How the animation world has changed and not always for the better. I kept thinking about “Lilo & Stitch” while watching “Home,” a decidedly disappointing effort based on the popular kid-lit book “The True Meaning of Smekday” from the already embattled folks at DreamWorks Animation. After “How to Train Your Dragon 2” lost to Disney’s “Big Hero 6” at the Academy Awards and “Penguins of Madagascar” underperformed last fall, the studio needed its lone offering this year to be a substantial leap forward instead of this obvious exercise in playing it safe.

I longed for relief from all the relentless joking, the antsy visuals overflowing with bubbles and the frantic pacing as the Boov overtake Earth and kick humans to the curb. Much of the plot is amazingly similar to “Lilo & Stitch”: Tip (voiced with verve by Rihanna), a pre-teen girl originally from Barbados who somehow evaded the intergalactic interlopers, encounters a socially awkward Boov named Oh (Jim Parsons from TV’s “The Big Bang Theory”). Oh, who eschews contractions when he speaks (a lot of “do nots” and “cannots”) in a supposedly amusing patois, is on the run after mistakenly alerting his race’s mortal enemy to the location of their new digs.

Besides surviving on what looks like cans of Chef Boyardee, Tip is desperate to find her mother (Jennifer Lopez ) who was whisked away to an unknown locale with the rest of humanity. That leads her to initially mistrust Oh and lock him in a convenience store cooler. He cutely stares through the glass and asks repeatedly, “Can I come in from the out now?”

While most of the Boov tend to be cowardly and lack the personal skills needed to make friends, they are quite adept when it comes to gadgets and useful tools. Oh wins Tip over by reconfiguring her damaged car into a flying vehicle by using the store’s snack machines, with slushie drinks providing the fuel. Consider that one of the flavors is called “Busta Lime,” a gag repeated at least three times, and that will tell you all you need to know about the level of the humor. From there, “Home” turns into a globe-spanning road trip adventure shared by the Tip, her cat named Pig and Oh.

What I wanted to do was to get to know Tip and Oh a bit better before they got to gawk at a Boovified Statue of Liberty and endanger the Eiffel Tower. But mostly they argue incessantly and quite loudly until they naturally become bosom buddies. There are some clever moments, such as Oh’s big dance number to Stargate’s “Dancing in the Dark.” However, we then have to listen to Tip say, “Shake your Boov thing.” Matters could be worse. Oh in the book is named—wait for it—J. Lo. One assumes that is why Ms. Lopez was hired since she gets only a handful of lines and sings one song on the soundtrack (Rihanna, however, gets a bunch of tunes).

Mostly, I was disturbed by some story points that should have been addressed from the beginning. Yes, the Boov can manipulate gravity to their advantage. But since when do Earthlings simply act like sheep and not rebel when outsiders force them into mass captivity? Did no one even attempt to fight back? Did the president or the military just surrender? Strangely, when we are shown where they are exiled, it appears to be a theme park (dubbed Happy Humantown) with rides, ice cream cones and smiling faces. And why is Tip apparently the only one who managed to avoid being sucked up into a giant vacuum tube and taken away by these creatures who look like a cross between a jellyfish and an eraser?

You do not submit, people. Has no one seen “War of the Worlds” or, if they have more arcane tastes, “Mars Attacks!”?

It is too bad that “Home” isn’t better since it does offer a much-needed break from one unfortunate tradition at DreamWorks. Tip is not just one of the studio’s few female main characters (I count two others: Susan aka Ginormica in “Monsters vs. Aliens” and Gloria the hippo in the “Madagascar” series). She is the first female lead of color, complete with beautiful natural hair and real-girl body proportions.

As it concluded (with another dance number, of course, because you got to shake that Boov thing as much as possible), “Home” did make me appreciate one thing: Being able to head back to my home and dig out my copy of “Lilo & Stitch.” 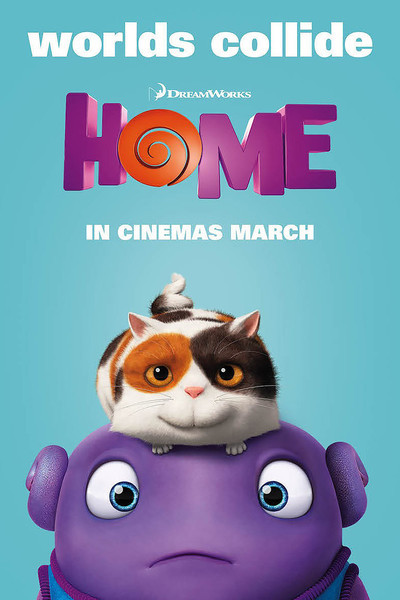