How to Train Your Dragon 2

What the sea was to "Finding Nemo," the sky is to "How to Train Your Dragon 2"—a boundary-free backdrop of natural beauty that allows the audience to experience first-hand the wonders down below or up above in an immersive way that only the best in 3-D animation can do.

In fact, the sequel to DreamWorks’ highest–grossing cartoon feature that doesn’t star a grouchy green ogre whose name rhymes with "heck" is the unusual second chapter that hits new heights in almost every way. Just the soaring and swooping dragon-racing aerial stunts (a regular occurrence now that all the residents of the dank burg of Berk are co-existing peacefully with the steed-like creatures) that consume the opening minutes are worthy of a Viking edition of Cirque de Soleil.

But what truly impresses isn’t just the depiction of the primordial and often cruel environs so vividly realized, you can practically feel the icy air, wind and water slapping against your skin. Nor is it how sleekly leathery hero dragon, Toothless, retains his fierce, wild nature despite continuing to be as friskily playful as a newborn pup. Or how Gerard Butler manages to give one of his finest performances by relying only on his native Scottish burr as Stoick, a Viking chief in the twilight of his reign as he prepares to pass the torch to his brainy and now slightly more brawny son, Hiccup (Jay Baruchel).

Instead, what got to me was my moist-eyed appreciation of a long-ago-married couple, suddenly reunited after 20 years apart, who are surprised to discover that the embers of love still burn inside of them. How many fast-paced blockbusters actually bother to find room for a breather that is touching, tender and real—especially in an entertainment largely aimed at kids. Add to that an impassioned ballad, "For the Dancing and the Dreaming," that acts as a renewal of vows and it just might be one of the summer’s best romantic movie moments.

That the relationship causes the peg-legged handyman and trainer of novice Vikings, Gobber the Belch (Craig Ferguson, the perfect feisty sidekick for Butler), to actually stride out of the closet in a subtle spoken aside is a rarity of its own in a PG-rated arena like this.

Oddly enough, the battles with evil forces who wish to enslave the dragons into an army are the least interesting portion of the film. Director/screenwriter Dean DuBlois, soloing this time without partner Chris Sanders, falls prey to the more-is-more school of sequel-dom. There are two villains, one a hunky young sea-faring mercenary known as Eret (Kit Harrington of "Game of Thrones"), the other a merciless madman called Drago Bludvist (Djimon Hounsou of "Gladiator" fame) whose very name strikes fear. There are also two massive white beasts that look like something that would result if Jabba the Hutt and the Kraken had an offspring.

At least Eret gives Kristen Wiig as Ruffnut, the Viking answer to the man-hungry young Carol Burnett and one of Hiccup’s cohorts, a chance to inject some humor in the form of openly lusting over the pirate’s bulging pecs. Also scene stealers are the poor sheep with their forlorn Buster Keaton faces (they seem inspired by the Aardman-created woolies in the Serta mattress commercials), who must endure being scoring objects during the dragon-racing games.

One of the better additions, however, is recent Oscar winner Cate Blanchett as the voice of Valka, a sort of New Age hermit who devotes herself to being a Jane Goodall-like protector of dragons, especially those who have been hurt or abused, and who shares Hiccup’s preference for peace over war. This "crazy feral vigilante dragon lady" hides out in an ice-protected sanctuary where her flock of brightly hued charges flutter around like butterflies amid lush foliage and waterfalls.

As in the first "Dragon," the film doesn’t shy away from the harsh realities faced by this clan of warriors with chests as broad as meat lockers at a time when loss of limb and often death was a routine fact of life. What truly sets this animated franchise apart from countless others is how it wears its heart openly and honestly atop its armor. If anyone is concerned about the way women are presented on the big screen these days, just look at how an evolved male like Hiccup respectfully treats his girlfriend Astrid (America Ferrera) and the portrayal of Blanchett’s Valka.

But the most rewarding and complex relationship rightfully remains the one between Hiccup and Toothless. In these films, they are as inseparable as Roy Rogers and Trigger. 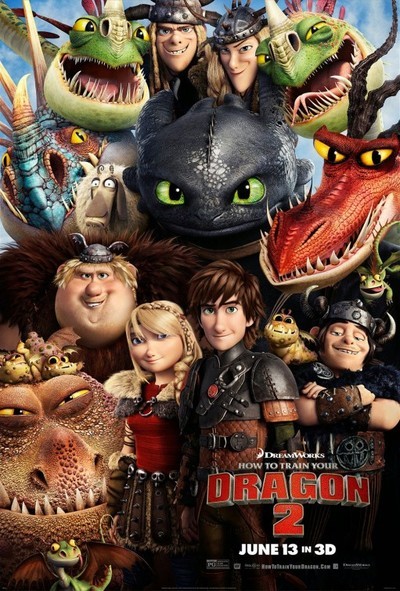 Rated PG for adventure action and some mild rude humor.