I know I am part of an infinitesimal minority, but I wish Hollywood would consider a one-year moratorium on superhero films. Between all the origin stories, the sequels, the spinoffs, the spoofs and the too-soon reboots, I have had my fill of big-name actors in ridiculous outfits allowing their stunt doubles or digital stand-ins to save the world.

When even a Denzel Washington action flick like “The Equalizer” plays like a start-up entry in a comic-book franchise, matters are getting out of hand.

Of course, such a break in the crash-boom action would at this point probably cause the ruination of the movie business as we know it. No less than 24 new titles are slated for the next six years. Studios might be forced to come up with some fresh ideas that aren’t already known quantities pre-packaged as a brand. That is, once they run out of YA novels to adapt for the screen.

Which is why I was chagrined to learn that Disney, which has been nicely re-establishing itself as animation powerhouse beyond its Pixar label after the success of “Wreck-It Ralph” and “Frozen,” was digging into the Marvel vault for toon-worthy material.

As a result, my expectations were low for “Big Hero 6,” based on an obscure comic book with a Japanese manga sensibility that introduces yet another makeshift gang of warriors. In other words, the dreaded origin story.

Much to my surprise, it didn’t take long to warm to this tale set in the gleaming near-futuristic metropolis known as San Fransokyo where trolley cars and an Asian-infused Golden Gate Bridge happily co-exist with dumpling emporiums and Tokyo-inspired skyscrapers. And how could I resist when, early on, a kick-ass gal is heard commanding a guy to “Stop whining! Woman up!”

I also was taken from the outset by the 14-year-old hero actually named Hiro (engagingly voiced by Ryan Potter), an overly cocky punk who already has his high-school diploma. He is right on trend with other troubled misfit geniuses in films this fall including those in “The Imitation Game” and “The Theory of Everything.” Initially, the scrawny lad invests his smarts into winning back-alley robot fights with deceptively simple electronic toys of his own design.

But after Hiro has a brush with the law, older brother Tadashi (Daniel Henney) invites him to check out his college’s robotics lab with thoughts of enrolling. There he meets an A-team of tech specialists: adrenaline junkie Go Go Tomago (Jamie Chung, the source of the above ”Woman up!” remark); upbeat chemistry whiz Honey Lemon (Genesis Rodriguez); cautious neat-freak Wasabi (Damon Wayans Jr.); and fanboy sidekick Fred, a sort of nerd answer Scooby-Doo pal Shaggy (T.J. Miller of TV’s "Silicon Valley," whose humorous asides fall flat as often as they tickle).

Thanks to a nifty science project involving microbots, Hiro is accepted at the school. Then tragedy strikes after a fire traps and kills both Tadashi and Prof. Callaghan (James Cromwell), who was going to be Hiro’s mentor. With no parents and his brother gone, Hiro retreats into his bedroom in the apartment above a coffee shop run by his worrywart Aunt Cass (Maya Rudolph).

“Big Hero 6” truly achieves liftoff, however, when Hiro happens upon Baymax, Tadashi’s invention, who is the perfect fill-in as a big brother. A really big brother who is so viscerally huggable, you can practically squish him with your eyes. Imagine a white 10-foot-tall inflatable robot programmed to tend to the sick who is a cross between the Michelin Man, the Stay Puft marshmallow character from “Ghostbusters” and a futon mattress.

A calm in any storm, Baymax is dedicated to easing pain of all sorts and certainly performs that function for a grieving Hiro. He also has a great sense of physical humor not unlike such plus-size comics as John Candy and John Belushi as he gingerly squeezes in and out of tight spots or stumbles about as if drunk when his battery is low. Even his attempt at a fist bump is an ingenious running gag.

However, there is the rest of the plot to deal with and, if you haven’t guessed, Hiro along with a soon souped-up  Baymax and the four lab geeks form a crew of avengers. Their mission is to seek a mysterious Kabuki-mask-wearing baddie suspected of setting the inferno as well as stealing Hiro’s invention. There are sundry loud action sequences but none are as thrilling as the sight of Hiro and a now-aerodynamic Baymax forming a bond similar to that of Hiccup and Toothless in "How to Train Your Dragon" as they soar hither and yon above the urban sprawl.

“Big Hero 6” becomes increasingly more predictable in its final half hour as it makes a few stabs at a surprise twist or two. This is no “The Incredibles,” Pixar’s dysfunctional-family version of a superhero saga, when it comes to originality. Baymax is great but he’s no Edna Mode.

But “Big Hero 6” deserves praise for promoting an anti-violence message amid mayhem that–save for the fire–doesn’t physically maim anyone nor involve guns or traditional weapons. An action adventure that puts brain ahead of brawn as a valued commodity is always reason to celebrate. Add in the considerable heart that Baymax contributes (with elements borrowed from both “WALL-E” and “Up”), and you have a winner.

Stay until the very end of the credits if you want to see a reveal about Fred’s parentage. And resist dawdling at the concession stand before being seated because you don’t want to miss a second of “Feast.” This stylized short shot from an ankle-level point of view condenses 12 years in the life of a voracious Boston terrier named Winston. In between greedily gobbling his way through a smorgasbord of table scraps--spaghetti, nachos and pizza--the chow hound manages to stop devouring long enough to play Cupid for his owner. A sprig of parsley never seemed so romantic.

However, as a dog owner myself, I am hoping “Feast” doesn’t end up encouraging children (or adults) to start feeding their own pets such not-good-for-them food as saucy meatballs. Because I doubt that Disney will agree to pick up any resulting cleaning bills. 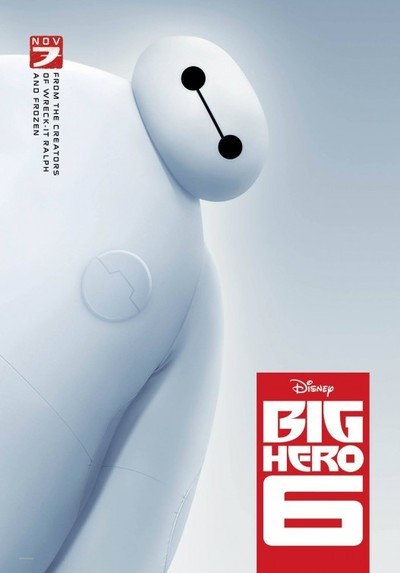 Rated PG for action and peril, some rude humor, and thematic elements