The scene-stealing penguins from the “Madagascar” franchise get their own movie in the appropriately titled “Penguins of Madagascar.”

One would think a little of these crazy creatures would go a long way. And indeed, this family-friendly animated comedy from co-directors Eric Darnell and Simon J. Smith is predicated on a single joke: the idea that these overconfident penguins—who fancy themselves as super spies—are completely bumbling and inept, yet they manage to wriggle out of every tricky situation not only to survive but thrive and save the day.

But the pacing is so zany, the jokes are so rapid-fire and the sight gags are so inspired that it’s impossible not to get caught up in the infectious energy of it all. The script (credited to John Aboud, Michael Colton and Brandon Sawyer) finds enough avenues into that one joke to make the premise seem, if not consistently fresh, at least enjoyable. And the formidable voice cast, featuring John Malkovich and the ubiquitous Benedict Cumberbatch, takes this silly work absolutely seriously, and that’s one of the most amusing bits of all.

“Penguins of Madagascar” serves as both an origin story and a spin-off, as it follows these adorable animals on an adventure of their own. (The zoo animals from the original series, voiced by Ben Stiller, Chris Rock, David Schwimmer and Jada Pinkett Smith, are nowhere to be found.) We begin in Antarctica, where a long line of penguins is waddling across the merciless, snowy terrain to nowhere, because (as even they acknowledge) they’re not allowed to think for themselves. This is just what they do—and what the documentary crews expect them to do, in a knowing jab at the over-saturation of penguin-related properties over the past decade or so.

Once the familiar, raspy tones of Werner Herzog’s narration kick in, describing the penguins’ dismal state in his typically wonderful, dramatic way, we know we’re in for a whole ‘nother level of humor aimed exclusively at the adults in the audience. Yes, all animated movies are crammed with self-referential jokes and cheeky pop-culture references, but “Penguins of Madagascar” does this consistently well. The fact that so much of the word play is so intentionally groan-worthy—including a running bit involving celebrity names—is part of the fun.

The slick Skipper (voiced by series veteran Tom McGrath) is the foursome’s self-appointed leader. Kowalski (Chris Miller) is the brains of the operation and the group’s resident pessimist. Rico (Conrad Vernon), the least developed of the four, essentially swallows things and makes grunting noises, but he’s useful in a pinch. Then there’s the soft and innocent Private (Christopher Knights), the de facto little brother, whom the other three have known from the moment he hatched.

During one of their covert missions, they find themselves taken captive by Dr. Octavius Brine (Malkovich), a mad scientist who’s actually an evil, shape-shifting octopus in disguise named Dave. Seems he’s been tracking the four penguins all over the globe, resentful of the fact that they keep stealing his thunder at various zoos and aquariums. His goal is to capture as many penguins as possible from around the world and zap them with a serum that will turn them into monstrous versions of themselves and make them seem less cuddly and appealing to the masses.

(This was essentially the motivation of the dastardly El Macho in “Despicable Me 2,” by the way. He kidnapped nearly all of Gru’s minions, shot them up with high-tech jelly and turned them into an army of evil, purple minions to help him carry out his nefarious plan. I have a 5-year-old; I’ve seen this movie a lot.)

Skipper and his pals try to thwart Dave’s plan, but also on his tail (or his tentacles) is a group of legitimate animal super spies led by a wolf whose name is Classified, in a bit of who’s-on-first humor. Cumberbatch voices the character with total authority and gravitas, and to think that he has this and the voice of the fearsome dragon Smaug from the epic “Hobbit” franchise in him—as well as the brilliant mathematician Alan Turing in this week’s “The Imitation Game”—speaks to his limitless versatility.

Basically from here, it’s spies vs. spies in a series of wild action sequences, and the antics wear a bit thin after a while. “Penguins of Madagascar” seems just about right at 90 minutes, and couldn’t have run much longer. Still, if you’re running around doing your holiday shopping and looking for a brief respite, you’ll be glad you went for a ride with these flightless birds. 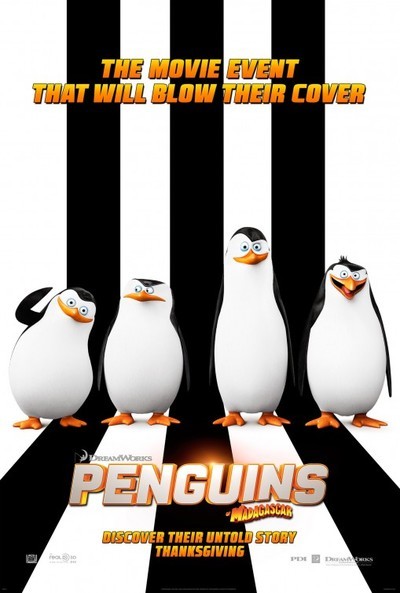