"Toy Story" creates a universe out of a couple of kid's bedrooms, a gas station, and a stretch of suburban highway. Its heroes are toys, which come to life when nobody is watching. Its conflict is between an old-fashioned cowboy who has always been a little boy's favorite toy, and the new space ranger who may replace him. The villain is the mean kid next door who takes toys apart and puts them back together again in macabre combinations. And the result is a visionary roller-coaster ride of a movie.

For the kids in the audience, a movie like this will work because it tells a fun story, contains a lot of humor, and is exciting to watch. Older viewers may be even more absorbed, because "Toy Story," the first feature made entirely by computer, achieves a three-dimensional reality and freedom of movement that is liberating and new. The more you know about how the movie was made, the more you respect it.

Imagine the spectacular animation of the ballroom sequence in "Beauty and the Beast" at feature length and you'll get the idea. The movie doesn't simply animate characters in front of painted backdrops; it fully animates the charactersandthe space they occupy, and allows its point of view to move freely around them. Computer animation has grown so skillful that sometimes you don't even notice it (the launching in "Apollo 13" took place largely within a computer). Here, youdonotice it, because you're careening through space with a new sense of freedom.

Consider for example a scene where Buzz Lightyear, the new space toy, jumps off a bed, bounces off a ball, careens off of the ceiling, spins around on a hanging toy helicopter and zooms into a series of loop-the-loops on a model car race track. Watch Buzz, the background, and the perspective -- which stretches and contracts to manipulate the sense of speed. It's an amazing ride.

I learn from the currentWiredmagazine that the movie occupied the attention of a bank of 300 powerful Sun microprocessors, the fastest models around, which took about 800,000 hours of computing time to achieve this and other scenes -- at 2 to 15 hours per frame. Each frame required as much as 300 MBs of information, which means that on my one-gigabyte hard disk, I have room for about three frames, or an eighth of a second. Of course computers are as dumb as a box of bricks if they're not well-programmed, and director John Lasseter, a pioneer in computer animation, has used offbeat imagination and high energy to program his.

But enough of this propeller-head stuff. Let's talk about the movie. Lasseter and his team open the film in a kid's bedroom, where the toys come to life when their owner is absent. Undisputed king of the toys is Woody, a cowboy with a voice by Tom Hanks. His friends include Mr. Potato Head (Don Rickles), Slinky Dog (Jim Varney), Hamm the Pig (John Ratzenberger) and Bo Peep (Annie Potts). The playroom ingeniously features famous toys from real life toys (which may be product placement, but who cares), including a spelling slate that does a running commentary on key developments (when Mr. Potato Head finally achieves his dream of Mrs. Potato Head, the message is "Hubba! Hubba!).

One day there's a big shakeup in this little world. The toy owner, named Andy, has a birthday. Woody dispatches all of the troops in a Bucket of Soldiers to spy on developments downstairs, and they use a Playskool walkie-talkie to broadcast developments. The most alarming: The arrival on the scene of Buzz Lightyear (Tim Allen), a space ranger.

Buzz is the most endearing toy in the movie, because he's not in on the joke. He thinks he's a real space ranger, temporarily marooned during a crucial mission, and he goes desperately to work trying to repair his space ship -- the cardboard box he came in. There's real poignancy later in the film when he sees a TV commercial for himself, and realizes he's only a toy.

The plot heats up when the human family decides to move, and Woody and Buzz find themselves marooned in a gas station with no idea how to get home. (It puts a whole new spin on the situation when a toy itself says, "I'm a lost toy!") And later there's a terrifying interlude in the bedroom of Sid, the dreadful boy next door, who takes his toys apart and reassembles them like creatures from a nightmare. (His long suffering sister is forced to hold a tea party for headless dolls.)

Seeing "Toy Story," I felt some of the same exhilaration I felt during "Who Framed Roger Rabbit." Both movies take apart the universe of cinematic visuals, and put it back together again, allowing us to see in a new way. "Toy Story" is not as inventive in its plotting or as clever in its wit as "Rabbit" or such Disney animated films as "Beauty and the Beast"; it's pretty much a buddy movie transplanted to new terrain. Its best pleasures are for the eyes. But what pleasures they are! Watching the film, I felt I was in at the dawn of a new era of movie animation, which draws on the best of cartoons and reality, creating a world somewhere in between, where space not only bends but snaps, crackles and pops. 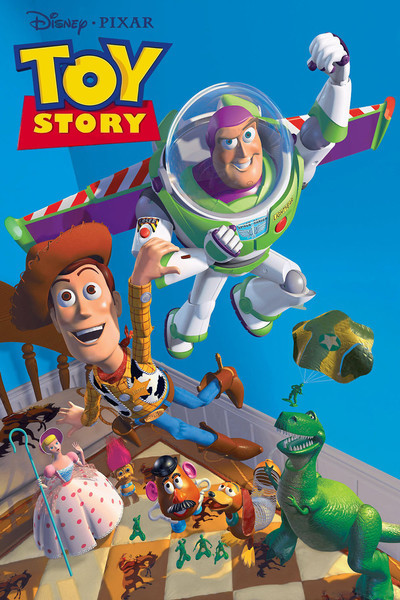