“This is the first time I’ve watched 20 films in 10 days, and I love movies. And the one thing I really took away from this experience is how the world views women from the female characters that I saw represented. And it was quite disturbing to me, to be honest.”

The documentary “Half the Picture” opens with this frank and provocative observation from actress Jessica Chastain when she served as a Cannes juror in 2017—even after Sofia Coppola became just the second woman in 70 years to be honored with the festival’s best director prize for her work on “The Beguiled.” It sets the tone of this cogent examination of why female filmmakers continue to struggle to rise through the ranks in Hollywood—and why it pretty much remains a “straight white male boy’s club” despite such notable money makers in recent years such as Phyllida Lloyd’s “Mamma Mia,” Catherine Hardwicke’s “Twilight,” Sam Taylor-Johnson’s “Fifty Shades of Grey,” Kathryn Bigelow’s “Zero Dark Thirty,” Jennifer Lee’s “Frozen” (alongside co-director Chris Buck) and, of course, Patty Jenkins’ “Wonder Woman.”

Documentaries that rely on a steady stream of talking heads—interspersed here with fleeting film clips—usually are not my favorite. However, when those heads belong to talented and perceptive women who rarely get a chance to speak their minds let alone get hired to make a movie, I can definitely make an exception. “Half the Picture” rounds up a diverse group of 40 or so TV and movie directors—black, white, Asian, Hispanic, members of the LGBT community, old hands and fresh faces—as well as journalists, academics, activists and others involved in the fight to open more doors for women so they can get the same work opportunities that their male counterparts take for granted. No men, however, are allowed.

One might wonder why the lauded likes of Coppola and Bigelow, the only female to ever win a directing Oscar for “The Hurt Locker,” don’t chime in. But director Amy Adrion in her feature debut has gathered enough varied voices and personal anecdotes to provide plenty of valuable insights into why it is that women make up about half of all film-school directing majors but represent less than five percent of  directors behind of the top-grossing U.S. films for the past 10 years. And the number of female minority helmers is positively miniscule—.006 percent. Yes, this has been a hot topic for a number of years. But the fact that it hasn’t gotten better and has even grown worse has taken on some urgency of late, given the ever-growing #MeToo movement. Some men clearly have grown too accustomed to using their of power perches as a way to prey upon and abuse women in the industry without suffering the consequences—or to look the other way when big moneymakers behave badly.

The initial question addressed by Adrion is how certain ladies first came to find themselves behind a camera. Penelope Spheeris of “The Decline of Western Civilization” music docs’ fame, still hilariously feisty at 72, got her start by being able to carry the then-heavy equipment used by crews. She even continued to do her job while eight and a half months pregnant. “The kid was fine,” she says with typical sass. When Spheeris worked on the first season of “Saturday Night Live,” her main job was showing comic Albert Brooks how to make movies. But producer Lorne Michaels—she does a wicked impression of him—never gave her a similar break on the show. Feeling guilty, he hired her to do “Wayne’s World,” which became both a huge comedy hit in 1992 and her calling card.

Ava DuVernay was a publicist who secretly pursued becoming a filmmaker in her early 30s and got a boost as the first African-American woman to win a directing award at Sundance for 2012’s “Middle of Nowhere.” Jill Soloway, creator of Amazon’s “Transparent,” was a writer for HBO’s "Six Feet Under" who got tired of other directors failing to do her scripts justice. Martha Coolidge scored her 1983 debut “Valley Girl” because the producers wanted a woman to direct what they considered a “sexploitation” film. She saw it as an updated “Romeo and Juliet” fairy tale. One caveat: She had to agree to feature naked breasts in four scenes. No problem.

Their rise and that of others would encourage the next generation of female storytellers. As an undergrad in college, Tina Mabry (OWN’s “Queen Sugar” series, created by Ava DuVernay and Oprah Winfrey) desperately wanted to go to film school after noticing that 2000’s “Love & Basketball” and 1999’s “Boys Don’t Cry” both had women directors—namely, Gina Prince-Bythewood and Kimberly Peirce, who share their own stories with Adrion.

But the playing field is far from equal. Unlike men who hit the jackpot their first time out or score an indie winner early in their career and reap rewards for their efforts, achieving a blockbuster doesn’t necessarily put women on the most wanted list. Spheeris didn’t get to cash in by directing “Wayne’s World 2”—a guy was hired instead. But, as she notes with a knowing grin, “It’s cool. It flopped.” Little wonder she has basically stopped making movies all together, especially after doing soul-depleting money grabs like “The Beverly Hillbillies” and “Black Sheep.” “I make houses,” she says of her shift into real estate. “It’s like making a movie. I’m telling all these dudes what to do”—a statement punctuated by a self-aware laugh. But unlike a movie, she adds, “no one is dicking around with it.”

As for Hardwicke, she thought she would be offered an office on a studio lot or a three-picture deal after kicking off the “Twilight” franchise with a box-office bang. Instead, she was paid half as much for her next film and men were hired to oversee the four subsequent sequels by building upon her vision.

One of the more infuriating examples of a terrific female talent being mistreated came at the hands of Pixar. Brenda Chapman, the animation studio’s first-ever female director—who put her heart and soul into creating 2013’s “Brave”—was asked to leave the project due to the ever-popular “creative differences” and was replaced by a man, Mark Andrews. At least Chapman got to go onstage when the film won an Oscar and thank her own daughter, Emma, for being her inspiration.

An array of roadblocks, from genre biases when it comes considering a woman to oversee horror, sci-fi or action films to the fact that 73% of critics on Rotten Tomatoes are male, stands in the way. And, yes, motherhood can be a challenge given the hours and devotion that filmmaking can require. But this is no pity party. There is a sense that sisters are doing it for themselves and each other as more female decision makers make inroads behind the scenes. The best news is that an investigation by Equal Employment Opportunity Commission found discriminatory practices at each of the major studios—and talks are ongoing to settle those charges. “Half the Picture” may not fill in all the blanks but it is a start. 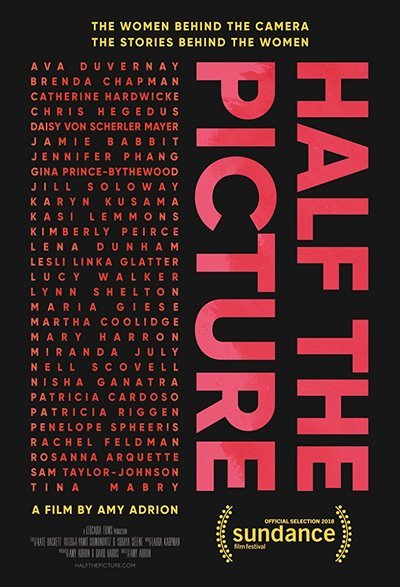 Rosanna Arquette as Herself

Lena Dunham as Herself

Sam Taylor-Johnson as Herself

Ava DuVernay as Herself

Mary Harron as Herself

Jamie Babbit as Herself

Jill Soloway as Herself

Karyn Kusama as Herself

Kasi Lemmons as Herself

Catherine Hardwicke as Herself

Penelope Spheeris as Herself

Kimberly Peirce as Herself

Jennifer Warren as Herself

Lynn Shelton as Herself

Nisha Ganatra as Herself

Miranda July as Herself

Gina Prince-Bythewood as Herself

Lesli Linka Glatter as Herself

Martha Coolidge as Herself

Patricia Riggen as Herself

Brenda Chapman as Herself

Tina Mabry as Herself

Lucy Walker as Herself

Daisy von Scherler Mayer as Herself

Jennifer Phang as Herself