James Franco’s filmography as a director fascinates me. He uses his weight as a power player to get projects to the big screen that clearly interest him, often giving off the impression that he read a book he liked and just called up some friends to make a movie of it. There’s something admirable about that kind of passionate, instinctual way of making movies, and it has led to adaptations of work by Cormac McCarthy, John Steinbeck, and William Faulkner. And this kind of DIY passion made him the perfect fit for “The Disaster Artist,” his most successful directorial effort to date, and a film that's essentially about a DIY filmmaker who became an icon. This approach to filmmaking also leads to a number of misfires because one can often sense that initial passion dissolving on the screen. That’s certainly what happens early in his latest co-directorial credit, the abominable “Future World.” One can imagine Franco and his buddies seeing “The Bad Batch” or watching “Mad Max: Fury Road,” renting some motor bikes and dirtying some clothes, and then realizing they forgot to write an actual movie.

To say that “Future World” borrows liberally from George Miller’s milieu would be an understatement. He may want to look into royalty checks (although that implies this will make money, which seems unlikely). This ticks SO many of the “Fury Road” boxes, from extended sequences of masked men on motor bikes to the story of a kept woman who becomes empowered to a mythical place in this barren landscape that promises a better future called Paradise Beach. That’s where our hero Prince (Jeffrey Wahlberg) wants to get, believing that he will find there the medicine to save to his dying mother (Lucy Liu).

Prince’s journey takes him to a place called Love Town, run by futuristic pimp Love Lord, played by, of course, Snoop Dogg (casting is the most creative thing about “Future World”). In one of the film’s very few brief glimpses of creativity, the dancers and prostitutes of Love Town are literally controlled by clients and the Love Lord through the use of what looks like shock collars around their necks. And yet Franco and co-director Bruce Thierry Cheung don’t have much to say about controlling women in this future vision. It’s just an interesting concept/visual for them, and then they move on. Everything in “Future World” is skin-deep, shallow versions of deeper material from other films.

This is certainly the case with Ash (Suki Waterhouse), an android first awoken by the evil Warlord (James Franco) but who eventually escapes with Prince. Why? Because the movie says so. She has an awakening and revolts against her captor and those who would use her for sex or violence and she takes off with Prince to the find the medicine. Along the way, they run into mostly bad guys, including a scene-stealing turn from Milla Jovovich, who looks like she came from a more interesting movie but shows up way too late into this one to save it.

Most of “Future World” is incoherent and boring. A typical “action sequence” consists of men riding motor bikes over hills or a poorly choreographed fight. There’s a non-stop obtrusive, “futuristic” score to try and keep you awake but even that starts to become numbing. Among many problems, perhaps the biggest is that Ash and Prince are deadly dull as leading characters. There’s a scene after they take off together in which they talk about whether or not she has a soul during which I swear I felt mine leaving my body.

Despite the number of times I’ve been burned by James Franco’s directorial efforts (check out my review of “The Institute,” a movie stolen by Franco’s mustache, for another example), I’m still eager to see what he does next. He often takes risks that other directors wouldn’t and I’m always interested in filmmakers who seem to be making what they want to make regardless of concern about the bottom line. The problem here is that while Franco probably wanted to make his own “Mad Max” at one point, by the time the initial buzz of the project faded and he got to the desert, you can tell that even he just wanted to go home. 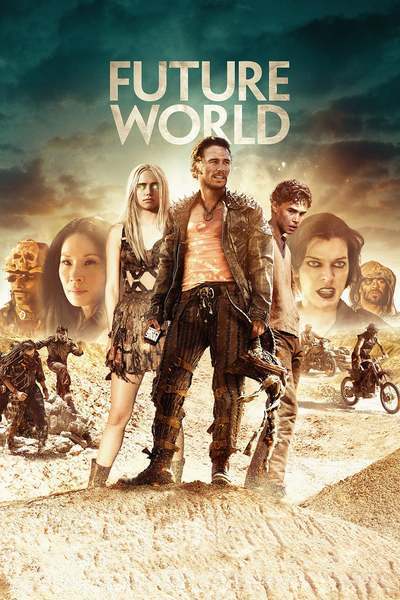 Lucy Liu as The Queen