A young girl missing an arm and leg snakes through a mass of drug-addled bodies lit by garish neon. The impressive muscles of cannibals glisten in the noonday sun. A horde of pregnant women tote machine guns and have serene expressions. These images on their own gesture toward a grimy, odd, dystopian fable. The failure of these occasionally hypnotic images to string together a coherent tone and emotional landscape is all the more galling considering this is the sophomore film from writer/director Ana Lily Amirpour.

Amirpour’s first film, “A Girl Walks Home Alone At Night,” culled inspiration from a multitude of genres in a way that heralded the emergence of a distinctive directorial voice. Unfortunately, what made Amirpour compelling as a raconteur with her previous film gets lost on the broader canvas of "The Bad Batch." It’s astounding that a director that portrayed such stylistic panache in her debut could produce such an aimless, empty, muddled spectacle that reaches for the mythic but stumbles toward the mundane. The characters grate. The framing feels sloppy. The strange mix of genres and obvious influences sit uneasily next to each other. Late in the film, Keanu Reeves as a heavily mustachioed messiah figure called The Dream asks a question to the effect of, “Is all this really necessary?” I found myself wondering the same thing.

“The Bad Batch” centers uneasily on Arlen (Suki Waterhouse), a young Texan woman released into the wild desert frontier where all the undesirables of America are forced to weather dangerous terrain to survive. This is a world brimming with heavily muscled cannibals, bedraggled savages, scavengers, and mad men. Arlen is quickly captured by cannibals, only to have her arm and leg sawed off. But she musters the strength to escape her captors, setting off on an absurdist journey in which she meets a slew of off-beat characters, each more infuriating than the last.

Despite the way cinematographer Lyle Vincent capably shoots the dusty landscape, blaring neon of The Dream’s slice of paradise, and gleaming night sky, this world doesn’t feel expansive. It feels oddly claustrophobic because the world-building is too scattershot and poorly conceived. The near-wordless opening of Arlen being tagged, released into the wild, having her limbs sawed off, and her eventual escape presents a slew of intriguing avenues to explore. These first 15 minutes are undoubtedly the strongest thanks to the sure tone and unflinching violence which is simultaneously absurd and nauseating. But Amirpour presents a surprising lack of conviction in her own voice making the film’s most recognizable trait its utter confusion. The various styles—Russ Meyer level exploitation, road trip bonanza, would-be love story, revenge tale—sit uneasily next to one another, never cohesively forming into a singular approach.

Various ideas are flirted with only to be dropped altogether before they can have any impact. At times, Amirpour’s script gestures at real-life political allegories, like when Cuban immigrant Miami Man (Jason Momoa) mentions that he was forced into this landscape because of his immigration status. But Amirpour isn’t incisive or sensitive enough to develop such a storyline. The casting of Jason Momoa further undercuts the power of this brief moment as well. Momoa playing a Cuban immigrant who sports an accent that improbably tips into Mexican caricature is just one of the many examples of offensive racial politics.

[This paragraph contains spoilers.] That there is continuous, grisly violence isn’t surprising considering the dystopian setting the characters find themselves trapped in. But how this violence is shot proves telling. Amirpour and Vincent are never more gruesome or detailed than when it comes to the deaths of two black characters. The more important of the two is Maria (Yolanda Ross). She’s Miami Man’s wife and the mother of his child, Honey (Jayda Fink), who hints at her issues with the cannibalism that proves to be their livelihood. Although she isn’t directly responsible for Arlen’s predicament she’s unceremoniously killed in front of Honey by her. Arlen is set up as an avenging angel who becomes a potential love interest for Miami Man and a poor mother figure for Honey. No one mourns Maria’s death. She’s all but forgotten by the people in her life. Not by Armirpour though. Her corpse is seen once more. This time a crow incessantly pecks at her eyes creating a scene that is starkly cruel and unnecessary. [End spoilers.]

Violence in “The Bad Batch” has neither artistic nor narrative purpose. Characters wield vengeance in ways that doesn’t track with how they are introduced. Arlen is an especially frustrating character, shifting from avenging angel to demure would-be love interest whenever the story desires. What drives Arlen’s confounding decisions beyond mere survival? Why would Arlen be drawn to Miami Man given the vengeance she sought earlier? Why is The Dream framed as a villain when his dope pool, surprising kindness and strange harem of pregnant women seem to offer the only semblance of community in this world? The best that can be said is that the actors are very committed to their roles.

Reeves leans into the ridiculous nature of the world, drawing out his words and leveling his glare forcefully. Jim Carrey goes for it, unrecognizable as The Hermit, a dirty and surprisingly kind mute who wanders the desert vista without any discernible goal. He lurches, stares, and smiles with maniacal abandon. The performance doesn’t exactly work, but it is at least more distinctive than Diego Luna, who leaves no impression whatsoever. The less said about Momoa’s appalling accent and his lack of chemistry with anyone in his vicinity the better.

If “The Bad Batch” had a striking lead performance much could be forgiven. Unfortunately, Waterhouse is a pallid cinematic presence. Her glare isn’t steely but perennially confused. Her “Texas” accent becomes especially grating during a seemingly never-ending sequence in which Arlen gets high on acid and stumbles through the desert marveling at the starry sky while speaking insipid platitudes. This torpid scene in particular demonstrates how this sloppy handling of moods and rote visuals prohibits “The Bad Batch” from at least being an intriguing albeit scattershot genre exercise.

The striking voice and perspective that Amirpour demonstrated in her previous feature is nowhere to be found in this rank display of meaningless over-indulgence. The visual and sonic excess of “The Bad Batch” initially hides the failures of the film, but, ultimately, it’s impossible to ignore that this is a film with neither engaging emotional threads nor the kind of panache that makes such cinematic mayhem worth it. 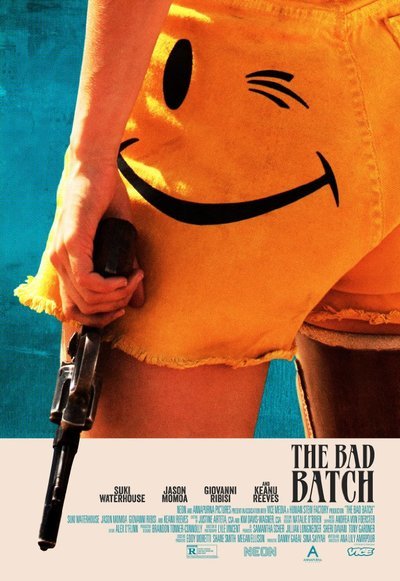 Keanu Reeves as The Dream

Cory Roberts as The Bridgeman