The title "Friedkin Uncut" might be a bit of an exaggeration. The director of "The Exorcist," "The French Connection" and other touchstones is also this nonfiction film's principal source of anecdotes and facts, and having reached the grand old man stage of his career, his stories can feel a bit too rehearsed, too obviously calculated to frame a legacy. And you won't find much in the way of contrarian takes in the film's interviews with Friedkin's collaborators and big-name fans. Aside from Gina Gershon, who says Friedkin made her feel pretty worthless during the filming of "Killer Joe" in order, he later explained, to get a better performance out of her, most of the commentary is laudatory, sometimes worshipful, in the manner of a biographical video preceding the bestowing of a lifetime achievement award.

Director Francesco Zippel makes some odd choices as he tells Friedkin's story, including leaving in a bit where Ellen Burstyn struggles to remember the title of the Pulitzer-prizewinning play written by her "Exorcist" costar Jason Miller, and cutting to stylized closeups of furniture, bottles and glasses to illustrate anecdotes for which no footage or photos exist. (Modern documentaries seem to have lost faith in the power of a closeup of someone telling a story, but that's a whole other discussion.) And aficionados of the director's life and work may grow frustrated with the film's avoidance of some of the more unsavory stories about Friedkin psychologically manipulating and even physically abusing his collaborators and subjects. (He's on record as having slapped documentary subjects and actors to get a certain reaction out of them.)

Still, there's something to be said for building a movie around a living legend who runs his mouth without evident fear of censure, or even being called ridiculous, because the result is always a good show, even when the subject is saying things so wild or silly that they make the viewer's eyes roll like tires tumbling down a steep mountainside in Friedkin's jungle thriller "Sorcerer." Friedkin kicks things off with an extended comparison of Jesus and Hitler as avatars of good and evil that starts to crumble before he’s halfway done with it, and he tends to stumble whenever he ventures into philosophical territory.

But he's aces at telling stories about filmmaking and expounding on the lessons he's learned and unlearned during fifty-plus years in the business, and it's in this aspect that "Friedkin Uncut" reveals its usefulness. Anybody who has made a movie of any kind will appreciate the granular insights offered by Friedkin—and even more so, the analysis served up by filmmakers and actors, including Francis Ford Coppola, Quentin Tarantino, Gershon, Burstyn, Walter Hill, Matthew McConaughey, Michael Shannon, William L. Petersen, Juno Temple, Philip Kaufman, cinematographer Caleb Deschanel, and more. Even viewers of a certain age who grew up on Friedkin's movies and watched the major ones over and over will come away from this movie feeling as if they understand him in a new, deeper way.

The key to Friedkin's cinema is his experience as a documentarian. His first feature, "The People vs. Paul Crump," was about a convicted armed robber and murderer in Chicago who would've been executed had Friedkin not taken a camera into the jail and told the man's story so convincingly, including his protestations of innocence, that the governor of Illinois intervened to get him released. From that point forward, Friedkin continued to incorporate a documentarian's sense of intense physical reality into every movie he made, whether it was a horror film like "The Exorcist" or "Bug," a crime drama like "Killer Joe" or "Sorcerer," a cop-on-the-edge picture like "The French Connection" or "To Live and Die in L.A." Whether shooting a foot chase, a car chase, an exorcism, or a couple's descent into madness, Friedkin battered the audience with details that made them feel as if they were right there next to the characters.

Coppola says that if he had made "The Exorcist," " ... I would probably have dealt with evil in terms of metaphor ... Billy shows it. He shows it over and over again in the most direct possible way. In Billy's film it's not implied; it's shown. He doesn't philosophize about evil, he shows you evil." Friedkin approached the "French Connection" car chase in a similar way, to the point of potentially murderous irresponsibility, shooting some of the most kinetic point-of-view shots from a car driving at high speed through Brooklyn neighborhoods without a permit. The climactic sequence of trucks traversing a rickety, rain-soaked bridge in "Sorcerer" were likewise documentary records of actors and stunt performers doing dangerous things that could have gotten them killed.

Related, though less unnerving, are stories confirming that Friedkin prefers to shoot as few takes as possible. Sometimes he secretly films performances he's told the actors are only rehearsals, and resists their requests to do more takes to refine a performance or try something different. This, to put it mildly, is not how most directors work (with notable exceptions like Clint Eastwood, also legendarily averse to doing more than a few takes of a scene).

But actors seem to appreciate, or at least accept, the pressure-cooker demands Friedkin places on them. McConaughey, the title character of "Killer Joe," seems to relish them: his eyes widen as he talks about how Friedkin's one-take approach ratcheted up his focus and freed him up to "just go for it." Ultimately, even though Friedkin is making films of fictional stories, he still seems to be trying to capture an ineffable something that will disappear from the room or the street or the set the instant he calls cut.

That's why he's okay with small mistakes, such as the camera crew plainly reflected in a car door in one shot from "To Live and Die in L.A." Deschanel wanted to do that shot over, but Friedkin refused, reasoning that everyone who sees a movie knows cameras are used to make them, and besides, if an audience member fixates on one small reflection in a part of the image where nothing important is occurring, the scene has bigger problems.

Although Friedkin was notoriously grandiose at certain stages of his career, he comes across as mostly calm, self-deprecating and centered here, at least when he's concentrating on the nuts and bolts of moviemaking. "Out of this work there can come art," he says. "Of course there has, and it can. [But] I don't have a perception of myself as an artist." 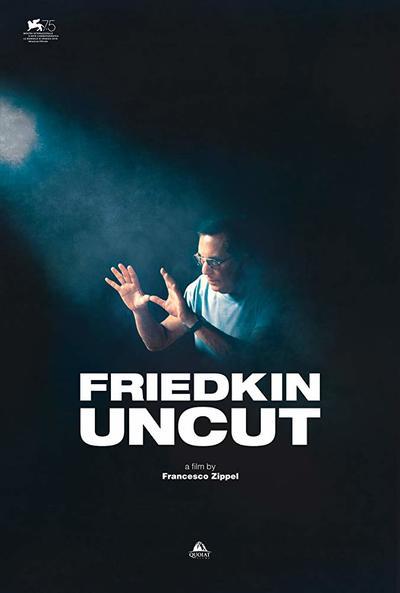 William Friedkin as Himself

Quentin Tarantino as Himself

Juno Temple as Herself

Matthew McConaughey as Himself

Gina Gershon as Herself

Wes Anderson as Himself

Michael Shannon as Himself

Edgar Wright as Himself

Damien Chazelle as Himself

Ellen Burstyn as Herself

William Petersen as Himself

Dario Argento as Himself

Philip Kaufman as Himself

Walter Hill as Himself