How do we process unimaginable betrayal? How do we overcome the kind of events that forever alter the trajectory of a life we so desperately want back? These are just two of the questions addressed by Christian Petzold’s masterful “Phoenix,” a film that firmly cements its director as one of the most impressive working today. With echoes of “Vertigo,” and a deeply confident visual language, Petzold’s film resonates long after its perfect ending. This is a riveting piece of work that never loses sight of its human story while also serving as a commentary for how an entire country deals with tragedies like war. A film this satisfying on every level—one that can be enjoyed purely for its narrative while also providing material for hours of discussion on its themes—is truly rare.

“Phoenix” opens with a face profiled in darkness. It is the face of Lene (Nina Kunzendorf), a woman driving a bandaged and bloodied passenger back to Berlin. Her face has been badly damaged, but she is a survivor of a concentration camp. After a brief encounter at a checkpoint, the pair drives further and headlights fill the screen before the title comes up. This story will clearly be one of darkness to light, even if it’s a light that sometimes blinds you.

We learn that the passenger is Nelly Lenz (Petzold’s collaborator, Nina Hoss), a German-Jewish nightclub singer, who, from the appearance of photographs and discussions with friend Lene, had a happy life. She was married to a handsome, confident man named Johnny (another Petzold regular, Ronald Zehrfeld). On October 4th, Johnny was taken in for questioning by the SS. Two days later, he was released, and Nelly was transported to a concentration camp. Did Johnny betray his wife’s Jewish background? Clearly. And yet Nelly refuses to believe it. She wants her old life back. And that means denial that her husband was and is a self-serving monster. After her plastic surgeon advises her that she can look like anyone and start a new life, she tells him, “I want to look exactly like I used to.” She is defiantly, stubbornly in denial about what has happened to her.

Over Lene’s objections, Nelly returns to Berlin, seeking out Johnny. She is a shattered woman in a city of rubble. She tells Lene, “I no longer exist.” The relationship, the friends she now sees only in pictures, even the city she once lived in—they’re all gone. She finds some semblance of familiarity in Phoenix, the nightclub that literally looks like an oasis in ruins. It’s like a dream that people find amidst the rubble of a bombed-out city. And that’s where she finds Johnny. He grabs her one night. He has a plan. He needs someone to pretend to be his dead wife, so he can claim her inheritance as there’s no evidence that his wife is dead. “You have to play my wife.” And the parallels between “Phoenix” and “Vertigo” come into strong focus as Johnny begins to turn this woman he believes is a stranger into the wife he betrayed, and, in doing so, brings Nelly back to life.

Every choice in “Phoenix” has been carefully considered and yet never in a way that it smothers the realism of the piece. It’s a film that has a deep cinematic language that avoids calling attention to its style. Petzold’s choices are subtle, from the way he frames the expressive faces of his actors to the choice of “Night and Day” in a crucial club scene to a climactic conversation that takes place on a train track, so deeply symbolic of looking in one direction to the past and the other to the future (as well as carrying historical weight with the trains that took people like Nelly to concentration camps). Dark and light, rising from the ashes, the overhead lighting or neon red of the Phoenix sign—Petzold plays so subtly with visual expression of his themes that he doesn’t draw attention to them, just allows them to be the background to his human drama.

And that human drama is where Nina Hoss takes center stage. Watch the scene in which she takes off her hat in a club after seeing Johnny walk by for the first time. She calls his name, happily, even though she knows what he’s done. It’s a name she’s called so many times before. He looks past her. Or maybe he looks at her and doesn’t see her. She can’t be there. His brain can’t even recognize the possibility that she would be. Hoss puts her hand to her mouth in horror. It’s not Johnny’s betrayal but Johnny’s dismissal that hurts her now. This walking embodiment of when things made sense can’t see her anymore, and so when he gives her the chance to “become Nelly” again, she takes it. At one point, Johnny asks Nelly to help craft a story about what he believes is her false narrative of her time in a concentration camp. Of course, the story Nelly starts to tell is true. Hoss holds her hands to her face, shaky, unable to speak fluidly. And Johnny is equally uncomfortable. The fiction he believes he’s creating and the reality they’re both denying are starting to intersect. Hoss is simply amazing in this scene, and really throughout the film.

To be fair, Zehrfeld is very good as well. Watch a moment in which he comes home to find Nelly in the right dress, made-up, and looking more like Nelly of the past. Is that a moment of recognition on his face? Awareness of what he’s done? No, it can’t be. He can’t be that person and she can’t be alive. She's a ghost, a reminder of what he's done and what the entire world lost in WWII.

If we're lucky, a few times a year we get as complete a package as “Phoenix.” We get character studies with performances as strong as Hoss and Zehrfeld are here every now and then, or we get auteur-driven films with complex visual choices and an emphasis on style. It’s uncommon to see a film so balanced that it serves as a commentary on the human need to deny war and betrayal while never losing sight of the story of a pianist and nightclub singer in 1945 Berlin. “Phoenix” works on so many levels, it's the kind of piece that can be dissected and appreciated for decades. And I expect it will be. 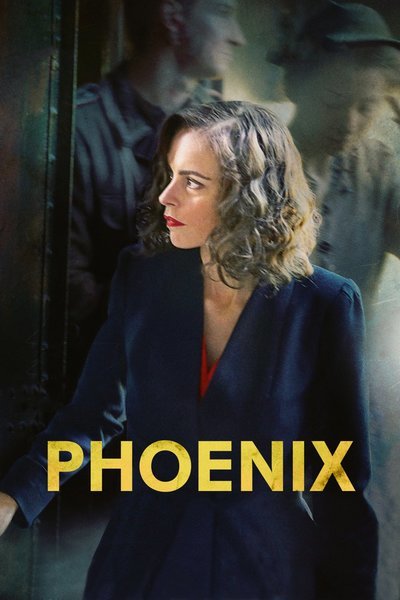 Rated PG-13 for some thematic elements and brief suggestive material