Sylvester Stallone is one of the great physical actors in the movies, with a gift for throwing himself so fearlessly into an action scene that we can't understand why somebody doesn't really get hurt. When he explodes near the beginning of “First Blood”, hurling cops aside and breaking out of a jail with his fists and speed, it's such a convincing demonstration of physical strength and agility that we never question the scene's implausibility. In fact, although almost all of “First Blood” is implausible, because it's Stallone on the screen, we'll buy it.

What we can't buy in this movie is the message. It's handled in too heavy-handed a way. Stallone plays a returned Vietnam veteran, a Green Beret skilled in the art of jungle survival and fighting, and after a small-town police force sadistically mishandles him, he declares war on the cops. All of this is set up in scenes of great physical power and strength and the central sections of the movie, with Stallone and the cops stalking each other through the forests of the Pacific Northwest, have a lot of authority. But then the movie comes down to a face-off between Stallone and his old Green Beret commander (Richard Crenna), and the screenplay gives Stallone a long, impassioned speech to deliver, a speech in which he cries out against the injustices done to him and against the hippies who demonstrated at the airport when he returned from the war, etc. This is all old, familiar material from a dozen other films clichés recycled as formula. Bruce Dern did it in “Coming Home” and William Devane in “Rolling Thunder”. Stallone is made to say things that would have much better been implied; Robert De Niro, in “Taxi Driver”, also plays a violent character who was obviously scarred by Vietnam, but the movie wisely never makes him talk about what happened to him. Some things are scarier and more emotionally moving when they're left unsaid.

So the ending doesn't work in “First Blood”. It doesn't necessarily work as action, either. By the end of the film, Stallone has taken on a whole town and has become a one-man army, laying siege to the police station and the hardware store and exploding the pumps at the gas station. This sort of spectacular conclusion has become so commonplace in action movies that I kind of wonder, sometimes, what it would be like to see one end with a whimper rather than a bang.

Until the last twenty or thirty minutes, however, “First Blood” is a very good movie, well-paced, and well-acted not only by Stallone (who invests an unlikely character with great authority) but also by Crenna and Brian Dennehy, as the police chief. The best scenes come as Stallone's on the run in the forest, using a hunting knife with a compass in the handle, and living off the land. At one point he's trapped on a cliffside by a police helicopter, and we really feel for this character who has been hunted down through no real fault of his own. We feel more deeply for him then, in fact, than we do later when he puts his grievances into words. Stallone creates the character and sells the situation with his presence itself. The screenplay should have stopped while it was ahead. 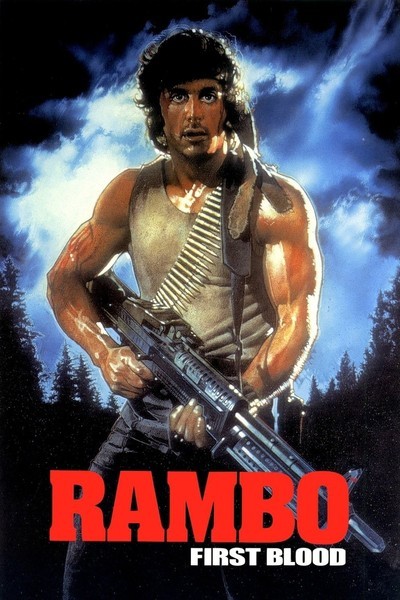