For most of its running time, David Leitch’s “Fast & Furious Presents: Hobbs & Shaw” delivers the goods one would expect from its ridiculous title. After all, what are audiences really here for? They want some banter between stars Jason Statham and Dwayne Johnson? Check. They want them to beat each other up a few times? Check. A physics-defying car chase or two would be nice? Check and check. It’s only in the final third when the fight choreography gets a little too incoherent that you realize you don’t give a damn about anything that’s happening, and you start to wish Hobbs and Shaw were given a story with a little more meat on its bones. But by then you probably won’t care.

With his work on “John Wick,” “Atomic Blonde,” and “Deadpool 2,” David Leitch has proven to be adept at highlighting the skill sets of action stars. He helped carve out the silent assassin within Keanu Reeves, the killing machine hidden inside Charlize Theron, and the wisecracking superhero that Ryan Reynolds was born to play. And so it makes perfect sense to give him this spin-off of the "Fast & Furious" mega-franchise. Working from a script by Chris Morgan and Drew Pearce, Leitch wastes no time leaning into the strengths of both Johnson and Statham, opening the film with a pair of intercut fight scenes that highlight what fans of the two love about them. It’s incredibly simplistic to have Johnson beat up a man with a tattoo needle and Statham get the job done with a champagne bottle, but there’s a sort of beauty in that simplicity. Ah, yes, these guys. I know these guys. I like these guys. Let’s kick some ass.

And, for a long time, “Hobbs and Shaw” lives up to those basic expectations. Somewhat surprisingly given how bloated some of the films in this franchise has become, Leitch and company keep it tight in terms of character and plot. There are really only two major new characters (plus a few cameos from familiar faces), played wonderfully by Idris Elba and Vanessa Kirby. The star of “The Wire” exudes physical menace as a self-described “Black Superman” named Brixton, an agent of an underground military-tech group called Eteon. He’s trying to get his hands on a virus that could wipe out the world in a matter of days, but MI6 agent Hattie Shaw (yes, it’s his sister), played by Kirby, gets to it first, and injects it into her own body. This means she’s a ticking clock of world-annihilating contagions that will go off in 72 hours. Hobbs and Shaw are the right men to stop that from happening.

There’s an almost metronomic approach to the first hour of “Hobbs and Shaw” that’s downright admirable in its no-fat execution. Fight, verbal spar, chase scene, fight, a little exposition, more insulting each other, etc. As with most great action movies, there’s a rhythm to it, and that pace is fine-tuned by the actors involved. Johnson and Statham became the most entertaining things about this franchise years ago, and they know how to lean into their on-screen personas perfectly. In a sense, it’s an old-fashioned ‘80s buddy comedy, but with modern technology and sensibilities. However, Leitch and company are smart enough to know that the routine between the two powerhouses would get stale for two hours and so they give them Elba and Kirby to switch up the energy. Elba matches the two leading men in the charisma department—a tough thing to do—and then Kirby nearly walks off with the movie. There’s an interesting piece to be written about how Hobbs and Shaw are constantly turning to women in this movie to save them—including Eiza Gonzalez’s Madame, a cameo from Helen Mirren as Shaw’s mom again, and a key character in the final act that I won’t spoil—but I admired how much Leitch and Kirby refused to turn Hattie into the damsel in distress character that she easily could have become.

Of course, what you really want to know is if things go boom in an entertaining fashion. And they mostly do, until the final act when some of the fight choreography—especially in two sequences with a lot of extras—gets a little sloppy. When he’s not slowing down to highlight a fist connecting with a jaw, Leitch has a habit of getting hyperactive with his shaky camerawork and editing. People love the “John Wick” movies because of the fluidity of the choreography, and I longed for a bit of that here, especially in the climax. The final act of “Hobbs and Shaw” also leans almost comically into the “family” theme of the series, and it’s both overplayed and underdeveloped, making for melodrama that's unearned. To be blunt, there’s no real emotional stakes in the final third of this movie, and I checked out more than I did in the best of the series (“Fast Five,” “Furious 7”).

I know what you’re saying. "Emotional stakes!?!?" In a franchise that has increasingly become science fiction more than action? It’s funny that they refer to Brixton as both Black Superman and The Terminator, showing how much the needle on this series has pushed into fantasy and sci-fi. But even the most superficially escapist entertainment needs to build to something, and the lackluster setting and spotty execution of the final big sequences here reminded me more of lesser “Fast & Furious” movies.

Most people won’t care. Heck, when I see this again at home, I may not care either. The truth is that the Summer of 2019 has been ridiculously thin when it comes to mindless fun. And there’s something to be said for merely bouncing four movie stars as charismatic as this film’s quartet off each other for just over two hours. As critics have said before about similar projects, it’s a movie to eat popcorn to and leave your worries at the door. While the rap on Hollywood is that they are now in the business of making product instead of movies, “Hobbs and Shaw” is one of the most fun shiny new products of the season. 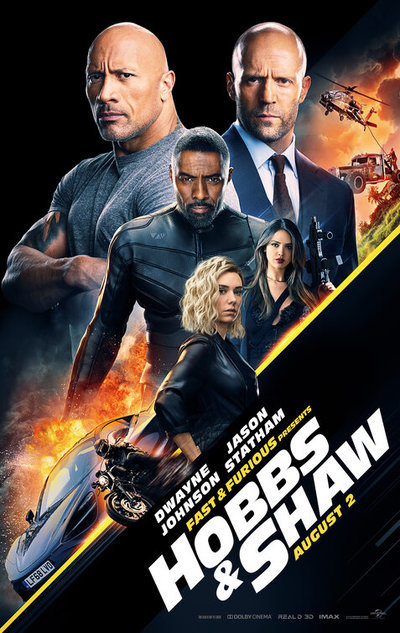