“Furious 7” is a glorious overcompensation, a film so concerned about its rampant machismo that the casual viewer might miss how it Tokyo-drifts atop soap opera bubbles. Like Lee Daniels' hit TV drama “Empire,” “Furious 7” is stuffed with situations that require go-for-broke absurdity, but even Daniels and his nighttime soap predecessor Aaron Spelling would pause before attempting the level of “get the f—k outta here!” style shenanigans director James Wan and writer Chris Morgan employ.

Standing atop this installment of the series is its own Cookie Lyon, Dominic Toretto (Vin Diesel). Like Cookie, played by Taraji P. Henson on “Empire”, Toretto will protect those he loves at any cost. He spends the entire film seeking revenge. Those unfamiliar with the franchise will be left to their own devices as to why. There’s no “last time on the Fast and the Furious” recap to get you up to speed, and one shouldn’t expect it from a movie with "7" in its title. Viewers of “Fast and Furious 6” will know that the Tokyo-set demise of Han (Sung Kang), one of the main characters, sets this new installment’s plot in motion. After a package mailed from Tokyo nearly blows Toretto and his comrade-in-arms Brian (Paul Walker) to smithereens, Toretto senses a connection and is immediately out for blood.

The bomb, and Han’s death, are courtesy of Deckard Shaw (Jason Statham), an Englishman whose first stateside order of business is to hack the computer of Luke Hobbs (Dwayne “The Rock” Johnson) to find Toretto and his cohorts. Hobbs has this information because—last time on "The Fast and the Furious"—Hobbs’ DSS agent practically blackmailed Toretto and company to help him take down a mercenary organization run by Deckard Shaw’s brother, Owen (Luke Evans). In exchange for succeeding at this job and killing Owen, Hobbs cleared the criminal records the Toretto Team acquired two movies ago. For having this information, Hobbs is severely injured by Deckard in one of “Furious 7”’s numerous fight sequences.

Toretto reassembles his crew, which includes Brian, IT guy Tej (Chris “Ludacris” Bridges), smooth-talker Roman (Tyrese) and Dominic’s partner, Letty (Michelle Rodriguez). Letty has amnesia because, previously on "The Fast and The Furious," she got blown up and was presumed dead. Though she has no memory of her former romantic life with Dominic, he holds out hope she’ll regain her memory.

The biggest catfights in the movie aren’t between Ronda Rousey and Michelle Rodriguez, they’re between the two men. Deckard somehow manages to appear wherever Toretto is, demanding retribution and throwing monkey wrenches into Toretto’s plans. The two constantly crash their cars into each other, then crawl out of the wreckage to brawl with pipes, fists and feet. It’s hilarious, as if Deckard has a tracking device on Toretto and is stalking him like a scorned lover.

Speaking of tracking devices, “Furious 7” not only has one, it’s the most powerful spy device in film history. Currently in the hands of Jakonde (Djimon Hounsou), it uses surveillance cameras, cell phones and other eyes in the sky to track anybody. Toretto’s team is “hired” to retrieve it so they can track Deckard, though as Toretto correctly notes, “I could just stand here and wait for him to find me.” If he had, old people like me wouldn’t be blessed with an appearance by Snake Plissken himself, Kurt Russell. Russell’s Mr. Nobody provides information and the use of the device should Toretto retrieve it. He's a classic Kurt Russell character, and as the Gershwins once queried, “who could ask for anything more?” He steals the film simply by putting on night vision sunglasses.

I haven’t scratched the surface of the plot. Not that it matters, though, as the film's primary concern is putting its viewers through an action-packed wringer. Wan, whose hyper camera tricks have annoyed me in movies like “Insidious”, “The Conjuring” and “Saw”, has finally found the right project to match his style. The fight sequences have the usual sped-up kinetics, but Wan frames them so they’re not hard to follow. The car scenes are equally proficient. And the film’s midsection, which piles action sequence upon action sequence, is the most riveting and exciting set piece I’ve seen in years. It pulses with adrenaline and a visual humor to match the comic camaraderie of its characters.

The actors, whose appearances span several entries in the series, have a character-driven, lived-in comfort with one another: They are all believable as the "family" Toretto refers to in that cheesy line from the commercial. This is an immensely entertaining movie, and if the filmmakers are wise, they’ll quit on this high note.

One final thing: “Furious 7” ends with a wonderful tribute to Paul Walker, the actor who was killed in a car accident in the middle of filming this movie. Before a montage of his appearances in the series, there’s a callback to the first film and some tender dialogue between Diesel and Walker. Wan’s camera then catches an overhead shot of a highway dividing. As Diesel narrates, we see the two leads’ cars go in different directions, like a visual representation of Robert Frost’s “The Road Not Taken.” Since Walker appeared in six of the seven films, he is the series’ equivalent of the North Star. Future installments will find that fixed mark of the Northern Hemisphere’s upward gaze missing from its sky. So this tribute is very emotional for fans of both the series and the actor, because it’s as if the fictional “Furious 7” knows that you know that Walker is gone.

And yet, I must admit there are moments in the film where this knowledge makes for uncomfortable viewing. Some of the more vicious car crashes and explosions are uneasy reminders, and while the film is careful not to evoke any parallels in scenes with Walker, his untimely death was never far from my mind. This is not a criticism; as I said, the tribute is wonderful, and the movie is a lot of fun. It's just an acknowledgment that I sometimes felt guilty for enjoying the car chases so much. Your mileage may vary. 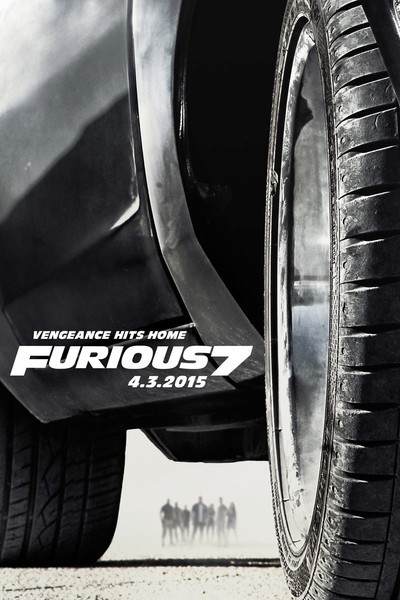