Dumb and Dumber To

I don’t know about you, but my head hurts from all these eccentric eggheads and arrogant geniuses monopolizing movie screens this fall. Isn’t science the last thing you want to muse about while munching popcorn laced with who-knows-what chemical agents in order to provide that noxious fake butter taste?

Most of these titles are the usual top-of-the-line Oscar bait that is to be expected at this time of year. Yet, Hollywood in its less-than-infinite wisdom has decided to bunch up all the brainy titles and bring them out within weeks of each other. “Interstellar” is steeped in perplexing wormholes, black holes and, yes, plot holes. “The Theory of Everything” manages to explain at least one wonder of the universe with nothing more than a box of Tide detergent. With its animated squad of tech-savvy titans, “Big Hero 6” is practically Disney-fied nerd porn. “The Imitation Game” reveals that crossword puzzle addicts, chess champs and brilliant mathematicians were the secret heroes of World War II.

But just when I’ve had my fill of films that make me feel intellectually inferior, along comes the directing and writing team of Peter and Bobby Farrelly with the much-delayed sequel to their hit debut, “Dumb and Dumber To.”

You don’t have to wait much to be reminded of what you are in for. The first collective “Ewww!” is uttered by the audience within minutes. That the slapstick segment ends with a painful attempt to yank out a catheter, which causes those watching to alternate between groans and guffaws, shows that the boys still can get a rise out of a crowd.

Is it a great movie? Only if you define great as the number of times one of the leads is shown having his adult diapers changed baby-style by the other lead (in this case, numerous). Is it a good movie? Only if you think the sight of a cat high on meth wildly swinging from a chandelier in the background is hilarious. Is it an occasionally insulting and out-of-touch movie? Only if you think racist jokes aimed at Mexicans, Asians and even Canadians or ugly sexist taunts directed at a woman of a certain age who happens to be Kathleen Turner are offensive.

Still, I laughed—enough to feel mortified at myself. I confess I did chuckle heartily at the sign that read “The Barbara Hershey Highway.” That means I am human. It also means that “Dumb and Dumber To” is, at the very least, an occasionally funny movie.

It has been 20 long years since the brothers staked their claim as gross-out comedy kings with the original “Dumb and Dumber.” But, as anyone who watches cable news shows or reality series knows, the world has yet to tire of observing nincompoops. Besides, what says happy holidays more than a crude buddy romp with a cornucopia of bathroom humor and gags involving a smorgasbord of bodily fluids? Most telling: What used to be R is now quaintly PG-13.

Not that the sibling sultans of stupidity have improved much as artists. The Farrellys have always lacked any sort of visual flair save for their love of butt shots. Their films often look a little grimy and in need of a good squeegeeing, as do many of their characters. And the storylines feel like extended Three Stooges shorts—so much so that their last movie was their version of three strung-together Curly, Larry and Moe episodes.

These stupidity specialists are at least smart enough to do some things right. The brothers managed to reunite the original stars, Jim Carrey and Jeff Daniels, as they reprise their roles as Lloyd Christmas (his surname begets this absurd exchange: “As in the holiday?” “No,” says Lloyd, “as in the tree.”) and Harry Dunne. You can sense how hungry Carrey is to sink his chipped front tooth (the real one he also exposed in the original) into this odiferous brand of lowbrow high jinks one more time.

Since his peers are determined not to allow him to ever compete for an acting Oscar—the fact he was overlooked for 2004’s “Eternal Sunshine of the Spotless Mind” remains unforgivable—he might as well grab the cash opportunities when he can.

With his third season playing an imperious TV anchor on HBO’s “The Newsroom,” Daniels has less of a reason to engage in such moronic antics again. But man does not live by scintillating Aaron Sorkin dialogue alone. Sometimes you just want to yell: “Show us your tits.”

The Farrellys also rightly ignore any references to the ill-conceived 2003 prequel, “Dumb and Dumberer: When Harry Met Lloyd.” That featured the only actors less famous than those guys who briefly filled in for Tom Wopat and John Schneider while they were engaged in a contract dispute on TV’s “The Dukes of Hazzard.”

Oh, there is a plot. Harry, who needs a new kidney in a hurry, suddenly learns he has a grown daughter named Penny who might be a possible donor. He and Lloyd, as before, hit the road in ridiculous vehicles including a hearse and a Zamboni machine to find her in Maryland, where she lives with her wealthy adoptive father.

And, oops, he is an esteemed Nobel-winning scientist. Yes, even the Farrellys are on board with the trend. Except he is secretly being poisoned by his gold-digging cheat of a second wife (“The Walking Dead"'s Laurie Holden) and the family handyman (Rob Riggle, up to the task of being a straight man). Everyone ends up in El Paso at a convention that mocks Mensa’s answer to Comic-Con, those pretentious TED conferences.

At this point, I have to mention a reference that will be of interest to fans of RogerEbert.com. The blind kid in a wheelchair from the first movie, Billy from 4C, is back and has a movie-dialogue-squawking parrot named Siskel, apparently in honor of critic Gene Siskel. The Farrellys were always thankful for Siskel and Ebert’s support of their films, and even dedicated 2000’s “Me, Myself & Irene” to Siskel after he died the year before.

Bottom line: For every joke that works, there are five that fall flat and one that elicits waves of disgust. You might be able to handle that ratio, however, just to hear absurd discussions like this one between Penny and Lloyd. “I’ve always wanted to go to India and work in a leprechaun colony,” Penny says. Counters Lloyd, after digesting the statement: “I think you mean Ireland.” 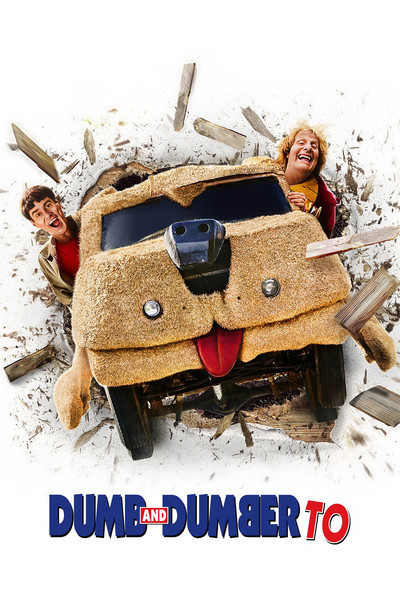