Six years after his critically derided third feature “Chappie,” Neill Blomkamp has finally returned to the scene with “Demonic,” a sci-fi/horror film that he made in the middle of the pandemic, limiting his resources in a way that could have sparked his creative potential (as I would argue happened with Ben Wheatley and his best film in years, "In the Earth"). It did not. Sadly, “Demonic” feels like a film made by someone who’s scared of his own ideas and his own limitations. Everything here, from the filmmaking to the screenwriting to the acting feels hesitant, as if the broad swings of “Chappie” (and really “Elysium” and “District 9” too) have been replaced by trepidation. It’s a film unconvinced of its own ideas and uncertain of its own potential. Give me a film that aims big and fails, as Blomkamp arguably did with “Chappie,” over one that feels so derivative and flat as to be forgotten minutes after it’s over.

After a creepy dream involving her mother Angela (Nathalie Boltt) foreshadows the film, Carly (Carly Pope) is contacted by an old ally named Martin (Chris William Martin). He knows that Angela and Carly have been estranged for years, the daughter having left her mother behind after a series of violent, murderous actions that can’t really be forgiven. Martin claims to have seen Angela at a hospital, where she lays in a coma. Angela goes to investigate, and discovers that two men (Michael J. Rogers, Terry Chen) have a vested interest in Angela and Carly. They have devised a way for people to enter the dreamscape of coma patients, and they want Carly to go in and “talk” to her mother. She will, of course, learn that she’s not alone in there.

Blending “Assassin’s Creed” with “The Exorcist,” a lot of “Demonic” takes place in what looks like a virtual world, the one in which Carly first confronts her mother and then realizes perhaps she needs saving. It’s a oddly-rendered motion-capture aesthetic that drains scenes of humanity, enhancing a cold distancing effect that infects the live-action scenes as well. “Demonic” is an oddly inert film for a filmmaker who has shown such passion in the past, in part because Ms. Pope has been so poorly directed as to never seem quite clear what emotion she should be conveying (so she often goes with none). It is a non-performance, a black hole in the middle of “Demonic” that sucks in everything potentially interesting around it.

And there are potentially interesting ideas in blending “Dreamscape” with a story of possession. How the Vatican and other religious powers use technology to battle ancient evil has been the subject of interesting fiction in recent years (it’s a main thrust of the far superior TV series “Evil” too), but Blomkamp never invests his themes with any passion or creativity. “Demonic” is an incredibly cold film, and not just when it comes to on-camera issues like flat performances and dull dialogue, but in the filmmaking too. Perhaps the pandemic scared him away from his artistic instincts. Perhaps the reviews for “Chappie” did the same. Whatever is keeping Neill Blomkamp so reserved that he delivered a film as dispiritingly rote as “Demonic”—that’s what needs an exorcism. 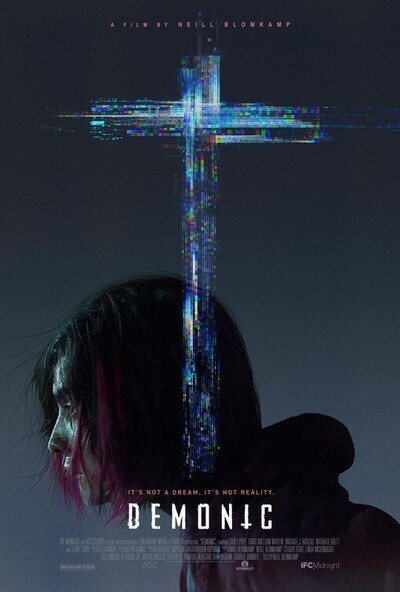 Rated R for language, some violence and bloody images.