In a summer of antiseptic effects spectacles, "Elysium" stands out for its grime and intensity, as well as the bluntness of its class allegory. The movie won't win many points for originality or logic. But when the blockbuster competition wants only new ways to repackage Wolverine and Superman, it's weirdly refreshing to watch a film that seeks new ways to repackage "Mad Max," "Blade Runner," "Robocop," and elements from Kathryn Bigelow and David Cronenberg.

The film is set in 2154, when the planet has been ravaged by disease, pollution, and overpopulation. The wealthiest now live on a space station called Elysium, which can be seen in the clouds from Earth below. Max (Matt Damon) has grown up watching Elysium from his rundown, largely Latino L.A. neighborhood. A reformed car thief now working in a grueling factory job—he's lucky to have it, he's sneeringly informed—Max is trying to keep things together in a society openly rigged against the poor.

It's not easy. Amid a gritty cityscape filled with cluttered streets and dirty, crowded hospitals, a robot police force makes arrests indiscriminately, with no apparent restraints on brutality. Sentencing is automated, administered by a droid whose voice has the kind of crackle you hear when ordering at a drive-thru. No sooner is Max done with his latest legal entanglement than a radiation accident at the plant leaves him with only days to live. He's done for—unless he can get to Elysium, where healing pods fix all medical problems in seconds.

On this space "habitat," we follow the defense secretary (Jodie Foster), who offers a vigorous defense of her right to use unlimited force to benefit the liberty of a few. In a not-so-subtle commentary on the immigration debate, she shoots down refugees who try to land. She's also plotting a coup with the help of a wormy CEO (William Fichtner) on Earth. Max's attempt to track down the latter man and download information from his brain—echoes of "Strange Days"—makes for one of the film's most excitingly absurd sequences, as the hero and his former auto-thief partner (Diego Luna) intercept this bigwig's crashing private jet.

Drawing on an international cast, "Elysium" is rich with topical allusions. Writer-director Neill Blomkamp's "District 9" (2009) was a naked Apartheid allegory, and there's a continuation of that thread here. (It's surely no accident that Foster character, while variously parroting Cheney and Goldwater, speaks with a South African accent.) "Elysium" also nods to the healthcare fight and the growing income gap, so it's a disappointment that the film ultimately doesn't have much cogent to say—beyond having a child make the observation that helping people is a good way to make friends.

Still, although it lacks the full conceptual punch of "District 9," "Elysium" is less erratic as filmmaking. (There's no mock-documentary conceit to abandon this time.) For a villain, it offers not only Foster's character, but Sharlto Copley as her vicious felon henchman, as volatile and cruel a presence as we've seen on screen in some time. When he interrogates Max's childhood friend, now a nurse (Alice Braga) with a daughter (Emma Tremblay) dying of leukemia, he momentarily feigns sympathy: "I don't believe in committing violent acts in front of kids," he taunts, leaving viewers bracing for the worst.

"Elysium" is involving enough that it's tempting to forgive its numerous logical flaws, but much of what happens doesn't stand up to scrutiny. Let's start with the medical pods. The film is vague about how numerous they are, and their healing powers barely stop short of resurrection. That seems less like a plausible vision of the future and more like a screenwriter's contrivance for keeping favorite characters alive.

And while it's noble for Max and black-market dealer Spider (Wagner Moura) to want to grant Elysian citizenship and healthcare to every person on Earth, the movie makes no attempt to address the scarcity issue that's allegedly given rise to this dystopia in the first place. By limiting the Earth-bound action to Los Angeles, the film leaves questions dangling about the rest of the world while at the same time squandering an opportunity for imagination.

Class disparity is one of the oldest archetypes in sci-fi movies, dating from "Metropolis" at least, and idea-wise, "Elysium" doesn't hold its own even by recent standards of the subgenre. (Check out on Andrew Niccol's underrated "In Time," in which the haves and have-nots use the minutes they have to live as currency.) But as a vehicle for putting Matt Damon in a bionic getup on a messianic action quest, "Elysium" has enough grist to power through. 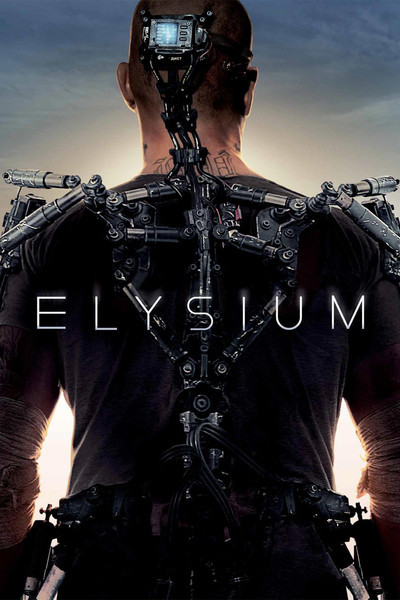