While out promoting his latest film, "Chappie," filmmaker Neill Blomkamp, who achieved great critical and commercial success with his 2009 debut "District 9," has made a couple of announcements that have attracted much attention from the fanboy set: his next project will be a new entry in the venerable "Alien" franchise and he has admitted that he feels that he messed up with his previous film, the hugely disappointing sci-fi allegory "Elysium". Based on this, I can only assume that when he hits the junket circuit in a couple of years to hype his "Alien" film, he will spend part of his time apologizing for "Chappie" as well because its failures are so pronounced that they make the artistic sins of "Elysium" seem minor by comparison.

According to the faux-news reports that open the film, the police force in near-future Johannesburg, South Africa has been replaced with human-sized and heavily-armed robots that, while not indestructible, are powerful enough to have inspired a steep drop in the crime rate. For Tetra Vaal, the defense firm charged with supplying the robots, business is booming and other countries are set to place orders as well. However, Deon (Dev Patel), the brilliant designer who created the robot cops, is somewhat disenchanted and wants to make a more meaningful contribution to society. To that end, it appears that he has stumbled upon a way of endowing machines with true artificial intelligence so that they can learn, create and feel just like actual humans. This does not go over particularly well with his boss (Sigourney Weaver) and so, using the remains of bombed-out bot Scout 22, he decides to conduct some off-base experiments, arousing the suspicions of nasty office rival Vincent (Hugh Jackman), whose own prototype for a crime-fighting robot has been shunted aside, partly because of the success of Deon's creation and partly because his creation looks like the ED-209 sans the gazelle-like grace and is controlled by a virtual-reality helmet that makes the user look like a participant in "VR.5" cosplay.

Alas, while leaving the office, Deon is kidnapped by a trio of low-level thugs—Ninja (Ninja), Yo-Landi (Yo-Landi Visser) and Amerika (Jose Pablo Cantillo)—who are convinced that he has the ability to switch off all the robot cops so that they can commit a $20 million heist in order to repay a pressing debt to a violent local drug lord. Deon cannot do that but when they discover that he has a robot with him, they demand that he get it running so that they can use it for their own purposes. Deon successfully installs his AI program and revives the robot, now dubbed Chappie (and performed by Blomkamp regular Sharlto Copley) and coming across like a big metallic child that inspires some unexpectedly maternal feelings from Yo-Landi. While she and Deon try to instill the blank slate that is Chappie with all the right things—intelligence, kindness, an artistic temperament and the ability to know right from wrong—the harsher Ninja and Amerika show him the darker side of humanity in the hopes of getting him to help with their heist plans. About this time, Vincent gets wind of Chappie's existence and sets in motion a plan to neutralize the robot cops and plunge the city into chaos, a move that will eliminate his rival and force the company to let him deploy his creation to save the day. Spoiler alert: his plan proves to be as ungainly as his creation and while Johannesburg is going up in flames, Chappie's increasing developed soul is torn between the lofty ideals of his creator or the baser instincts inspired by the real world.

Although I wasn't quite as over the moon in regards to "District 9" as some people, it was nevertheless an ambitious work that combined genre thrills with a thoughtful allegory about the horrors of apartheid. "Elysium" was another attempt at a science-fiction allegory, this time about the importance of universal health care, but did so in such a absurdly heavy-handed manner that even the most ardent supporters of the ACA found it to be a tedious slog. Presumably in response to the rejection of that film, Blomkamp and co-writer Terri Tatchell (his wife and collaborator on "District 9"), have largely eschewed any grand political subtext this time around but have neglected to bring in anything new or interesting as a replacement. The basic questions posed here—can a machine somehow develop consciousness and, if so, what does that mean for humanity—are ones that have been explored in any number of films over the years, and "Chappie" brings nothing new to the table in this regard and eventually abandons all of its philosophical musings for a series of noisy but largely anonymous action set-pieces.

One of the biggest problems with the film is that Chappie himself is pretty much a tool, both literally and figuratively. The screen has seen any number of robot creations that has managed to demonstrate remarkably human characteristics—HAL 9000, WALL*E and Samantha from "Her" immediately leap to mind—but Chappie, despite the best efforts by Blomkamp to humanize him (such as slapping a "REJECT" sticker on its forehead), is almost stunningly unappealing. He may be like a child, but, if so, he is the kind of child who seems to be in desperate need of Ritalin. He isn't very interesting from a design perspective, his motor-mouthed (no pun intended) approach to everything quickly grows grating, and, after a while, he is so unlikable that it is impossible to give a whit about his transformation and what it means for us all.

Then again, the screenplay hasn't exactly imbued its flesh-and-blood characters with recognizable human qualities as well. As Chappie's creator, Patel is just meh, and it is always nice to see Sigourney Weaver in a genre film, but her appearance here is far too brief and her character is written as too much of a dope to be believable as the CEO of anything. In a weird casting move, Ninja and Yo-Landi Visser, who in real life are members of the punk-rap-rave band Die Antwoord, are on hand to more or less play themselves (at least in the sense that the Beatles played themselves in "Help") but whatever power they may display on the stage does not transfer to film because they are as stridently annoying as Chappie. Then there is poor Hugh Jackman, who is stuck playing the film's most poorly conceived character, a former soldier who hates Deon and his creations, believes that man should always be placed far above robots and is willing to destroy an entire city in order to get his way. The trouble with Vincent is that even though he is the villain of the piece, his concerns over giving robots the ability to think for themselves is actually kind of valid and a more honest film would have admitted it. Instead, the screenplay nullifies this by making him into a cartoonish ogre, and to make sure we know that he is the bad guy, he totes a gun, wears a mullet and is overtly religious to boot.

"Chappie" is such a misconceived work from a once-celebrated science-fiction visionary that I think that all the people who were lambasting the Wachowskis a few weeks ago over "Jupiter Ascending" now owe them an apology—whatever that film's sins, it was nevertheless a hugely ambitious attempt to create an original fantasy epic not based on a video game or comic book that I thought worked more often than not. "Chappie," by comparison, is an exhausting slog through overly familiar cliches that is nowhere near as profound or touching as it clearly thinks it is and is utterly lacking in the kind of intelligence and artistry that it so often pays lip service to in the dialogue. At one point, an anguished Chappie screams out "Why do you humans do this?"—while he is theoretically commenting on the inhumanity of man at this point, I couldn't help but think of it as his plaintive comment on the film as a whole. 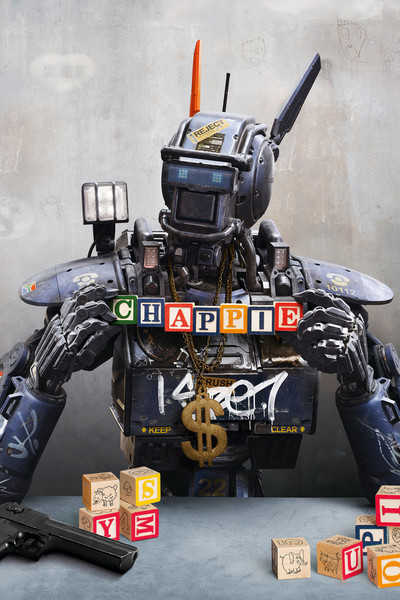