"In the Earth" is a film made for midnight showings. It's ominous, brutal, pretentious, and often stirring. Even though some sections feel rushed and it falls apart at the end, every part of it is memorable. Set mostly in gloomy fairy-tale woodlands, where representatives of science are terrorized by forces both human and uncanny, this is a low-budget thriller that carries itself with the swagger of a larger production. Writer/director Ben Wheatley combines science fiction, horror, and the supernatural, with nods to milestones in cinema style, particularly Stanley Kubrick's "2001: A Space Odyssey" and "The Shining." But the unifying inspiration appears to be that of a grungy, icky 1970s horror flick—the kind that doubles as an endurance test—a film like "The Texas Chain Saw Massacre," "The Last House on the Left," and "Halloween" that viewers leave feeling exhilarated or brutalized, depending on their tolerance for cinema of extremes.

Dr. Martin Lowery (Joel Fry), who has been isolated during a pandemic and craves human contact, goes into the woods with park ranger Alma (Ellora Torchia) to locate his colleague Dr. Olivia Wendle (Hayley Squires), who shares an undiscussed, deep bond with Martin, and has been unreachable since switching off her radio. Olivia's work is meant to improve crop growth efficiency. She is convinced that all plant life is interconnected through a sort of psychic neural network and can talk amongst itself, and to us.

The mission goes bad immediately. Alma and Martin are brutalized and knocked unconscious in the woods soon after their arrival, with Martin suffering a foot wound that will get worse and more disgusting as the story unfolds. Much of the film is a hostage drama, with the duo falling into the clutches of a creepy loner named Zach (Reece Shearsmith), who brutalizes them with the aplomb of Leatherface's family or Jigsaw from the "Saw" movies. When the movie brings Olivia into the story, following a protracted, almost Kurtz-like buildup, she turns out to be as unsettling as Zach. You can tell by Squires' unnerving line delivery and facial expressions (somehow, she's both droll and menacing) that in her own way, Olivia is just as unhinged.

Without disclosing specifics, let's call this one a wilderness survival drama, with elements of slasher and body horror cinema and undercurrents of pre-Christian mythology and ooga-booga bedtime stories. The first act feels a bit like a European arthouse cinema head-scratcher that aims to ponder the fate of humanity in the age of extinction-level threats (most of them being our own collective fault) but that makes sure to throw ultra-violence and gnomic mysticism into the mix, as an audience engagement insurance policy. It's as if Wheatley had seen Andrei Tarkovsky's "Stalker" (one of the great lost-in-the-magic-woods movies, as well as a towering work of philosophy and ethics) and thought, "This film would be even better if it had an actual stalker in it." And so the fragility of flesh takes center-screen and we're treated to many closeups of bleeding, torn, mangled body parts. The visuals are obsessed with openings and orifices and eye-like shapes, many discovered in woodland panoramas, others created within the landscape of the body itself.

We're also warned from the start that Olivia's work focuses on the uncommonly fertile soil in the forest, so we prime ourselves for the possibility that we're going to get invasive fungus action (the hero even tells us that he had ringworm recently). The film delivers on this promise, though not in the way you might expect. One character rephrases the famous observation that, to members of primitive civilizations, high technology is indistinguishable from magic.

From that point on, "In the Earth" conflates modern scientific research and theory with ancient rituals meant to communicate with (and appease) Parnag Fegg, an ancient eldritch force that may have summoned all the humans to the woods in the first place. There's a touch of John Carpenter's "Prince of Darkness" in the script's exposition-heavy lore, which postulates that science might eventually find a way to perfect the approximations of scripture, ritual, and spell-casting.

All of this stuff connects rather glancingly, or vaguely. For the most part, that's good cinema praxis (better to leave the audience guessing or a bit confused than explain every little thing to death), but still there are times when it seems as if Wheatley is fudging things, like a magician who asks "Is this your card?" and then takes it away just fast enough that you can't be sure. Razzle-dazzle flash-cuts, disorienting jump cuts, and incessant strobe effects amplify dread and confusion in the film's most intense scenes. There's a lot of screaming and crying and lot of pain, and it would all be unbearable if Wheatley didn't exhibit such mordant wit. He's constantly setting up scenes where you know exactly which horrible thing might happen to one of the characters, then making you wait for it, and wait for it, through false starts, digressions, and clumsy mistakes that require a do-over. And when it finally does happen: wow.

Where the film fails as a substantive statement about this or that or the other thing, it succeeds as a visceral exercise in audience torment. Throughout, Wheatley observes a horror movie version of Chekhov’s principle, where you can assume that the rifle hanging on the wall of a set isn't just there for atmosphere. This movie features Chekhov’s Hatchet, Chekhov’s Bow and Arrow, Chekhov’s Fungus, and Chekhov’s Guitar (used to lull characters to sleep through repetitive phrases that hit them like incantations). Like another low-budget 2021 film, "Lapsis," it uses nature's splendors to give a small movie an epic feeling, and its skill at making you squirm suggests that, for all its poker-faced wonderment over the machinations of the universe, Wheatley identifies most strongly with Zach, a grandiloquent sadist who has a captive audience where he wants them and revels in that fact. After a certain point, I stopped finding the ostentatious, close-up brutality funny and started howling at it, and my experiences with some of Wheatley's other movies (particuarly "Kill List" and "Free Fire") confirm that not only is he OK with that sort of reaction, he thrives on it.

Special citations are due to cinematographer Nick Gillespie, whose widescreen images use expressionist  primary colors (particularly verdant green and purgatorial red) and put fog and flame to brilliant use; and to Clint Mansell's synthesized score—one of the best he's ever done, and so clearly indebted to director-composer John Carpenter's scores for his own films that when you see the soft-spoken lunatic Zach trudging across fern-carpeted earth, his long, greying locks swaying around his face, it momentarily seems as if the characters are being pursued by John Carpenter himself.

Bring Your Own Brigade 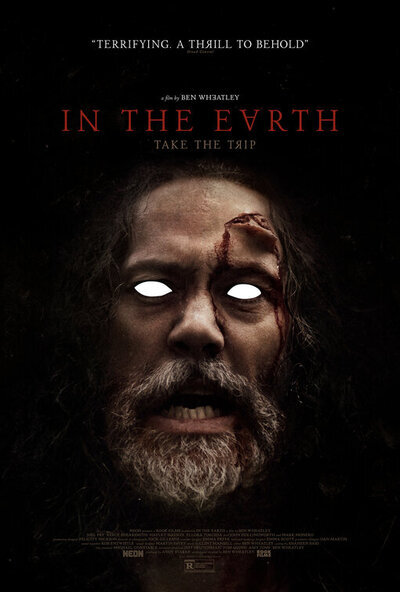