“Criminal” is the kind of dunderheaded enterprise that leaves viewers reeling from the idiocies they have just endured, wondering how something like that could possibly get made in the first place. Although I have absolutely no proof that any of this is true, I do have a wild speculation regarding how it come into existence. My theory is that 25 years ago, during a break towards the end of production on Oliver Stone’s controversial epic “JFK,” co-stars Kevin Costner, Gary Oldman and Tommy Lee Jones got together to remark about what a calm and easygoing set it was and how they should all get together again someday. Eventually a pact was formed—a quarter century from then, they would have a reunion that would involve one of two things. If all three of them had won an Oscar by that time they would spend a relaxing week or so hanging out and reminiscing about old times. However, if even one of them was still Oscar-free by then, they would instead pledge to find the dumbest and sorriest excuse for an action movie available and waste their time and talents on it instead. I admit, this may not be the most plausible scenario imaginable—especially the part about Oldman still not having an Oscar—but it makes a hell of a lot more sense than this film and is frankly more entertaining to boot, which should give you some indication as to how rotten it really is.

As the film opens, hunky London-based CIA agent Bill Pope (Ryan Reynolds) has just stashed away Dutch hacker Jan "The Dutchman" Stroop (Michael Pitt), as part of an agreement to get him $10 million and a new identity, in exchange for a wormhole program that could cause untold death and destruction in the wrong hands. Pope is ambushed by the minions of Hagbardaka Heimbahl (Jordi Molla), a crazed Spanish businessman-turned-anarchist who has already vowed to bring bloody revolution to the world. Pope is killed, but for bureau chief Quaker Wells (Gary Oldman), that is not an insurmountable problem. After keeping his neurons firing artificially, Wells calls in Dr. Franks (Tommy Lee Jones), a brilliant neurosurgeon who has luckily been developing a procedure to transfer memories from one brain to another. As it turns out, the only person that Dr. Franks is willing to do the procedure on is Jericho Stewart (Kevin Costner), an imprisoned sociopath whose childhood injury to the frontal lobes left him incapable of feeling any kind of emotion or empathy but happily left him the perfect lab rat for the experiment.

When Jericho fails to recall the crucial information about the whereabouts of The Dutchman—who by now is making moves to sell his program to the Russians—a mere ten seconds after waking up from experimental brain surgery, Wells orders him killed. But after he manages a violent escape and makes it back to London, he then begins demonstrating odd flashes of Pope’s skill set and memories that range from the usual spy stuff to being able to speak French to that time he rented “Double Jeopardy.” More significantly, the operation seems to be allowing him to feel emotions for the first time—when he breaks into the Pope house and seems prepared to do horrible things to his widow (Gal Gadot) and their adorable daughter (Lara Decaro), he only robs them instead of murdering them in their beds. Informed by Dr. Franks that he will only be able to tap into Pope’s memories and emotions for another three days or so (sadly, Dr. Franks doesn't get a chance to say “Well Jericho, we always knew this day would come), Jericho decides to try to figure out where The Dutchman is and protect Pope’s wife and kid, while at the same time eluding both the CIA and Heimbahl’s army of largely moronic minions.

At this point, many of you are probably thinking that “Criminal” sounds like the most absurd film concept imaginable—a lunatic blend of “Flowers for Algernon,” “Seconds” and any of the various movies involving Ryan Reynolds and experimental procedures that allow him to once again contact a significant other while hordes of trained killers try to wipe him out. The film is ridiculous but personally, I have no problem with goofball action extravaganzas as long as they are presented with the right amount of style and wit. Take the oeuvre of Luc Besson, for example. Films like “Nikita,” “Leon” and “Lucy” have utterly absurd premises but he relishes those absurdities, presenting them in such a cheerfully nutty manner while at the same time deploying his astonishing skill for staging action set pieces that you can’t help but be entertained by them—they may be eye candy but they are definitely of the gourmet variety.

Although “Criminal” borrows any number of pages from the Besson playbook, ranging from the European locales to the main actors to the dialogue that occasionally sounds like it went through the Babelfish translator one time too many, director Ariel Vromen (whose previous works have included the indie efforts “Danika” and “The Iceman”) never manages to find the right handle for the material. His staging of the action beats, though bloodier than perhaps expected, is perfunctory at best and only rarely reaches those heights. Dramatic moments also fail largely because we are never at any time invested in Jericho’s transformation nor his reunion with his family. He also fails to make any lucid sense of the screenplay by Douglas Cook and David Weisberg—if you can explain why Heimbahl wants to destroy the world or why The Dutchman is suddenly eager to sell to the Russians and offer a potentially disastrous demonstration of his abilities to boot, you are one up on me, or you have had the memories of Cook and/or Weisberg jammed in your skulls.

As previously noted, “Criminal” has an unusually strong cast for a film that might have otherwise gone the VOD route, but even they don't help. Despite his eternal nice guy image, Costner has done an excellent job playing psychopaths in the past in such films as “A Perfect World” and the criminally underrated “Mr. Brooks,” but this ranks as one of his worst performances to date. In lieu of creating a convincing character, he spends the entire film talking in a grunt that suggests a mediocre Nick Nolte impression. For their parts, Oldman and Jones respond to their thinly delineated characters in their usual ways—the former chews as much of the scenery as he can without causing massive structural damage while the latter is so stiff and undemonstrative that he seems to be doing every single scene under duress. As Bill's wife, Gal Gadot is striking enough but has even less to do here than she did in that “Batman v Superman: Dawn of Justice” boondoggle. Despite what the ads suggest, Ryan Reynolds is only in it for a few minutes and spends part of that time getting tortured at length with an electric cattle prod.

And yet, with the combination of big stars and plenty of explosions, I am sure there are probably some people thinking that I am just being too fussy over a simple “popcorn film” (an expression that I loathe), one that exists only to provide mindless entertainment and nothing else. How can I possibly convince them that they would be better served choosing the likes of “Everybody Wants Some!!,” “Midnight Special” or “Green Room”? While checking out the trivia section for “Criminal,” I came upon this simple but astonishing fact: “Nicolas Cage turned down a lead role.” Considering the films that the weirdly indiscriminate Cage is perfectly willing to sign on to do, the fact that this was somehow beneath him should pretty much say it all. 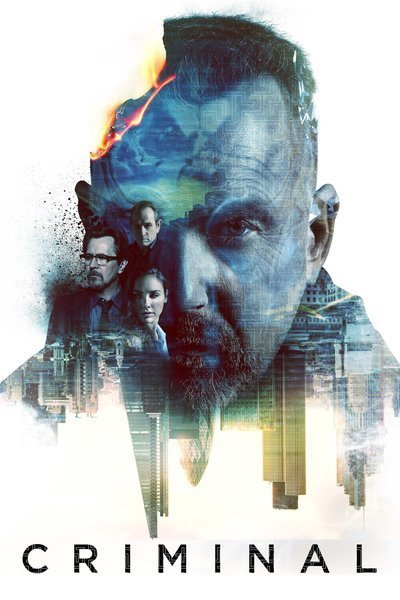