How far would you go to protect your child? What if saving him meant letting him go? Jeff Nichols’ brilliant “Midnight Special” weaves relatable themes of parental responsibility and faith in that which is traditionally unexplainable into a sci-fi road movie, with echoes of John Carpenter, Steven Spielberg, and Stephen King bouncing throughout. So many modern blockbusters err on the side of hand-holding, underlining their plots and character motivations with consistent expository dialogue or overly defined narration. There’s this bizarre concern by Hollywood that audiences will rebel if they don’t fully understand what’s going on at every given moment, and so characters talk to themselves, motivations are spelled out in voiceover, and everyone, especially in action movies, speaks of what they have to do and why they have to do it. “Midnight Special” respects your intelligence, letting you come to its themes emotionally instead of narratively. It is a breathtaking display of visual storytelling, confidently rendered by someone who understands the power of cinema.

Nichols, who also wrote the film, plunges us into the action of the piece immediately. Two men—Roy (Michael Shannon, who has appeared in every Nichols film) and Lucas (Joel Edgerton)—are in a motel room, watching a news story about a manhunt involving a kidnapped boy. The boy is in between the two beds in the room, reading comic books with a flashlight. His name is Alton (Jaeden Lieberher), and he’s special. He’s so special that an entire religious sect has sprouted up around him, led by Calvin Meyer (Sam Shepard). As Roy and Lucas flee into the night with Alton in the backseat and wearing night vision goggles so they can turn off their headlights to make themselves harder to spot, Calvin’s compound is raided. It turns out everyone is looking for Alton.

The FBI brings in a specialist to meet with Calvin’s flock named Paul Sevier (Adam Driver), trying to figure what they know about the boy and exactly what this golden child means to them. It turns out that the cult of Alton worships numeric sequences that the potential prophet has been revealing to them. It also turns out that these numeric sequences mean something to the government, and they want to know how a child knew them. Finally, the numbers seem to be pointing Alton, Roy and Lucas to a specific location. Lucas is one of the recently converted—through a special power that Alton has to convey something transcendent through beams that shoot from his eye—but Roy's devotion is purely parental. Both men need to get Alton there in time; nothing will stop them.

The drive of Roy, Alton’s father, is made clear in an early scene in which the trio encounters a state trooper. He sees their license plate and looks like he’s about to call it in when Roy and Lucas draw on him. Is their mission important enough to kill a cop? Roy’s drive to do what he thinks he needs to be done for his son is motivated by the passion of fatherhood, but is Lucas’ purpose as committed? And how will Alton’s mother, played by Kirsten Dunst, respond? “Midnight Special” is masterful in the way it keeps answering questions and then asking new ones, always staying one step ahead of the viewer. It’s a testament to Nichols’ direction that we trust that we are in the hands of a master, willing to take the journey wherever it may lead us.

And the final destination for that journey, while I would never spoil it, is surprisingly emotionally resonant. Alton being “special” could easily be read as an allegory for a sick child, one who is not like the others and needs a different kind of care and attention; one who is special in a way that only parents who have dealt with that kind of pain and loss could understand. There is also an undeniable story of faith buried in “Midnight Special”—about believing in something unseen, something greater than ourselves. Much of this emotional undercurrent falls on the shoulders of Nichols’ cast, especially the driven, subtle performance from Michael Shannon, although he’s matched by great work from Dunst, Edgerton, Driver, and the rest of the cast.

“Midnight Special” also relies on essential contributions from cinematographer Adam Stone (who has worked with Nichols on all of his films) and composer David Wingo. Stone captures the natural world almost as another character (as he did in “Take Shelter” and “Mud”) and makes a work of art out of a sequence that hinges on a sunrise. Nichols and Stone's compositions are completed by Wingo’s score, which often drives us to the film’s emotions as it goes daringly dialogue-free for large chunks of the action.

In the end, that’s what I take away from “Midnight Special”—the power of visual storytelling. It is images from the film that pass through my mind most—flames falling from the sky, a father carrying his child, the shaking of grass as something is about to happen, and the jaw-dropping finale. Nichols is the rare filmmaker who understands that this is what we take away from the best films, and the powerful way that art reflects that which transcends words: a father's dedication, the pain of a sick child, belief in something greater than ourselves. Sure, we quote our favorite lines and do impressions of characters, but it is the pictures that haunt us, that linger in our mind, and that stay with us. Sometimes forever. 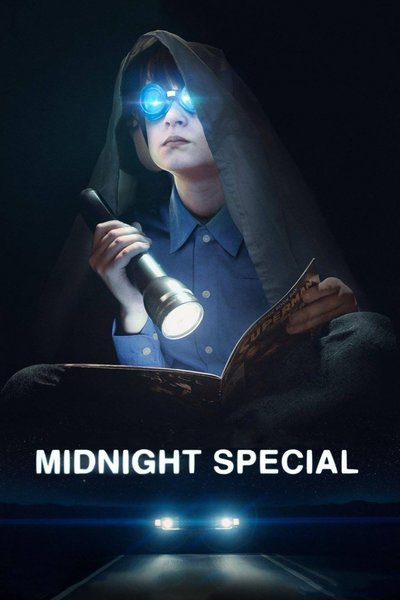 Rated PG-13 for some violence and action