All kinds of possibilities open up when a director keeps things loose. Looseness can result in unformed, repetitive, or boring storytelling. Richard Linklater's looseness operates differently. Relationships are the most important thing to him, how people connect, or don't. Linklater is obsessed with the peripheral, the seemingly unimportant or random. People in real life rarely stop dead in their tracks to have a profound moment, and they don't in his films either. When Linklater's style works (and it works in "Everybody Wants Some!!"), there is nobody quite like him.

Linklater has described "Everybody Wants Some!!" as a "spiritual sequel" to his 1993 high-school comedy "Dazed and Confused." "Everybody Wants Some!!" takes place in 1980, tracking the lives of a group of college baseball players in the three days before classes start. There are two "baseball houses," rambling affairs on the outskirts of campus where the baseball team settles in to a routine of partying, philosophizing, and competition. Dancing, romance, conversation—all become battles for dominance. The guys peacock for one another more than for the girls who show up at their parties. When the boys get dressed to go out to a club, their preening is reminiscent of John Travolta staring at himself in the mirror in "Saturday Night Fever." These guys are dudes, with the satisfied glow of successful athletes. They move with a collective strut, a swagger. They have spent their childhoods with one organizing purpose: baseball. And this sets them apart from their peers (whom they regard as slackers). None of them (except one who refers to himself as "the second Nolan Ryan") have dreams of going pro. College is an opportunity to get four more years doing what they love most before "real life" starts.

All of this could be deadly if handled poorly. Who wants to see a bunch of jocks competing to win in every moment of every day? (Well, I do, but I assume that is not true for everyone.) Linklater keeps it loose, funny, relishing in the free-form of the group dynamic. A ping pong match turns on a dime and becomes deadly serious. Guys knuckle-flick each other until they draw blood. They try to slice a baseball in half with an axe as it comes across the plate. They compete to see who can inhale the biggest bong hit. Even jumping into a river becomes a display of who does it best. Linklater approaches all of this with affection, and even kindness—one of his distinguishing characteristics. "Everybody Wants Some!!" is a corrective to the tired, false "dumb jock" stereotype.

Jake (Blake Jenner) is a freshman pitcher, entering one of the baseball houses on his first day of school, holding his milk crate full of albums (Devo's Are We Not Men visible), and confronted with the initial hostility of the mustachioed intimidating upper classmen. They aren't hostile because he's a freshman. They're hostile because he's a pitcher. ("Everybody Wants Some!!" is insightful and funny about inter-position conflicts in baseball. An older pitcher encourages Jake to accept his outsider status: "Embrace your inner strange.") Jake meets the ragtag bunch of guys in various states of chaos: smoking weed, filling up a waterbed, practicing a pitching wind-up buck-naked, etc. After a stern speech from the coach reminding them of the house rules (no alcohol, no girls upstairs in bedrooms), the group promptly breaks all of them, simultaneously, almost before the coach leaves the house.

Over the course of the three days, the guys attend four separate parties. The film presents a good cross-section of the culture in 1980: disco is still popular, country-western is coming back, and the slam-dancing sub-culture of punk is on the rise. (Humorously, one of the parties they attend is thrown by the theatre department at the college, proving that theatre kids are the same in any era.) In some environments, the jocks are cock of the walk. In others, they are out of their depth. But girl-hunting is girl-hunting whether she sports a Mohawk or a cowboy hat. Jake crushes on a sweet theatre major (Zoey Deutch). They have nothing in common except for the important fact that have both lived their short lives focused on a passion requiring seriousness and discipline. They are the opposite of "slackers." Their romance is just one part of the overall texture of the film.

Some of the cast members are recognizable actors, although there are no big stars in it. Some of the guys have no acting experience. It's a great mix. The group is a shifting mass of alliances, hostility-outbreaks, and a sense of togetherness-by-default deriving from the fact that they are a championship ball team. I was surprised at how strangely thrilling it was to finally get to see them play baseball at their first practice. All the guys do throughout the film is talk about baseball, even pre- and post-coitus, and when we see them in action it's deeply satisfying and emblematic of one of the ways in which Linklater works by stealth.

Linklater's style isn't invisible, although he approaches moments with a casual lightness of touch. Some of his cuts are laugh-out-loud funny. (My favorite cut in a Linklater film cuts comes in "Bernie," after Jack Black shoots Shirley MacLaine, and wails, "What am I going to do?") The film has an easy rhythm. Moments aren't lingered over. Hilarious details go unmentioned (the fact that they all go back to the house to change clothes, depending on the next party in the lineup.) Some of the commentary from the guys states the obvious too much, i.e.: "Have you noticed that everything we do is a competition?", but for the most part, Linklater's script avoids self-awareness that would pull you out of it. In 1980, there were still hostages in Iran. Jimmy Carter was President (but not for long). 1980 was closer to the '70s than the slick yuppie-MTV era coming down the pike, and Linklater's frequent production designer Bruce Curtis gets that distinction. (So do Gabriella Villarreal on set decoration and costume designer Kari Perkins.) There are gas guzzling cars, silk shirts with pointed collars, girls in halter tops. The soundtrack ranges from Blondie to Foreigner. The film captures an elusive in-between moment in time the second before it vanishes.

Nostalgia is at its worst when the story being told is suffused in a golden glow, that glow assuming (wrongly) that the nostalgia portrayed is universal. People are nostalgic for different things. What Laura Ingalls Wilder was nostalgic for was not what F. Scott Fitzgerald was nostalgic for, although both wrote mainly from nostalgia. There's nostalgia that becomes kitsch, the objects/fashion/music of the past coming around to be "cool" again. There's nostalgia that is interchangeable with longing and sadness. There's nostalgia that is anti-progress. Despite the "everybody" in the title, Linklater's nostalgia is specific to the sounds and smells and sights of the time in which he grew up, in which his personality was formed. Crucially, he doesn't laugh at these younger selves, although he often finds them extremely funny. "Everybody Wants Some!!" doesn't fall into the trap that a lot of period films do where the audience is encouraged to consider themselves superior to the folks "back then." Linklater cuts us off at the pass when we may be inclined to snicker. He's not afraid of including sincerity. "Everybody Wants Some!!" features two girls mud-wrestling in their underwear and it also shows a quiet romantic moment near a river at dawn. Neither scene jars or upsets the balance. With all the rough-housing, it's an extremely gentle film.

Linklater's best films are high-wire acts. Not to be tried by amateurs. 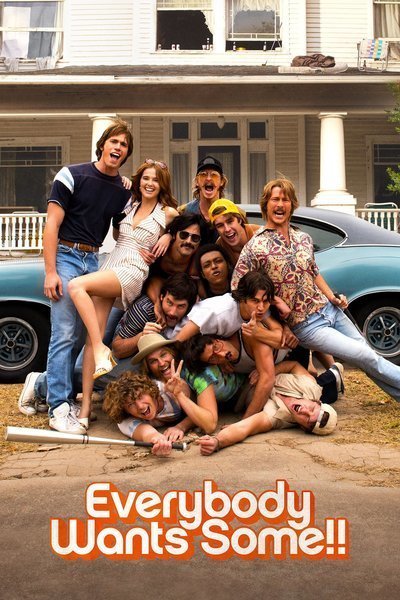 Rated R for language throughout, sexual content, drug use and some nudity.

Will Brittain as Billy Autrey