Imagine a stranger-in-a-strange-land revenge thriller about a wide-eyed Anglo bombshell (Scarlett Johansson) who gets kidnapped and abused in Taiwan by nasty, sweaty, shouting Korean gangsters and then escapes to seek justice. Then imagine this same movie starring, say, a lightning fast kick boxer who can knock a dozen opponents' teeth out before they can raise a single fist. Now imagine this same movie injected with a dose of apocalyptic science fiction, with the woman gaining strange powers as the story unfolds. Then envision midnight-movie touches mixed into the filmmaking: flash cuts of predators and prey enhancing otherwise typical scenes of plans being hatched; monologues about brain capacity and the true meaning of time coupled with psychedelic visions and wormholes and explanatory objects materializing from thin air.

That's Luc Besson's "Lucy," a thriller about an American woman who gets kidnapped into service as a drug mule bearing an experimental synthetic hormone, accidentally absorbs some of it, then sheds her physical, intellectual and perceptual limitations. I could describe five or six other kinds of movies that in some way also echo "Lucy." Sections may remind you of the original "The Matrix" and the last hour of "Akira," and the final ten minutes play like a Greatest Hits of science-fiction "trip" movies. You've seen a lot of the individual situations and filmmaking techniques in "Lucy" as well. In fact, you'd be hard pressed to identify one idea, scene or element in the picture that is not a cliche.

But the total package feels fresh. From the minute that Johansson's title character suffers a beating in captivity that ruptures the drugs in her stomach and releases them into her bloodstream (a Yankee nightmare), the film enters a realm of continual delight, though not always surprise. There's no point naming any of the other major characters, as there really are no other characters, only types: the arrogant fat-cat drug dealer (Choi Min-Sik) who thinks he can control the short blond drug mule and learns the hard way that he can't; the brilliant, deep-voiced scientist (Morgan Freeman, who else?) whose theoretical studies of the human brain's untapped potential make him an information source and then finally a kind of partner-savior to Lucy; the handsome nice-guy Parisian cop (Amr Waked) who assists Lucy during her climactic mission to acquire more of the experimental hormone to ingest and become whatever it is that she's becoming: a 1950s sci-fi monster, probably—the kind that cannot be killed because everything you shoot at it makes it stronger and hungrier.

Lucy is little more than a type herself—a representative of humanity in its un-mutated, non-super state. Johannson's mid-career transformation from husky-voiced ingenue to intensely physical matinee idol is one of the more fascinating arcs in American cinema. It's only her control over her body, voice and eyes—and maybe our awareness that her performances in this movie, "Her" and "Under the Skin" are all of a piece; Lucy even uses the phrase "under the skin" at one point!—that stops "Lucy" from being tiresome. Her work keeps us from realizing that Besson's script has botched the chance to tell a deeper story, one that's not just bombastically exciting and superficially clever, but quietly tragic.

"Lucy" starts with shots of the prehistoric ape-woman Lucy and periodically returns to her throughout the story, not-too-subtly comparing the heroine's transformation to that of the species itself ("from evolution to revolution," to quote one of the script's more pungent phrases). And yet there are only two moments that make us really understand and empathize with Lucy as something other than a cipher who represents the un-evolved human. One is an early scene of her being terrorized and abused by Taiwanese drug thugs: Lucy's abject helplessness here is hard to watch. The other occurs deeper in the story when Lucy realizes she's about to embark on a terrifying and probably one-way transformative journey and phones her mom. The scene is shot mostly in tight closeup. The dialogue has a goofy Proustian boldness: "I remember the taste of your milk in my mouth ... I want to thank you for a thousand kisses that I can feel on my face."

That scene is so brazenly powerful that in retrospect it made me wish the main character had gone on a journey with more emotional gradations. Heck, I'd have settled for more than the two that Besson deigns to give us: "Oh, my God, these guys want to kill me" and "I am God, watch me kill these guys." When the hormones enter Lucy's bloodstream it's as if a switch has been flipped. The heroine starts speaking in monotone and tilting her head at looming men like a quizzical bird regarding a worm that it's about to devour. She's woman-as-Terminator. The Terminator is a great movie monster, but there's a reason why it's a supporting character in the films that bear its name.

Like many films by Besson—"The Professional," "The Fifth Element," "The Messenger" and other high-octane shoot-'em-ups—"Lucy" starts out riveting but becomes less engaging as it goes along. It keeps introducing potentially rich narrative veins and then failing to tap them. It too often falls back on gunplay and gore just when you think it might finally delve into the notions that it keeps serving up with such fanfare (the falseness of the idea of uniqueness; the self-defeating nature of a species "more concerned with having than being"; time as "the one true unit of measure").

Nevertheless: "Lucy" is a fun, confident work. It's fast and tight and playful even when it's sadistic and violent, which is often. It lasts about 90 minutes and change but feels longer in a good way, because every second is packed tight. It's full of itself, yet it still keeps winking at you. It wants to be taken seriously, but not so seriously that you don't laugh at (and with) the sight of Lucy strolling into a gunfight wearing nosebleed heels, or making enemies writhe like marionettes on invisible strings. The movie is alive. It pops. 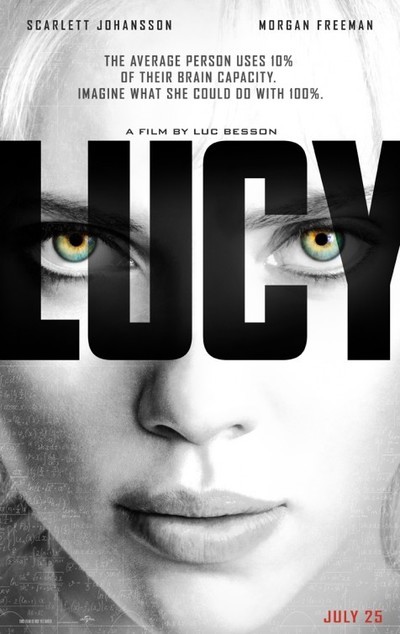