Carnivores, prepare to salivate. "Chef," an affable and affectionate celebration of food, friendship and familial love, may feature two of the most photogenic ladies in Hollywood but even such dishy visions as Sofia Vergara (using her indoor voice for once) and Scarlett Johansson (with boho bangs and hipster tattoos) can’t hope to compete with the sight of a sizzling slab of Texas-style brisket that’s been grilled to crusty blackened perfection.

Just as audiences were compelled to clap after Jennifer Hudson got through decimating the Broadway showstopper "And I Am Telling You" in "Dreamgirls," many filmgoers may be moved to audibly share their appreciation of the succulent slices of barbecued heaven. That is in addition to being able to ogle scrumptious portions of Cuban sandwiches, beef cheeks, Cornish game hen  and a glistening, gluttonous mound of fresh-off-the pig  bacon. Not that there aren’t an occasional bunch of carrots and a couple yucca roots lying around the kitchen. But no one will ever mistake "Chef" of being vegan-friendly.

The script, alas, is somewhat less dramatically meaty than the entrees. Let’s just say the final outcome is as almost-as-expected as the bill at the end of an evening of dining out. But it is a pleasure to sit back and enjoy the goings-on as performed by an engaging troupe of actors and to savor the efforts of "Chef"’s star and writer/director Jon Favreau, whose warm and down-to-earth personality flavors every scene. This is comfort comedy, pure and simple.

"Chef" is being hailed as a return of sorts to Favreau low-budget indie roots as a filmmaker with "Swingers" and "Made." That was before he was recruited for summer tentpole duty with "Iron Man" and "Iron Man 2," along with the roundly panned outer-space Western "Cowboys & Aliens." Although this re-embrace of a more modest approach—a palate cleanser, as it were—probably has most in common with the good-natured spirit and emotional highs of "Elf" than those early bro-capades with pal Vince Vaughn.

However, it is not hard to make a connection between Favreau’s motivations behind making "Chef" and those of his of Carl Casper, a respected head cook at a fancy Los Angeles eatery who feels stymied by the creative restrictions placed upon him by his more conservative boss (Dustin Hoffman, in testy terrier mode). “Be an artist on your own time,” shouts Hoffman, himself an infamous perfectionist who has probably been the recipient of such advice back in the day.

When Carl is forced to serve an influential restaurant critic (Oliver Platt) the same old tried-and-true menu instead stretching beyond the expected, the result is a scathing review that not only tears into his “needy aunt” recipes but also insults his girth, suggesting that the chef has been consuming all the meals sent back to the kitchen. It’s a blow to his very soul.

What blogging was to "Julie & Julia," tweeting is to "Chef." Carl gets a first-hand lesson in the dangers of social media when his 10-year-old tech-whiz son, Percy (admirably real-kid-like Emjay Anthony), shows him how to set up a Twitter account so he can follow the reaction to the nasty write-up. When Carl accidentally replies to the critic publically, it sets off a flame war as well as results in a viral smart-phone video of him losing his temper that ultimately gets him canned.

Carl’s well-off ex-wife Inez (Vegara) decides to play fairy godmother—rarely has a former partner in a movie been this mature and supportive—pays his way to Miami so he can share more time with their son while she works. Her ulterior motive is for him to get his juices flowing again by revisiting where he got his start in the food business. She also recruits her first ex-husband,  the wealthy owner of a local construction firm, to provide a food truck so Carl can get back to basics and start fresh.

At this point, "Chef" briefly becomes "The Robert Downey Jr. Show" as Favreau allows his Iron Man to amusingly turn his character into an attention-deficit poster boy who is capable of discussing five different subjects at the same time in a single conversation.

If the Food Network ever decided to add a soap opera to its lineup, it could do worse than borrow from Favreau’s  stripped-down yet satisfying recipe. I, for one, would add it to my DVR queue, even if they recast Carl with Guy Fieri. 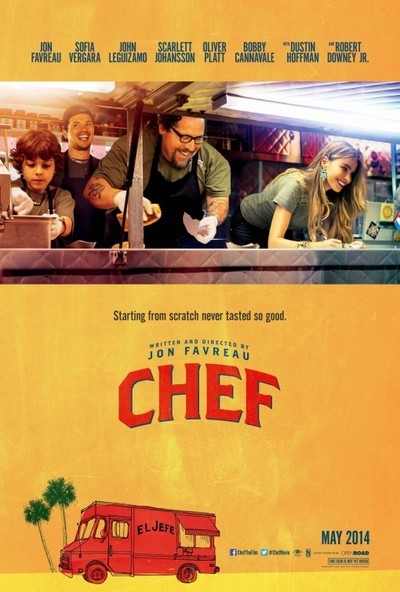 Rated R for language, including some suggestive references