Tom Hardy might be the closest thing we have to a Marlon Brando right now—not just in the sense that Hardy is a Method actor who loves makeup and costumes (and sometimes masks), and has a theatrical, at times outright hambone streak, but also in that Hardy, like Brando, seems to operate according to his own internal logic whether it matches what's around him or not. He's also like Brando in that when Hardy succeeds, he's audaciously wild and brilliant and you can't imagine anyone else being more original or effective, and when he fails, the result is so miscalculated and bizarre that you sometimes can't even tell what he thought he was trying to do. His deliberate artificiality also links him to an older generation of stage-trained movie stars who retained a touch of sawdust-and-footlights bigness, like Orson Welles, who shared Hardy's fondness for prosthetic makeup and bizarre voices that sounded dubbed even if they weren't.

Writer/director Josh Trank's "Capone," a star vehicle in which Tom Hardy plays the gangster of the title, offers plenty of both Hardys, often alternating from one scene to the next. It casts Hardy as a middle-aged, syphilitic and physically deteriorating Al Capone, released from prison on tax evasion charges and eking out his final stretch in a Florida mansion surrounded by swampland.

Sometimes the effect is akin to watching a late-period Brando performance where you’re not sure who he’s talking to even when he’s addressing another character directly. Other times it’s like watching a young Orson Welles playing a shambling old man in a baldness-simulating skincap at the end of "Citizen Kane," staring at the world through watery, regretful eyes. The film makes space for other actors, including Matt Dillon as Capone's right hand man, Kyle MacLachlan as a mob doctor, Linda Cardellini as Capone's wife Mae and Kathrine Narducci as his sister Rosie. But it’s essentially a one-man show that happens to include supporting players, and their  only job is to react to the star's thespian exertions or talk about his character when he's not around.

It wouldn't be a Tom Hardy star turn without a mask and a voice and some flamboyant bits of wardrobe. Here he gets to putter around in sleep clothes while muttering like Popeye the Sailor Man's long-lost Brooklyn cousin, and dress like Norma Desmond in a floppy hat and shawl and sunglasses to avoid being recognized en route to a fishing trip, and use a shotgun to kill an alligator who dared snatch away a fish that he caught, and burn countless cigars, always puffing the smoke with a flourish, and heave into metal buckets, and glance down at pee stains on a chair that were caused by his failing bladder and ask his companions, "Arrgh, what's this? Where'd this come from?"

The star's Capone Voice is something else, though—right up there with Hardy's Bane in "The Dark Knight Rises" and the title character of "Bronson" and the murderous trapper in "The Revenant" in goofy daring, as well as raw material for celebrity impressions that one might attempt while buzzed at a party. No matter how many times you hear it, it never seems to issue organically from the man on the screen. And it's so stylized that your impulse might be to glance around the rest of the frame to see if it’s coming from an animated character, perhaps hiding behind a chair.

Ultimately the viewer might ask what the point is. The movie never quite answers that question. Not that it's obligated to—but in lieu of an agenda so basic, we need to at least feel as if we're getting some insight into psychology or criminality or something. Nor does "Capone" offer a main character darkly compelling enough to offset what a hideous, self-involved, spaced-out zero he is. He just seems like a sad old bastard who's fallen apart to the point where there's no reason to be scared of him unless he has a firearm in his hand.

Nor does the film permit the other characters, or us, to really connect with Capone emotionally, so hermetically sealed-off is Hardy's acting and the film's specific attention to it. We don't get a sense of what the others originally saw in him as a friend, a husband, a brother, a boss, a thrilling and moneymaking gangster icon, etc., to inspire such loyalty at the end of his violent and ultimately miserable existence. It's the discount version of Martin Scorsese's "The Irishman." Life is hard; our choices have consequences; aging and death can be painful and prolonged; maybe there's a Creator who has a plan, even a cruel one, or maybe we're left to fend for ourselves in a cold and anonymous universe; and so on.

Was late-in-life Capone the best vehicle through which to explore whatever it was the film hoped to explore? Your mileage will vary. For my part, I've seen a lot of "final days of a difficult man" films, and this one falls somewhere in the middle of the quality continuum, with the daring, contemplative "Pasolini" and "The Irishman" on one end, and the "let's throw some pancake makeup on these actors" fiascos "Mr. Saturday Night" and "For the Boys" on the other.

Trank, an original and somewhat off-kilter filmmaker who hasn't been well-served by studios, seems to be in control here, and the result is intriguingly measured and counterintuitive for a glossy psychological drama. While Hardy's snarling and rumbling and middle-distance staring are electrically unpredictable, the film's compositions and movements are mapped, lit, and juxtaposed so precisely that one imagines "Capone" being  storyboarded within an inch of its life—as movies were in earlier eras, before directors decided that the default was shooting with lots of cameras and figuring out how to "cover" the scene during editing.

The effect here is akin to watching a cranky old tiger pacing in a small cage. It's hard not to appreciate the old-school craft involved, as well as the impulse to build a feature film around a historical personage in an intimate, realistic situation. Whether you find the result mesmerizing or dull will depend on factors that can't be measured by a star rating. Mine represents  mystified respect. 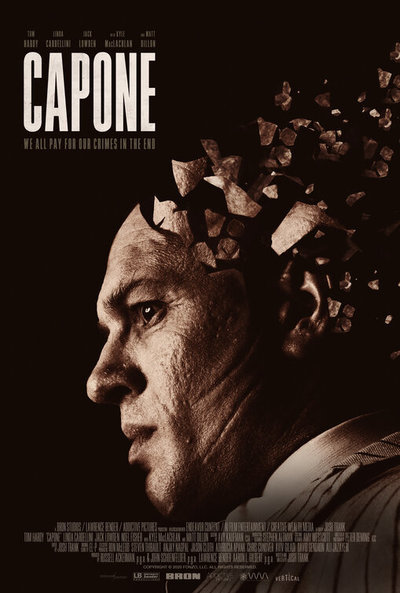 Rated R for strong/bloody violence, pervasive language and some sexuality.