Call Me By Your Name

Luca Guadagnino’s films are all about the transformative power of nature—the way it allows our true selves to shine through and inspires us to pursue our hidden passions. From the wild, windswept hills of “I Am Love” to the chic swimming pool of “A Bigger Splash,” Guadagnino vividly portrays the outside world as almost a character in itself—driving the storyline, urging the other characters to be bold, inviting us to feel as if we, too, are a part of this intoxicating atmosphere.

Never has this been more true than in “Call Me By Your Name,” a lush and vibrant masterpiece about first love set amid the warm, sunny skies, gentle breezes and charming, tree-lined roads of northern Italy. Guadagnino takes his time establishing this place and the players within it. He’s patient in his pacing, and you must be, as well. But really, what’s the rush? It’s the summer of 1983, and there’s nothing to do but read, play piano, ponder classic art and pluck peaches and apricots from the abundant fruit trees.

Within this garden of sensual delights, an unexpected yet life-changing romance blossoms between two young men who initially seem completely different on the surface.

17-year-old Elio (Timothee Chalamet) is once again visiting his family’s summer home with his parents: his father (Michael Stuhlbarg), an esteemed professor of Greco-Roman culture, and his mother (Amira Casar), a translator and gracious hostess. Elio has the gangly body of a boy but with an intellect and a quick wit beyond his years, and the worldliness his parents have fostered within him at least allows him to affect the façade of sophistication. But beneath the bravado, a gawky and self-conscious kid sometimes still emerges. By the end of the summer, that kid will be vanquished forever.

An American doctoral student named Oliver (Armie Hammer) arrives for the annual internship Elio’s father offers. Oliver is everything Elio isn’t—or at least, that’s our primary perception of him. Tall, gorgeous and supremely confident, he is the archetypal all-American hunk. But as polite as he often can be, Oliver can also breeze out of a room with a glib, “Later,” making him even more of a tantalizing mystery.

Chalamet and Hammer have just ridiculous chemistry from the get-go, even though (or perhaps because) their characters are initially prickly toward each other: testing, pushing, feeling each other out, yet constantly worrying about what the other person thinks. They flirt by trying to one-up each other with knowledge of literature or classical music, but long before they ever have any physical contact, their electric connection is unmistakable. Lazy poolside chats are fraught with tension; spontaneous bike rides into town to run errands feel like nervous first dates.

Writer James Ivory’s generous, sensitive adaptation of Andre Aciman’s novel reveals these characters and their ever-evolving dynamic in beautifully steady yet detailed fashion. And so when Elio and Oliver finally dare to reveal their true feelings for each other—a full hour into the film—the moment makes you hold your breath with its intimate power, and the emotions feel completely authentic and earned.

The way Elio and Oliver peel away each other’s layers has both a sweetness and a giddy thrill to it, even though they feel they must keep their romance a secret from Elio’s parents. (Elio also has a kinda-sorta girlfriend in Marzia [Esther Garrel], a thoughtful, playful French teen who’s also in town for the summer.) One of the many impressive elements of Chalamet’s beautiful, complex performance is the effortless way he transitions between speaking in English, Italian and French, depending on whom Elio is with at the time. It gives him an air of maturity that’s otherwise still in development; eventually his massive character arc feels satisfying and true.

And yet, the most resonant part of “Call Me By Your Name” may not even be the romance itself, but rather the lingering sensation that it can’t last, which Guadagnino evokes through long takes and expert use of silence. A feeling of melancholy tinges everything, from the choice of a particular shirt to the taste of a perfectly ripe peach. And oh my, that peach scene—Guadagnino was wise when he took a chance and left it in from the novel. It really works, and it’s perhaps the ultimate example of how masterfully the director manipulates and enlivens all of our senses.

There’s a lushness to the visual beauty of this place, but it’s not so perfect as to be off-putting. Quite the opposite. Despite the director’s infamous eye for meticulous detail, cinematographer Sayombhu Mukdeeprom’s 35mm images provide a tactile quality that heightens the sensations, makes them feel almost primal. We see the wind gently rustling through the trees, or streaks of sunlight hitting Elio’s dark curls through an open bedroom window, and while it’s all subtly sensual, an inescapable tension is building underneath.

Guadagnino establishes that raw, immediate energy from the very beginning through his use of music. The piano of contemporary classical composer John Adams’ intricate, insistent “Hallelujah Junction – 1st Movement” engages us during the elegant title sequence, while Sufjan Stevens’ plaintive, synthy “Visions of Gideon” during the film’s devastating final shot ends the film on an agonizingly sad note. (You’ll want to stay all the way through the closing credits—that long, last image is so transfixing. I seriously don’t know how Chalamet pulled it off, but there is serious craft on display here.)

In between is Guadagnino’s inspired use of the Psychedelic Furs’ “Love My Way,” an iconic ’80s New Wave tune you’ve probably heard a million times before but will never hear the same way again. The first time he plays it, it’s at an outdoor disco where Oliver feels so moved by the bouncy, percussive beat that he can’t help but jump around to it and get lost in the music, lacking all sense of self-consciousness. Watching this towering figure just go for it on the dance floor in his Converse high-tops is a moment of pure joy, but it’s also as if a dam has broken within Elio, being so close to someone who’s feeling so free. The second time he plays it, toward the end of Oliver and Elio’s journey, it feels like the soundtrack to a time capsule as it recaptures a moment of seemingly endless emotional possibility.

They know what they’ve found has to end—we know it has to end. But a beautiful monologue from the always excellent Stuhlbarg as Elio’s warmhearted and open-minded father softens the blow somewhat. It’s a perfectly calibrated scene in a film full of them, and it’s one of a million reasons why “Call Me By Your Name” is far and away the best movie of the year. 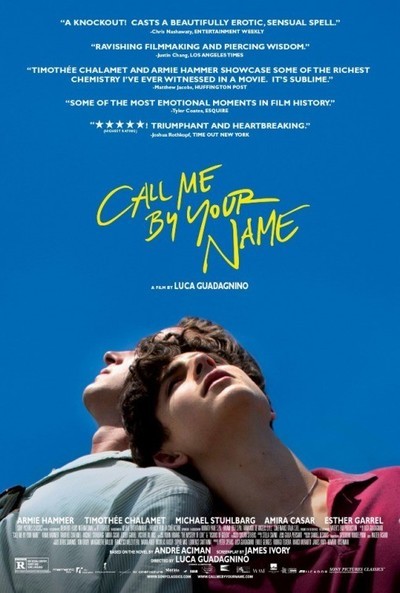 Rated R for sexual content, nudity and some language.