Simultaneously lush and lurid, sumptuous and startling, “A Bigger Splash” never goes where you expect, even as its undercurrent of danger is unmistakable from the start.

With the follow-up to his landmark 2009 drama “I Am Love,” director Luca Guadagnino once again reveals himself to be a master craftsman. He draws four beautiful and well-balanced performances from his excellent cast, including brash, grandiose work from Ralph Fiennes. What Fiennes does here feels like jazz itself: It’s physical and primal, jumpy and funny in equal measure, and he manages to make an annoying, demanding character thoroughly entertaining.

At the other end of the spectrum is a fascinating, wordless performance from Tilda Swinton, the exquisite star of “I Am Love.” She croaks out a whisper here and there (and even a silent orgasm, standing up) which only adds to her perpetually mysterious air. She does so much with those clear, blue eyes, that statuesque presence and the confidence she exudes no matter what she’s wearing (or even when she’s wearing nothing at all, which frequently is the case for all the film’s stars).

Rounding out the foursome are Matthias Schoenaerts as Swinton’s hunky, younger lover and Dakota Johnson as the slinky, seductive daughter Fiennes’ character only recently realized he had. Their lengthy backstories and newfound alliances reveal themselves over the course of a seemingly idyllic vacation at a picturesque villa on the Italian island of Pantelleria, where the threat of a sirocco stirring things up even further is constant.

Cinematographer Yorick Le Saux (who also shot Guadagnino’s gorgeous “I Am Love”) luxuriates in them all as they bask and tangle in the sun and in and out of a swimming pool that will become increasingly crucial as the film progresses. (“A Bigger Splash” is a loose remake of the 1969 Jacques Deray film “La piscine.”) Schoenaerts’ pecs, Johnson’s torso, Fiennes’ smile and even Swinton’s feet are all monuments to be worshipped as much as the cool, blue Mediterranean Sea or the imposing volcanic boulders that surround it.

Swinton stars as Marianne Lane, a Bowie-esque rock star whom we first glimpse in metallic sequins and face paint, taking the stage to the deafening chants of an adoring stadium crowd. But soon, it’s clear that she’s forcing herself not to speak much less sing; she and Schoenaerts’ Paul, a photographer and documentarian, have retreated to this remote paradise to allow Marianne to rest and recover her voice.

Guadagnino, working from a script by David Kajganich, efficiently and vividly establishes the bohemian yet domesticated life Marianne and Paul have created for themselves, full of nude sunbathing, midday lovemaking and long soaks in the nearby mud baths.

The noisy, unexpected arrival of Fiennes’ Harry, Marianne’s longtime friend and record producer, interrupts their reverie. Turns out Harry not only was Marianne’s lover for six years, he’s also the man who introduced her to Paul (and gave them his blessing to launch into their own romance—a decision he now regrets). Harry has shown up with the blonde, leggy Penelope (Johnson), who alternates between making insults and inappropriate come-ons. She insists she’s 22 although her impetuousness suggests otherwise, and “A Bigger Splash” allows Johnson to be both funnier and sexier than she was in “Fifty Shades of Grey.”

Tensions mount as the days pass, the wind blows harder and dustier and the villa seems to grow smaller and more suffocating. Harry breaks through all that, though—or perhaps he’s just oblivious by inviting random friends over, regaling them with tales of his rock-music glory days, playing Rolling Stones records and showing off his moves like Jagger. This sequence may actually be the highlight in a movie filled with strong and striking visuals: the sight of Fiennes in an unbuttoned shirt and swim trunks joyously letting “Emotional Rescue” radiate from every fiber in his being. He’s never been so much fun to watch—not even when he got to vamp it up as Voldemort.

Guadagnino ratchets up the feeling of claustrophobia with extreme close-ups that ignite the senses: hands gutting a fish or peeling fruit, eyes as they survey the other characters, a mouth moving with non-stop chatter and laughter. Marianne could easily be a contemporary rock-star—Swinton is a timeless and towering figure, after all—but Guadagnino’s use of zooms and pans suggests an homage to European psychological dramas like the film’s source material. He’s created a concoction that’s sexy and strange all at once.

But then “A Bigger Splash” goes slack and silly toward the end, just as it should be at its most gripping. A ghastly discovery almost seems like it’s being played for laughs. In fact, because the film is so precise for long in both its beauty and its weirdness, the tonal shift toward uncomfortable farce feels that much more disappointing. Guadagnino also tries to drop in hints about the plight of Tunisian refugees arriving on the island seeking sanctuary but they never really resonate or cohere with the story as a whole.

“A Bigger Splash” might be intended as a cautionary tale about the perils of being white, beautiful and privileged—but it’ll probably register more as a dazzling escape. 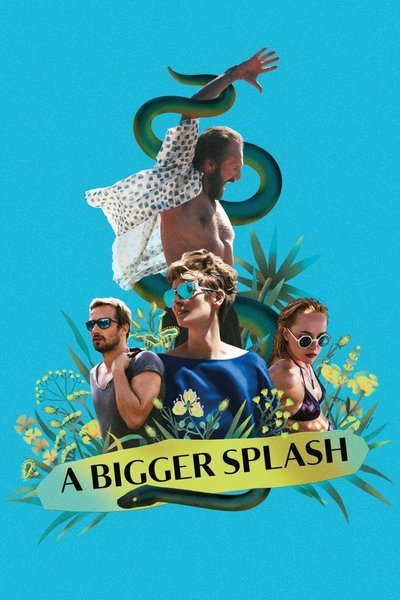