Peg Dahl (Zoey Deutch), the frenetically ambitious and amoral lead of Tanya Wexler's "Buffaloed," is a natural-born hustler, the Tracy Flick of financial ambition, whose only goal in life is to make a buck, and make it any way possible. Hailing from blue-collar Buffalo, New York, she doesn't come from wealth or privilege. Even a short stint in Albion Prison for scalping counterfeit tickets to Buffalo Bills games when she was barely out of high school didn't dampen Peg's drive. Now an ex-con, she lives with her mother (Judy Greer), who runs a hair salon—illegally—out of their home, and scans the landscape restlessly, looking for the next hustle. When she gets a glimpse of the thriving debt collection industry in Buffalo, she sees her chance. This, this is a world—a grimy underworld, really—where her particular talents will be recognized. She's not wrong.

With a screenplay by Brian Sacca, who grew up in the Buffalo area, "Buffaloed" is a showcase for the mega-talented Deutch, who tosses herself into the role like a maniacal fidget-spinner, all flash and charm. She's cocky and obnoxious, a low-rent Jordan Belfort (who was already low-rent), the kind of bottom feeder who thrives in a criminal sketchy atmosphere. She gets a job at a debt collection joint run out of a warehouse, owned by a dirtbag named "Wizz," played with gorgeous sinister sleaze by Jai Courtney. She's the only woman in the company, and determined to beat all the boys at their own game. She does. When she decides to strike out on her own, setting up her own agency, she incurs the wrath of Wizz, who is not someone you want on your bad side. Or your good side. In fact, you never want to hear from someone like Wizz, ever.

Peg recruits people into her company, misfits and outsiders who are hungry and mold-able. There are a couple of times where the Jordan Belfort comparison is almost overwhelming, particularly during a pep-talk meeting, where Peg whips her employees into a frenzy.

The in-jokes about Buffalo—its sports teams, chicken wings, lingo—dominate, but more perhaps could be made of it. This is a comedy about a serious subject that affects millions of Americans, and so a deeper exploration of Buffalo's Rust Belt bona fides—and how this may explain why the debt collection business has taken such hold there—would have been welcome. There are moments where Peg talks to the camera in direct-address, and a couple of flourishes show the influence of "The Big Short," although "The Wolf of Wall Street" is the real precursor. (Incidentally, Saaca, also an actor, played "Pinhead" in "The Wolf of Wall Street.")

Wexler is really adept at comedy pacing, a rarity in any era. Her 2011 film "Hysteria" was about Mortimer Granville, the Victorian-era doctor who invented the electric vibrator to help his female clientele suffering from "hysteria." "Hysteria" is ... hysterical, and features wonderful performances from Hugh Dancy, Jonathan Pryce, Maggie Gyllenhaal, and Rupert Everett. With all the comedy present, "Hysteria" also made its serious points about women's sexual freedom, and it did so in such a happy sex-positive way, the whole thing is infinitely infectious and entertaining. (When it screened a couple years ago at Ebertfest, there were entire sequences where you could barely hear the dialogue because of the waves of laughter in the audience.) While "Hysteria" got great reviews, Wexler found it challenging afterwards to get other projects off the ground. In between then and "Buffaloed," nine years, she directed a couple of television episodes, and that's it. This is a sadly familiar story. There is no reason that Wexler shouldn't be directing more feature films, and it's good to see her back behind the camera in "Buffaloed," which churns with barely-controlled chaos in its best sequences.

What's fun about "Buffaloed" may be the same thing that some will take issue with: Peg is not a hero, although she has flair and moxie for days! She's sometimes even scarily callous, especially in her romantic relationship with Graham (Jermaine Fowler), a lawyer who has serious reservations about what she does for a living. How are we supposed to "root" for someone like Peg? She's not a good person! She makes bad choices! Well, yes. But ... Are women only allowed to be inspiring figures, inhabiting self-empowerment narratives? The Victorian-era was hugely invested in the myth that women were morally superior in every important way to tempt-able corruptible men. This was spun as a compliment (I guess?), part of its devastating effectiveness, but, of course, it was just another form of propaganda designed to limit women's freedom. The recent "Hustlers" was a wonderful showcase for Jennifer Lopez, who did not shy away from the shadier sides of her character. You could see why people got sucked into the character's orbit, but you could also see her for what she was: a grifter and a user. It was such a good performance, filled with ambiguous shading and complexity.

In an interview with Buffalo News, Wexler addressed all of this, saying about the character of Peg Dahl, “Women don’t get these roles. We don’t write them. I think sometimes as a culture … it makes us uncomfortable because we still cast women in a certain light, hold women on a pedestal or take them down and put them off to the sideline. There are roles, and then there are girls’ roles. What I love about this is there’s just a role—and a killer actress to play it.”

"Buffaloed" is refreshing in how it challenges these norms, and in so doing, gives Deutch—who has already proven her comedic acting chops in "Everybody Wants Some!!," "Zombieland: Double Tap" and the Netflix series "The Politician"—a chance to shine at the center of the narrative. 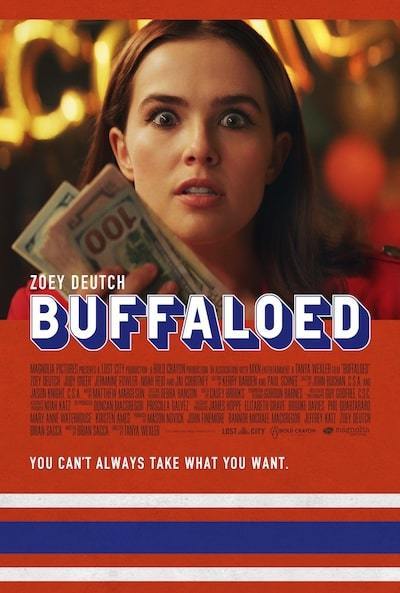