The vast majority of sequels are unnecessary, but “Zombieland: Double Tap” feels particularly so, especially coming out a decade after the original.

The first “Zombieland” from 2009 was a lot of fun, with its gleeful balance of gore and snark and a bouncy, self-referential nature. It was a zombie movie that knew it was a zombie movie, and it had a blast in every sense of the word messing with the tropes of the genre. Woody Harrelson, Jesse Eisenberg, Emma Stone and Abigail Breslin enjoyed breezy chemistry and snappy banter. The whole thing was a lark—a stepping-stone on the road to future success for everyone, including director Ruben Fleischer (“Venom”) and writers Rhett Reese and Paul Wernick (the “Deadpool” franchise).

Ten years later, they’re all back (along with screenwriter Dave Callaham), but it’s hard to find justification in returning to these hardened characters and scorched territory. “Zombieland: Double Tap” is more of the same, but also much less. The cast is larger, the carnage is gnarlier and the comedy is even more meta than before. But while individual moments and action sequences might be amusing, the endeavor as a whole feels like a tepid retread. Callbacks to running gags from the first “Zombieland” result in little more than sporadic chuckles, and the characters at the center of this new adventure haven’t developed in ways that are meaningful or compelling.

Tallahassee (Harrelson), Columbus (Eisenberg), Wichita (Stone) and Little Rock (Breslin) have settled into a makeshift family dynamic as comfortably as possible, given that they’re under near-constant attack. Tallahassee is the cranky, politically incorrect father figure, Columbus and Wichita are the playful lovebirds and Little Rock is the spunky and rebellious younger sister. Their home is The White House (now surrounded by trash and weeds, as we see in a graphically violent, slo-mo slay fest to the blaring tune of Metallica’s “Master of Puppets”), which they’ve turned into more of a frat house full of sporting equipment, Christmas lights, pop culture paraphernalia and empty beer cans. (While the film’s laughs are hit-and-miss, the production design from Martin Whist—whose inspired work includes “Bad Times at the El Royale”—is a consistent highlight.)

Columbus once again explains the milieu and the characters’ daily existence with wall-to-wall narration, often spelling out to us what we can obviously surmise or see for ourselves. His rules for survival pop up in text on screen—cardio, never trust bathrooms, enjoy the little things in life, etc.—but the device quickly grows tiresome. So do his frequent reminders that he knows we’re watching him and his friends in a movie, with jokes about putting down your Milk Duds or experiencing “Zombieland Double Tap” in 4DX.

Eventually another female character arrives in the form of Zoey Deutch’s dippy, blonde Madison, who’s stayed alive this whole time by hiding in a Pinkberry freezer at the mall. In her pink velour Juicy Couture sweats and Von Dutch tank top, her vocal fry punctuating the ends of her Valley Girl upspeak, Madison is more of a one-joke idea than an actual human being. But Deutch is so irresistibly adorable and radiates such sunny guileless in this cold, bleak world that her presence provides a welcome respite.

Other new additions to the cast don’t get the opportunity to contribute nearly so much, including a sadly squandered Rosario Dawson as the manager of an Elvis-themed motel near Graceland. She’s tough and independent but the would-be romance between her and Harrelson’s character is barely there. Similarly, there’s little to a guitar-playing hippie named Berkeley (Avan Jogia) with whom Little Rock strikes up a flirtation. And while the meeting of Tallahassee and Columbus with their eerie doppelgängers Albuquerque (Luke Wilson) and Flagstaff (Thomas Middleditch) is a clever idea, it drags on longer than it should.

All these usually appealing actors are stuck in a plot that’s episodic and doesn’t gain much momentum. It’s essentially a road trip with one big battle after another, featuring zombies that have evolved and become harder to kill. Pop culture references and self-referential riffs dot the landscape. Relationships are tested. Eventually, it ends.

Along those lines, though, make sure to stay in your seat during the closing credits: In revisiting elements from the original “Zombieland,” Fleischer and Co. at least had the good sense to bring back the best one of all. 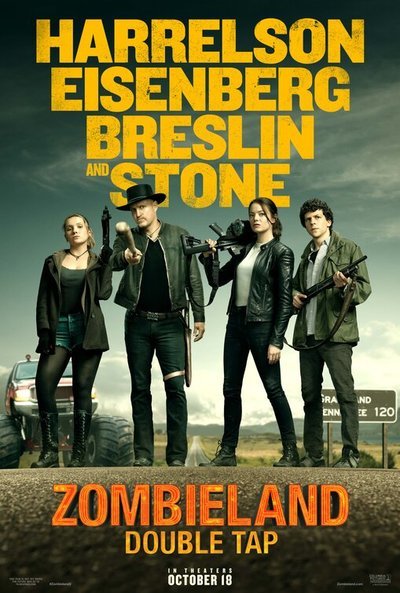