Jennifer Lopez struts onto the main stage of a cavernous strip club in “Hustlers” to the blaring tune of Fiona Apple’s late ‘90s anthem “Criminal”—the first line of which, “I’ve been a bad, bad girl,” suggests the knowing, playful tease to come.

Lusty men in musty suits immediately begin throwing money at her legendary derriere—not Lopez’s, exactly, but that of the veteran exotic dancer she portrays, the impeccably preserved Ramona. Still, it’s hard to discern completely between Lopez the superstar and the larger-than-life character she plays in “Hustlers,” and that’s actually part of the pleasure of watching this career-best performance from the multi-talented multi-hyphenate. We know this figure—we know the swagger, the magnetism, the incandescent ability to work an audience—and yet, Lopez has repurposed and repackaged all her well-honed abilities here as a reminder that before she was known as J.Lo, she was a naturally gifted actress.

Seeing Lopez’s best screen work since her early heyday of “Selena” and “Out of Sight” isn’t the only reason to check out writer/director Lorene Scafaria’s crime drama, but it’s a huge draw. In telling the true story of a group of strippers who lured, drugged and fleeced their wealthy Wall Street clients out of millions, “Hustlers” as a whole is a blast, stomping and striding with the confidence of Lopez’s thrilling introduction.

Scafaria leans a bit too heavily into classic Scorsese filmmaking tactics: the matter-of-fact narration describing the scam, her use of slow motion and zooms to heighten the emotion of a moment, the pop, rock and R&B soundtrack ranging from Janet Jackson and Britney Spears to Bob Seger and The Four Seasons, with Chopin sprinkled throughout. (Her long, opening tracking shot—from a dressing room, through a hallway, onto the stage, down the stairs and out into the crowd—does provide an impressive, immersive entrée to this realm.) And perhaps we get one or two montages too many of the high-end shopping and lavish lifestyle these ladies enjoyed with their ill-gotten gains. It’s “Goodfellas” in a G-string. But Scafaria’s film is always a blast to watch, resulting in a surprising level of emotional depth.

Based closely on Jessica Pressler’s New York magazine article (with Julia Stiles serving as the journalist’s stand-in), “Hustlers” follows Constance Wu’s shy “new girl,” who goes by the stage name Destiny: a Queens native and child of immigrants navigating the world of Costco-sized strip clubs in The Big City. She’s doing it for financial survival to support the grandmother who raised her (Wai Ching Ho) and she doesn’t show much enthusiasm or talent for this pursuit at first. But seeing Ramona command the stage makes her realize how powerful—and lucrative—such work can be. The sequence in which Ramona and another stripper (Cardi B, a proud, Latina product of the Bronx like Jenny from the Block making her charismatic film debut) teach Destiny the finer points of pole spinning and lap dancing is hilarious and actually kind of sweet, and it’s an early indicator of the way these ladies look out for each other.

The money is good for a while, especially with Ramona and Destiny working together as a seductive duo in the champagne room. But then the 2008 recession hits—and it hits the Wall Street jerks hard, which means they have less cash to toss at people’s posteriors. The crazy, addictive energy of the film’s beginning eventually gives way to a more low-key tone as work dries up, the dancers go their separate ways and Destiny gives birth to a baby girl.

But desperation also inspires Ramona’s scheme to go after even bigger money: concocting a potent mix of MDMA and ketamine, sprinkling just a dash in the drink of an unsuspecting mark at a bar and then dragging him back to the strip club to drain his credit cards. (The drug-cooking sequence in the kitchen of Ramona’s minimalist Upper East Side apartment is lively and humorous but it also provides another unshakable “Goodfellas” comparison.) Ramona and Destiny recruit a couple of trusted fellow dancers—Keke Palmer’s Mercedes and Lili Reinhart’s Annabelle, who add to the cast’s chemistry—to create a diverse lineup of sirens, and the nightly heists kick into high gear.

Scafaria doesn’t seem terribly interested in examining the morality of the women’s crimes. She suggests that these guys have it coming to them by virtue of their chosen profession; they’re crooks and scam artists themselves, albeit of the white-collar variety. They’re also obnoxious, awful human beings for the most part, which seems to justify the women’s actions, as well. Rather, we’re meant to root for these hard-working ladies to bask in the glory of their much-deserved riches. It may seem shallow, but Scafaria makes a persuasive argument in amassing such a likable ensemble.

Ramona is, of course, the powerhouse driving the action; she’s both the brash ringleader and the warm mother hen, and Lopez fully embodies all her character’s contradictions and complexities. (Early on, during a chilly nighttime smoke break on the strip club rooftop, Ramona invites Destiny to climb inside her fur even before they’ve introduced themselves to each other. Who could possibly say no?) As Destiny, meanwhile, Wu gets to demonstrate more of an arc, transforming herself from wide-eyed neophyte to ruthless perpetrator. She also gets to show even more dramatic depth than her star-making performance in “Crazy Rich Asians” suggested. The teary-eyed bond between these two characters—their protective sisterhood in a world full of predators—feels unexpectedly substantive by the end, given the flashy, duplicitous nature of their dealings.

And walking out of “Hustlers,” you may experience a sensation similar to that of the strippers’ victims: You may not remember everything that happened, but you’ll know you had a great time. 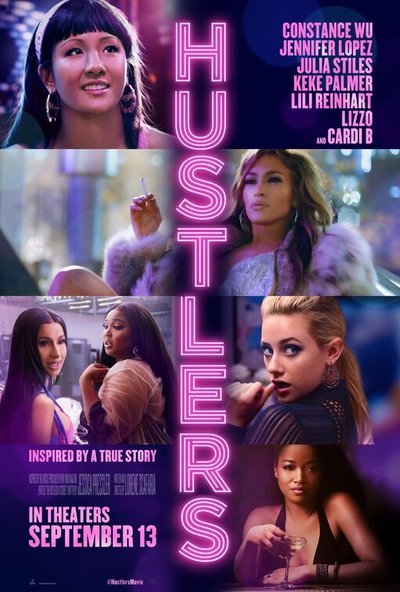 Cardi B as Diamond